A Valpo Life in the Spotlight: Vicki Urbanik 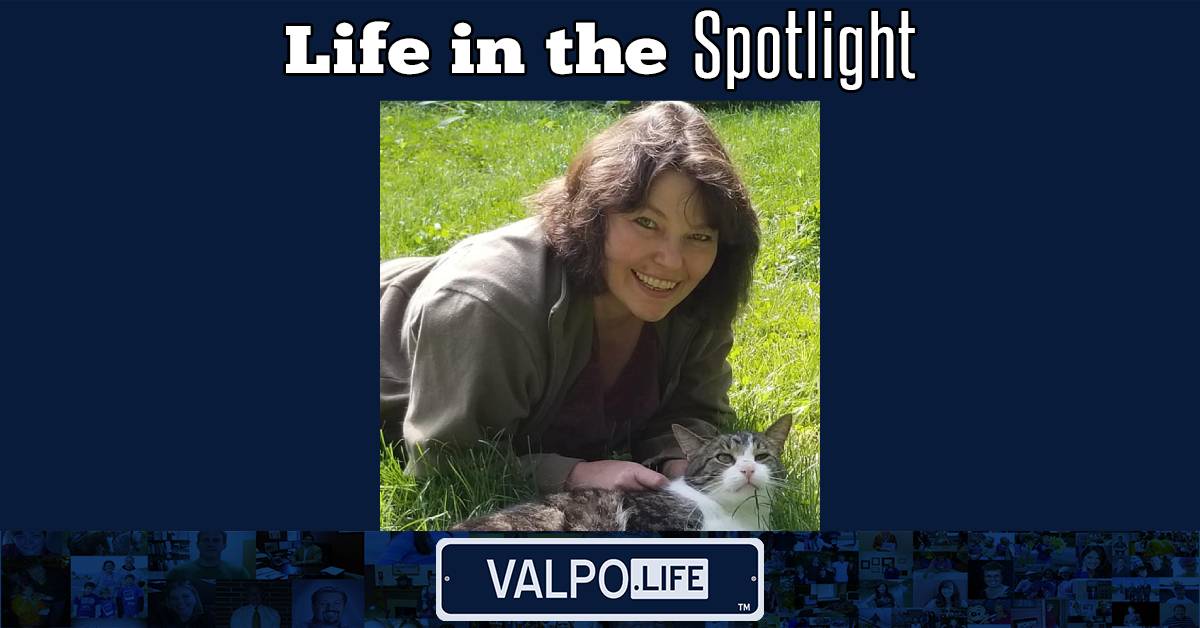 “People say political consensus is like herding cats,” Porter County Auditor Vicki Urbanik said, “which is fine with me because I’m an expert at herding cats.”

Urbanik draws from her experience as “crazy cat and dog lady,” playing forever friend to a pair of pups and 15 healthy, sterilized rescue cats, to work hand-in-hand with her local government partners to help better serve the citizens of Porter County.

Her journey into office began in 2010 when she first ran for Porter County Auditor and lost the election. But her passion for this particular brand of public service pushed her to continue her pursuit, and she was elected in 2014.

Although her journey to the office began nearly a decade ago, her path was paved in childhood. Yet, like so many who pursue their passions, Urbanik never predicted that this is where those particular passions would lead her.

“I’m doing things I never thought I would be doing,”she said.

Growing up in Whiting, Urbanik became a newspaper carrier for the Calumet Day, a weekly local newspaper, in third grade. It was her very first paying job!

“I always had a passion for print media,” Urabanik said, “whether it would take me into magazines or newspapers, but I was more of a hardcore news person so I wanted to focus on a daily publication.”

She followed this lead to Indiana University Bloomington, where she studied journalism. During her time there, one of her internships was for a college textbook company, which would come back into her life much later, when she took a turn in her career.

“I remember I didn’t know the topic, but that’s okay because you’re just proofing for grammar and style,” Urbanik said. “But 25 years later, I looked up those old books I proofed in college because they were suddenly relevant to me.”

While Urbanik was studying at IU, she worked at the student newspaper and decided to take some time off to work for a number of newspapers, including Calumet Day, and then at the Times of Northwest Indiana. She eventually went back to finish her degree because she was, “getting all this experience but still didn’t have that piece of it.”

After graduating from IU, Urbanik didn’t really have a job lined up. In fact, her big plans were to travel out to Red Rocks, Colorado, to catch the Grateful Dead concert.

“IU School of Journalism had a great placement program and they contacted the Chesterton Tribune on my behalf, who in turn reached out for an interview,” Urbanik said. “I fell in love with the place instantly because it had that gritty newsroom feel, and then Jerry Garcia fell into a coma so I actually never made it out to Red Rocks because the shows were canceled.”

Urbanik worked at Chesterton Tribune from 1986 until 2012.

“When I first started working as a local journalist, I did what most reporters did: I covered just about everything. Features, hard news, police beat,” Urbanik said. “Eventually I settled in as the county government reporter, also covering the local school board and environmental issues.”

“I absolutely loved all of my beats,” Urbanik said. “Covering county government, I went to numerous meetings. As time went on, I became intensely interested in local government finance – to the point that it was all I really wanted to report on. Frankly, most readers want to read a feature about great accomplishments or charity or crime beat. They don’t want to read budgets and taxes. But it was a topic that intensely interested me.”

“I felt I needed to pursue this interest, and one thing led to another,” Urbanik said. “First I wanted to see if I could learn more about assessing: how is property assed? I took the courses, enjoyed it and did well, so I became certified as a level 2 assessor.”

Almost on a lark, Urbanik decided to follow this thread. She signed up for a couple accounting courses at Indiana University Northwest. For the first time in 30 years, she was back on campus. She laughs at how she was late to her very first class back, missing nearly half of it, because she got lost.

“It was very embarrassing at the time,” Urbanik said. “Looking around, all of these students could’ve been my son or daughter, but it didn’t matter.”

“Education is so important,” Urbanik said. “It doesn’t matter how old you are if you want to pursue a new direction.”

Finally, she committed to the program. Although she had a slew of amazing professors, one in particular drove her to seek what she calls “the big enchilada.”

“I never even had an inkling that I would pursue that,” Urbanik said, “but I ended up becoming a CPA!”

Although she loved working for the Chesterton Tribune, it became clear to Urbanik that it was time for her to go through a mid-life career change and pursue this other interest.

“I’m very appreciative of the voters for giving me this opportunity to serve,” Urbanik said of her election to the office of Porter County Auditor. “The job is very intense, and every day is busy and exciting. No two days are alike.”

Urbanik uses her office to demystify the criteria and present the facts and opportunities in easy-to-understand terms.

She is also particularly proud of her team’s ability to use that straight-forward communication style to improve the flow of government.

“Our office emphasizes cooperation with other offices regardless of politics or other issues,” Urbanik said.

This year, for example, Urbanik hosted a one-on-one onboarding and training session to get new officeholders up to speed. The greater understanding gained by these initiatives creates efficiencies that help improve how the local government operates.

Similarly, Urbanik is leading the charge, getting ahead on a forthcoming state-level change. By working on it ahead of time, Porter County can be one of the few counties that does not have to outsource implementing these updates.

“It’s a really big project,” Urbanik said, “but keeping the work in-house is going to save taxpayers hundreds of thousands a year.”

Urbanik’s commitment and drive have opened other doors for her as well. She is currently serving as the Vice President of the statewide County Auditors Association, and is on track to become its president in 2021.

Urbanik’s early passion for hard-hitting daily news led her to pursue a degree in journalism. Her varied beats uncovered her interest in local government. Her courage to pursue this interest in assessing led her to run for, and eventually win, office.

From day one, though, it is clear that Urbanik’s true passion has never changed: pursuing and understanding of complex, somewhat concealed information and making it plain and easily digestible. For Urbanik, it’s a life’s work. For the public, it’s a valuable service.