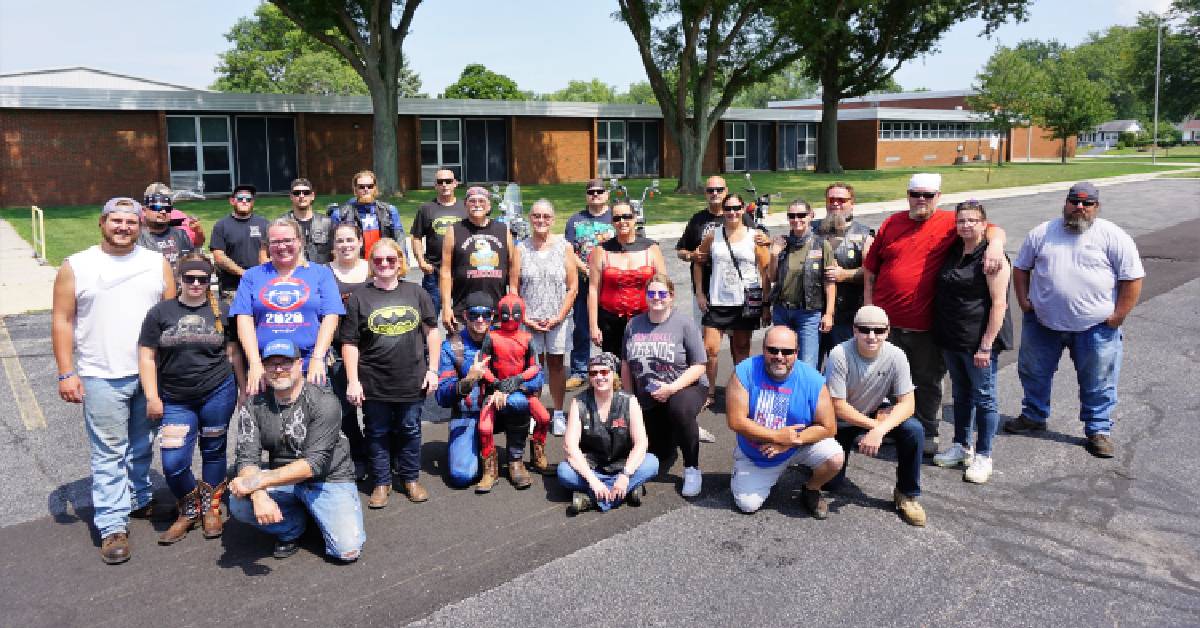 South Haven residents may have been confused this past weekend, hearing what sounded like thunder on a clear, sunny Saturday. But the sound was not from inclement weather. It was just a group of your friendly, neighborhood motorcycle riders, gathering together to raise money to support Toys for Tots.

The event—the first of its kind for the South Haven area—saw dozens of riders, some of them dressed in their favorite superhero garb, gather at the parking lot at Saylor Elementary School before taking off, rumbling through the streets of South Haven and waving to people gathered in their yards to watch as the two-wheeled caravan wound its way through their neighborhood.

Event organizer and South Haven resident Jeff Riley said that he wanted to do something to give back to the community, and especially to Toys for Tots for all the good work they do.

“This year has been particularly rough on many families around the country,” said Riley. “I just wanted to try and do something to hopefully be able to help out some of those families who may be struggling this upcoming holiday season and maybe take a bit of a load off their minds.”

Riley led the ride aboard his 2015 Harley Davidson Softail Breakout.

“We’re doing this for the kids really, that’s what it’s all about.”

Riley, himself a father of nine, said that the charity was near and dear to his heart, having helped his family out in their own time of need in the past.

“Toys for Tots is just a great organization. They helped us out when I had all of my kids at home and lost my job. It’s an organization that puts kids first,” said Riley. “A child’s smile means everything.”

Helping to organize the ride was Jamey Allen, also of South Haven.

“Originally, this was going to be a Halloween ride, but I suggested that we should maybe do it sooner, so we came up with the idea of a summer ride, with riders invited to come out dressed as superheroes for the kids,” said Allen, who was already looking forward to the next event.

“We’re looking still to do another ride closer to the holidays, and we’re hoping to make this an annual event, here in South Haven.”

After the ride, Riley invited participants to meet up at his house for refreshments and camaraderie, with cookies and water generously donated by Family Express and pizza donated by Verona Pizza.

Ryan Gilliand, owner of Verona Pizza and Wings in Portage, who rode his own motorcycle to the event, was happy to give back to the community that supports his business.

“We’re a local business, and we deliver to this area, so we wanted to get out here and donate to the cause here,” said Gilliand. “Anything that we can do to help strengthen the bond between local businesses and the communities they serve is a win-win.”

Also on hand to support the cause and help feed the group of hungry riders was Monica Jimenez Susoreny of Las Mamacitas, who brought her delicious Mexican fusion-style meals, featuring tacos, quesadillas, tamales, and Mexican bowls.

Jimenez-Susoreny said that she understands the importance of organizations like Toys for Tots, and knows first-hand how much their work means to those helped by the charity.

“After my first divorce, I was on my own as a single mom with two young daughters,” said Jimenez-Susoreny. “I know what it’s like to struggle, trying to raise young children and to have to deal with the pressure of the holidays. It means so much to me to be able to support an organization that helped to support me, and we’re just very happy to be able to do that.”

If you missed the event but would still like to donate, both Riley and Jimenez-Susoreny will be accepting donations of cash or toys through October. Riley can be found on Facebook at https://www.facebook.com/jeff.riley.10420.

Additionally, Las Mamacitas will have a donation box on their food truck and at their pop-up locations throughout Northwest Indiana. You can follow them on Facebook at https://www.facebook.com/lasmamacitasnwi for times and locations to make a donation.

For more information about Toys for Tots, you can find them online at https://www.toysfortots.org/