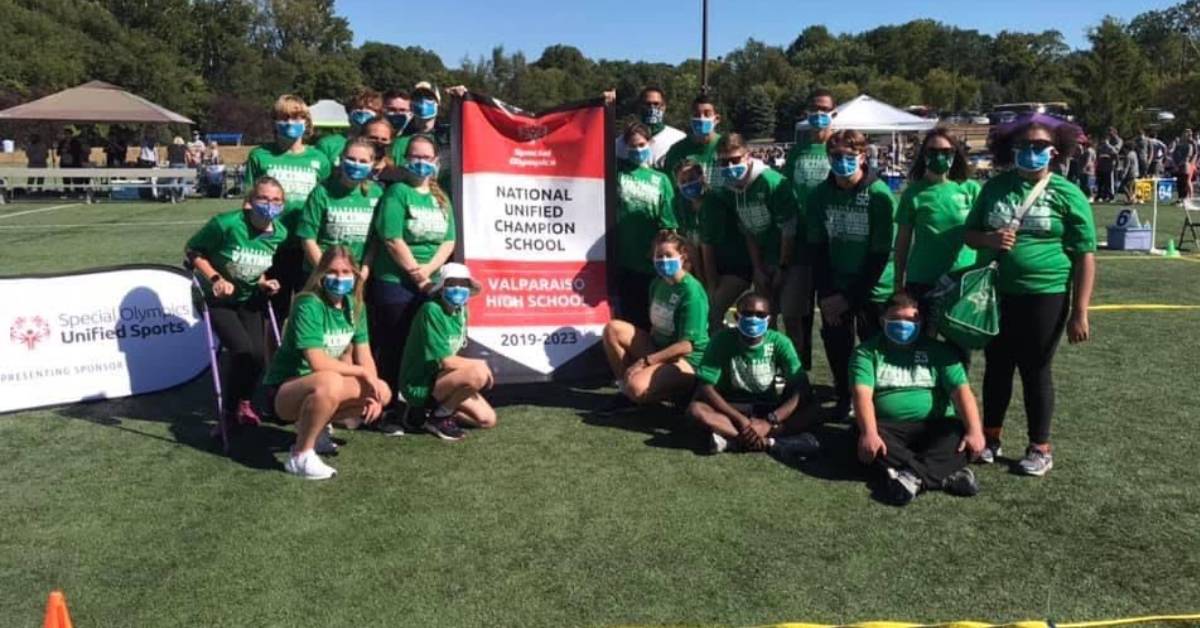 Unified Sports started as the brainchild of Robert “Beau” Doherty, Special Olympics Connecticut President, and transformed into a global movement that continues to change the lives of students and athletes everywhere. The program was designed to foster an environment of inclusion, and brought students with and without intellectual disabilities together to compete collectively in sports. Since its inception, Unified Sports programs across the country have given opportunities to countless students, and one of the most noteworthy programs sits right in our own backyard.

“A few years ago, students at Carmel High School advocated for inclusion at their school, and started their Unified Sports program. We joined the program after them in its third year,” said Coach David Prokop, Head Coach for the Unified Track and Flag Football programs at Valparaiso High School. “Our former principal asked if I’d be willing to take this on, and I immediately thought it was a great thing for our students.”

Prokop had high hopes for Valpo Unified from the start, though initially kickstarting the program proved to be a more challenging task than he anticipated. A mere seven students showed up to the first call out meeting, but Prokop was undeterred, and resolved to get as many kids as possible to join the program in its inaugural year.

“I remember telling each of the seven kids that showed up that day to just bring two more people with them next week,” Prokop said. “We ended up with about 15 kids the following week, and with our numbers doubled we proceeded with our first season.”

By the time their track season was in full swing, Prokop had a squad of 30 students competing. The group performed fairly well, making it to regionals in their first season. They carried that momentum into their second year, expanding their numbers to 50, though year three is when the group really began to see major growth.

“In our third year we started gaining momentum. We had 90 kids on the team, and ended up going to the state championship in track that year,” Prokop said. “We won state as a team, earning the IHSAA trophy and state rings for each athlete. That’s when things really blew up, and we began to see this transform from a sports thing to something that was really embraced by the entire school and community.”

Valpo Unified became a schoolwide conversation, its message carried home by the story of a young athlete that came to speak to the entire Viking student body. He shared his story of running the marathon, and how he became the first Special Olympics athlete to complete the 26.2 mile race through the opportunities afforded to him by Unified Sports.

“It was so quiet in that room you could hear a pin drop,” Prokop said. “I’ve never seen a group of 2,000 kids more silent. That young man’s story captivated them, and really made them understand what Unified is all about, and the enormous impact it has on people’s lives.”

Even in the relatively short time since its inception, Valpo Unified has experienced countless stories of inspiration.

“During track season one year we had an athlete who used a walker, and he asked to run our longest event of one lap around the track,” Prokop said. “Usually no one wants to run the longest event, but he volunteered, and watching him complete that entire lap with his walker was incredible. Giving kids opportunities to accomplish something like that, that’s why we do what we do.”

Another one of the program’s greatest experiences was the drive back from competing at the state track meet in Bloomington, or perhaps more accurately, what greeted the team as soon as they made it back into Region territory.

“We had a police escort as soon as we got into Porter County, and then a squad of firetrucks picked us up at the local Von Tobel store,” Prokop said. “We drove through town with community members stopping and waving at us, cheering us on. In moments like those, you think as a coach that these are going to be some of the best, most defining moments of those kids’ lives, and some of the best moments in my own life as well.”

As the program grew, a ripple effect was felt throughout the school and community, sparking efforts for inclusion outside of Valpo Unified.

“We had a signature page at lunch for people to sign if they agree about inclusion – it had over 1,000 signatures,” Prokop said. “We saw students create a campaign to end the ‘R’ word, general education students high fiving and engaging with students in our special education program, developing relationships they might have never had without Valpo Unified. The impact and how quickly the student body embraced not just Unified Sports itself, but also its core message of inclusion has been incredible to see.”

With 150 athletes, Valpo Unified grew even larger last year, and was set to have another incredible season before the COVID-19 shutdown. Despite the pandemic, Valpo Unified’s consistent success has earned the group some well-deserved recognition at the highest level.

The program earned a National Champion banner, awarded to just 155 schools across the country and eight schools in the state of Indiana. They were presented with the banner at the state botchy ball meet, which the team also won.

Finally, just a few weeks ago, ESPN released their list of Special Olympic Unified Champion honor roll schools, aimed at recognizing programs across the country that performed exceptionally well in their goals of creating an inclusive school climate. Representing the state of Indiana was Valpo Unified.

“When the ESPN article came out that was when we realized that this is even bigger than we thought,” Prokop said.

What started as a way to bring students in special education and general education together became a way to give all students a chance to represent their school through sport. Now, it has become something larger than that entirely.

“This is so much more than just sports,” Prokop said. “It’s how are these kids interacting at lunch – sitting at the same tables now – it’s walking in the halls and seeing students giving high fives that you normally wouldn’t see, and an entirely new schoolwide culture of inclusion that comes organically. That’s the focus now – those relationships and how our kids are treating each other.”

In Prokop’s eyes, this level of success could never have been achieved through his efforts alone, and he attributes much of the program’s well-rounded and consistent growth to the staff that helps make it possible.

“I’m just a very small piece of this, and we owe so much of our support to countless parents, teachers, and students. Sarah Albers and Katie Vettickal, our sponsors from IHSAA and Special Olympics, have also been a tremendous help. They’re the real reason why we’re where we are now, I’m just lucky enough to oversee it,” Prokop said. “What started with me and seven kids is now a whole family. It takes a village to get it done, but we’re moving in the right direction and we’re doing it together.”

Valpo Unified is now looking towards the future with continued growth and methods for inclusion in mind.

“Indiana is kind of leading the pack with this in comparison to where some other states are at, and we’ve certainly got some big things planned moving forward,” Prokop said. “We’ve come so far already, and it’s not going to stop any time soon. The future is bright, and we could not be more excited.”