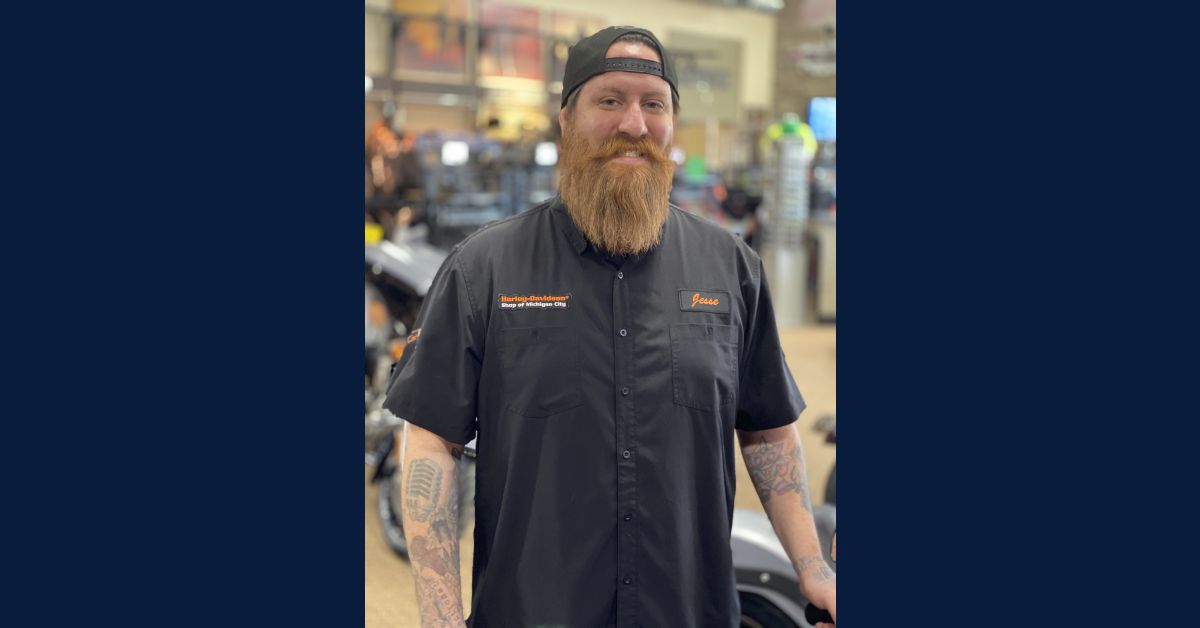 Harley-Davidson motorcycles have been a staple in Motorcycle Sales Manager Jesse “Redbeard” Oliver’s family for years.

“I grew up on the back of my dad's 1977 Harley Davidson Shovelhead Lowrider,” he said. “I was eight years old when I got my first ride on the back of it. My dad, his sister, my uncles, they all rode Harley Davidsons. When I was a little kid, it wasn't unlikely to see six to 10 Harley-Davidsons out in front of the house when we're having a party because everybody rode, so I grew up around it.”

Oliver joined the Harley-Davidson family in 2014 at the Calumet location in Munster, Ind. and quickly worked his way up to sales manager. He heard about the job opening from his stepmother and knew this was an opportunity he couldn’t pass up.

“She had mentioned that Calumet Harley was looking for some people,” he said. “I was a DJ working at a dry cleaner and playing with my band, so I was kind of getting by while trying to figure out what I wanted to do. So when this happened, I was like, ‘Oh my God, I gotta go for it.’ and the rest is history. It just became a perfect fit and grew from there.”

Oliver was also excited to accept the position since he knew how much it would mean to his family.

“I was so proud when I got the job and to tell my parents and my family about it because I know how big of fans they are of Harley-Davidson,” he said.

Oliver was at the Calumet Harley-Davidson location until it closed in 2020, but General Manager Jeff Haggerty easily helped him relocate to the Michigan City shop, and Oliver has been working there ever since.

“I got with Jeff, the general manager over here, and he got myself and a few others right away into the Harley-Davidson shop of Michigan City, and we started working there. He grabbed a handful of other employees from Calumet and took them over to Valpo, and the rest is history. I've been here since then,” he said.

While the transition took a bit of time to get used to, Oliver was able to quickly adapt and has greatly appreciated the opportunity to work at both locations.

“We all embrace it and we enjoy our co-workers that we work with and the dealership we work for. We still have love and are still big supporters of Harley-Davidson,” he said.

Since Oliver grew up with the brand, he said working for Harley-Davidson has been a dream come true. He also enjoys working with customers and likes that his position allows him to be more personable with them as well.

“Working in sales, dealing with the public, and dealing with other like-minded individuals that like Harley Davidson is always fun. You’ve got to be a people person; you’ve got to like people to be in this industry. Otherwise, what are you doing? That's all you're doing is dealing with people,” he said.

When he’s not at work or cruising the Region on his motorcycle, Oliver said he's an avid gamer and also enjoys spending time with his family while cheering his kids on at their sports games.

“It's fun watching them learn and get good at a sport. It's this cool thing to witness and see,” he said.

Oliver encourages anyone and everyone to come on over to the Michigan City location to catch up, say ‘hello,’ and see what’s new.

“If you haven't been here in a while, come on out,” he said. “Come see us because there's a lot of new faces and a lot of good people to meet. We're here to meet and to serve the Northwest Indiana and greater Michiana area. There's a lot of stuff that we offer that maybe in the previous years you couldn't get. We have a dynamometer machine installed now so we can do motor work, and we could tune your bike in and get it all dialed in now. So, come and see us.”

For more information on Harley-Davidson of Michigan City, visit https://www.hdmichigancity.com/.