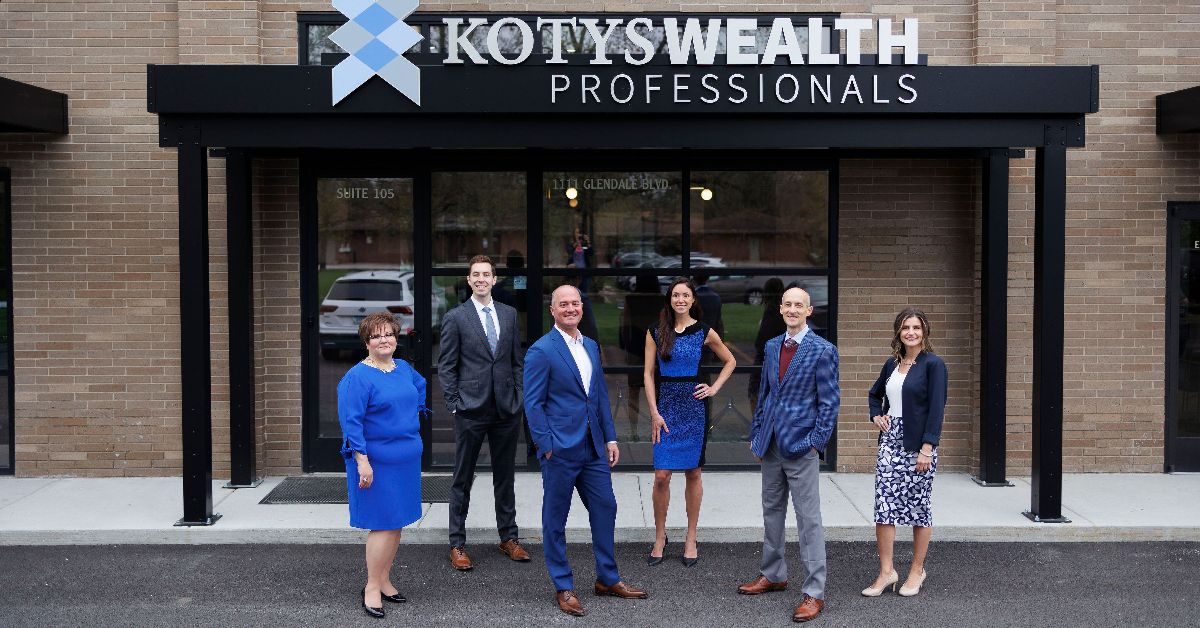 When young, married couple Wes and Sarah Kotys first established their financial planning business in 2007, they could not predict the rate at which growth would take place. Now 14 years later, after a few transitions within their original location, Kotys Wealth Professionals has made a bittersweet move to an exciting new location.

“We had been in Napoleon Center since 2007. Starting out on the main level, we were in three or four different suites within that building over the years,” said Wesley Kotys, CFP®, AAMS, Founder and CEO of Kotys Wealth Professionals.

It was from this small spot within the Napoleon Center that Kotys Wealth Professionals hit the ground running. With a client centric business plan, they stayed focused on the important things: building relationships and striving to make their community better. From there, it was simply a natural progression to outgrow the original space.

Now, as a team of six, Kotys Wealth Professionals has relocated to a larger modernized building about two miles Northeast at 1111 Glendale, which is historically known as “The Times Building.”

During the transition to their new location, Kotys Wealth Professionals stumbled upon a welcomed revelation. It came while saying goodbyes to its former mail carrier (Mr. Daily) at the downtown Valparaiso location.

“He asked us where we were going and then he said, ‘Oh, you’re moving from where The Times started to where they have been operating these last several years.’ Surprisingly, this is the first time it was brought to our attention. This discovery led us into doing a little bit of research, and we thought it was kind of unique and interesting that we started our business in the same building where The Times started. And now, our new building is where they will one day be finishing up.” Sarah Kotys said.

The Times Media Company operated at 1111 Glendale from 1972 until 2020. Before its move to 1111 Glendale, The Times was located on Lincolnway at the site which is now the Napoleon Center-the same Napoleon Center Kotys Wealth Professionals got its start. In addition, Associated Pediatricians have now joined Kotys Wealth Professionals within the building, as their new buildout has come to completion.

“It’s always nice to revitalize an iconic building and location. You know, it’s fun to build something brand new, but I think there’s a unique appreciation that comes with being part of a redevelopment. Creative design allowed for us to put our office in one of the newly created three suites. We now have a much more modern office space with room to grow as we hire the next generation of financial advisors and wealth manager,” Wes Kotys said.

The move to 1111 Glendale was just as much a team effort as everything else Kotys Wealth Professionals does. The entire team pitched in to make the space ready for business.

“We definitely were a team through this whole process-everything from building desks and chairs to cleaning together; whatever it took to move into the space,” Wes Kotys said.

Now that Kotys Wealth Professionals is fully up and running within the new space, they look forward to expanding their services with the same team mentality that has carried the company forward since inception.

If you want to learn more about Kotys Wealth Professionals and the services they offer, visit https://kotyswealthpro.com/. To schedule an initial conversation, contact the office directly at 219-465-6924.