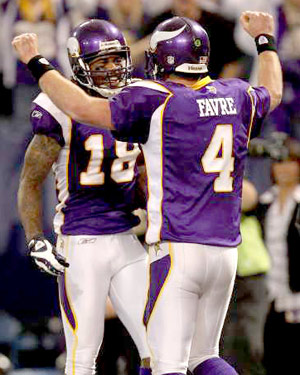 The Superdome will be rocking come Sunday's big match-up.

So, the NFL Championship Weekend is upon us; the last weekend we can really watch football again until the fall.

Sure there is the Pro Bowl next week, but who cares about that? The Super Bowl is usually exciting, but what makes the Super Bowl so much fun is all of the festivities around it: the build up, the commercials, the food, the parties-- it seems everything but the games are memorable.

We've already covered the early game between the Colts and the Jets, but let's take a look at the late game: the Saints and the Vikings. Before we begin, though, I feel like I need to get something out of my system. Ahem,

Ok, we're done with that. I promise. Why? We know what we're going to get from Favre this game, and the same with Brees. Plenty of good plays, some out of the pocket throws, an interception or two, but generally good play all around.

To me, there are other, much more pressing questions about this game. Let's take a look at four of the biggest questions facing the NFC Championship Game:

Which Reggie Bush will show up on Sunday?
Last week against the Cardinals, Reggie Bush looked like some sort of hybrid between Gale Sayers, Eric Dickerson, and a tornado. Just destructive. But can he capture that same intensity and style of running that made the Saints virtually unstoppable last week?

In college, Bush was the best running back I had seen in my life. His You-Tube highlight clips are unreal. I think the 2010 Playoffs are the time when Bush makes The Leap.


Remember how good Reggie Bush was in college? He may be making the leap in the pros.

Which player has the biggest stake in the game?
You thought this was going to be where I give in and talk about Favre, right? Wrong. Darren Sharper is the key here.

Look back at the man’s career: eight seasons in Green Bay, where he faced off against Favre every day in training camps, preseason drills, and practices (not to mention winning three Pro Bowls). Then, he leaves Green Bay in favor of Minnesota, where he enjoyed another Pro Bowl season, under the watchful eye of current Vikings coach Brad Childress and current defensive coordinator, Leslie Frazier. There too, he went through training camps, preseason drills, and practices against the Vikings’ offense.

If there is anyone who knows more about the Vikings and Favre, it’s the Saints’ 2009 Pro Bowl safety and Defensive Player of the Year candidate, Darren Sharper.


Jared Allen and his mullet are looking to wreak havoc on Sunday.

If the Vikings are going to win, what matchup matters most?
Jared Allen vs. Jermon Bushrod.

Drew Brees will be on the run this weekend if Jared Allen has anything to say about it. The Vikings’ stellar pass rusher will be facing off against the Saint’s left tackle in… Jermond Bushrod. Bushrod, for those who don’t follow the Saints, is New Orleans’ backup left tackle, and was thrust in to the Saints’ starting role after starter Jammal Brown was hurt early in the season.

So, if the Vikings are going to win, they are going to have to take advantage of their strength in the league’s best pass rusher going against a backup left tackle. What does this mean? Blitzing, blitzing, and more blitzing.

While Bushrod may not be the worst left tackle in football, shutting down Allen will prove difficult, if not impossible. The Saints have done a good job so far adjusting to the depleted left tackle position so far this year, moving Brees out of the pocket and taking advantage of quick routes. If the Vikings can block the Saints’ receivers at the line of scrimmage and prevent them from running those quick routes, its going to be a long day for the Saints, Brees, and Bushrod especially.

If the Saints are going to win, what matchup matters most?
The Saints’ “12th Man”. Normally, I’m not big on those “The Crowd is Playing a Huge Role in this Game” angles, but for this game, it matters.

When you have a rabid fan base in New Orleans, in a dome, rooting for their team that has never made it to the Super Bowl before (and only came this close once before), then you will have a deafening crowd that is sure to cause some disruptions to the Vikings.


Brett Favre may be the main story, but he isn't the key to a Vikings win.'.

Normally, I wouldn’t say this is the *key* match-up for the Saints, but when you factor in Brad Childress (by all accounts, a bad coach), along with recent spotty offensive line play (we’re lookin’ at you, Bryant McKinnie), then you have some ingredients for a long, penalty-plagued football game for the Vikings.

All season long, this was seemingly the foregone conclusion for the NFC title game. These are two franchises with outstanding offenses, good defenses, great fan-bases, and it should really be a treat watching these two teams play. I’ve got the Saints in this one just because they’ve got all the tools. They have a great quarterback, three good running backs, four good wide receivers, two good tight-ends, a good offensive line, and an above-average defense that isn’t going to stop the Vikings entirely, but will certainly cause some problems along the way.

So enjoy this weekend, it’s the last time you can enjoy an entire Sunday of football until the fall.