A Valpo Life in the Spotlight: John Gildein 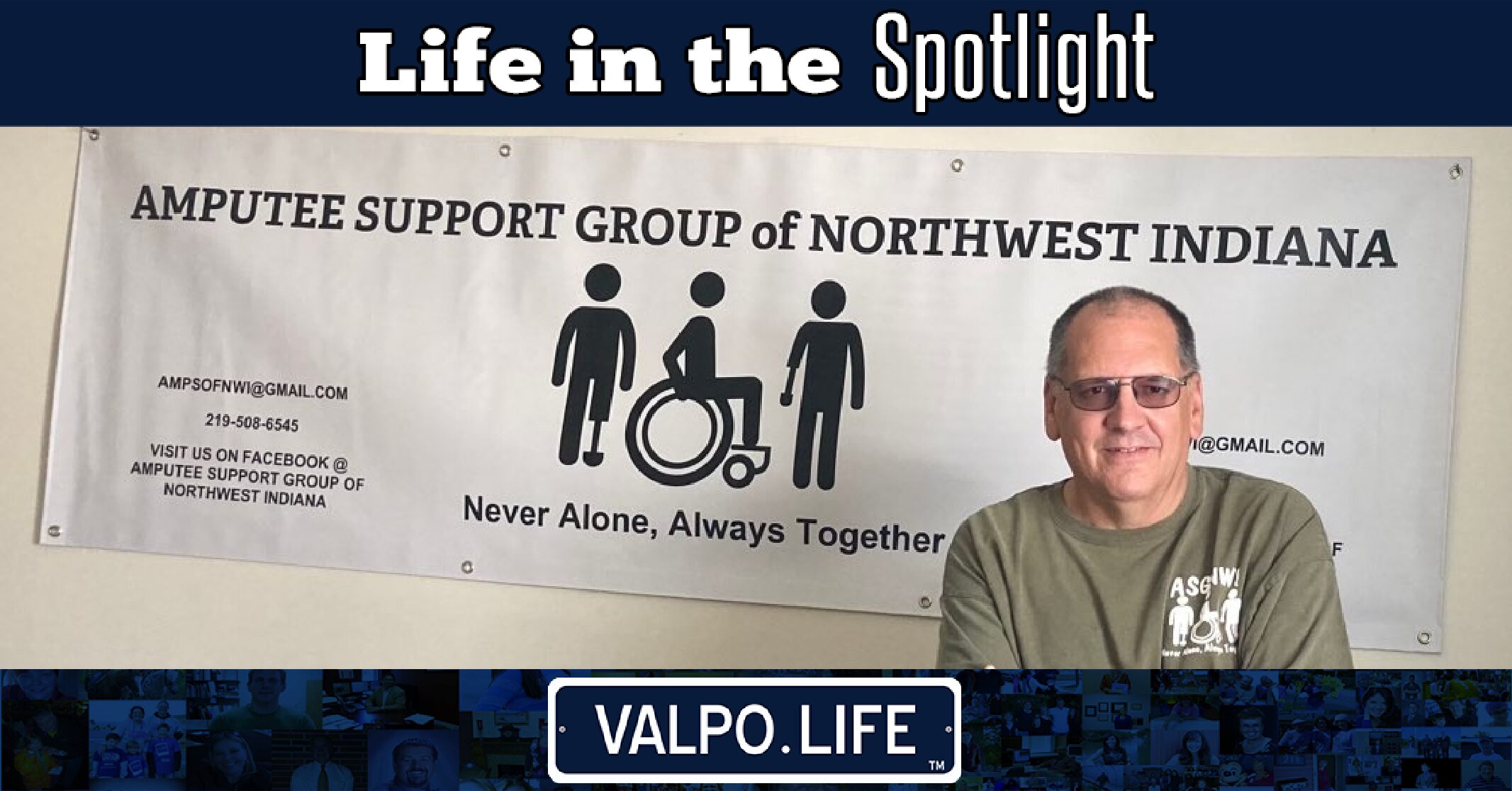 Life’s a good pitcher, in that it’s good at throwing anyone and everyone curveballs. Those tricky pitches can be aimed at anything, too — one’s work life, their health. While these challenges exist for everyone, there’s one man in the Region whose pluck has never been in jeopardy: John Gildein, member of the Amputee Support Group of Northwest Indiana as a support leader.

Starting in 2017 as a small support group in Porter County, Gildein had plans to expand. After he renamed the group to what it is now, people from all over — Wheatfield, Jasper County, Lake County, etc. — began coming together in order to share their stories. From day one, there’s always been someone there, and Gildein himself is one of those selfless leaders.

“We’ve really been going since about 2018. Since then, I've been collaborating with the Amputee Coalition, which is based out of Washington, D.C. They've helped me launch our group, and have given me a lot of information, whether it be about Facebook or all of the other information just floating around on the internet,” he said.

It was an accident Gildein had experienced that first got him on this path of healing. When he was trapped in those traumatic times, he knew he needed a voice to preach pain with, a helping hand that would continually hover near his heart in the pursuit of his assistance. Times like those call for people that one can relate to, people who’ve been through the same processes.

“I became an amputee after I had a traumatic accident, and I was looking for somebody that had been going through the amputation process, because I didn't know anybody. As I was looking for a group that would support me, I found that the closest one was in Munster. With the fact that I couldn't drive, I was constantly depending on someone to drive me there. I went twice, and then I decided, ‘You know, this is something that needs to be brought up here in Porter County,’ which is really what compelled me to start the group. Now, we meet at the library on the fourth Saturday of each month. We originally started on Tuesdays, but we moved it to Saturdays so that we would be able to have more people come out, and it has since grown from that point,” Gildein said.

Making his way through those dark days of his own, his own troubled times, Gildein’s faith never faltered. He always held on to the hope that he’d get through it — with the help of his praying, that is.

“My spirituality, my God has gotten me through all things. When I was really going through it all, he’s the one that allowed me to remain calm and stray away from me getting anxious, or excited about any of the procedures or steps of recovery. He kept me home, and, since then, it's really all been more of a spiritual growth than it has been a physical growth,” he said.

It’s been a few years now, and it’s safe to say that Gildein’s maintained a steady flow of balance in his life. Shortly after his amputation, he got back on his bicycle, riding thousands of miles since. When he’s not cycling, Gildein indulges in woodworking. Even his hobbies transcend the boundaries of his personal life, as they have a monumental way of influencing others.

“Ever since my childhood, I’ve wanted to do a radio show, which is why I'm doing a podcast right now. I'm doing a podcast for Men's Ministries here in Valparaiso, though it's a nationwide podcast as well. It’s called 'HUDDLE UP,' and it’s available on Spotify. It’s all about, mostly, growing God's community,” Gildein said.

The accolades are evident. Recently, Gildein was asked to be on the Disability Awareness Committee of Valparaiso. Already serving on Valparaiso’s Pathways Committee, it’s sure going to be impactful work that Gildein’s going to be doing, work that will, of course, positively benefit his community.

Speaking of his community, Gildein wasn’t lazy in recounting everything that the City of Valparaiso has to offer. Surely, he’s one that’s never short in his gratitude, one that’s extremely thankful for all that he’s been blessed with.

“Personally, my favorite thing is that Valpo’s very accessible for bikers and pedestrians. Everyone here is very much involved in the community’s affairs, very family-oriented,” Gildein said. “It’s a great place to be.”

In any walk of his life, Gildein’s sure to remember a few key truths that he takes along with him into everything he does. He’s always been one to realize some of the world’s heavy riddles.

“I just think that one of the key things I want people to understand is that a disability does not define you. That's one of the key things I can say — disability does not define you. You're still you. God defines you. You're still you, and don't ever let a disability keep you from doing the things that you love to do,” he said. “I do everything to help others and further God's kingdom, because it’s a service-oriented life I’m living. I try to serve as an example for my family and those in the community, and the same goes for the amputees in our group. I’ll always treat everyone with love and respect, and encourage everyone to do the same with each other.”

If you would like to find out more information about Gildein’s group, you can email questions at asgnwi@gmail.com, or visit the group’s Facebook page, where you can also sign up to get involved.