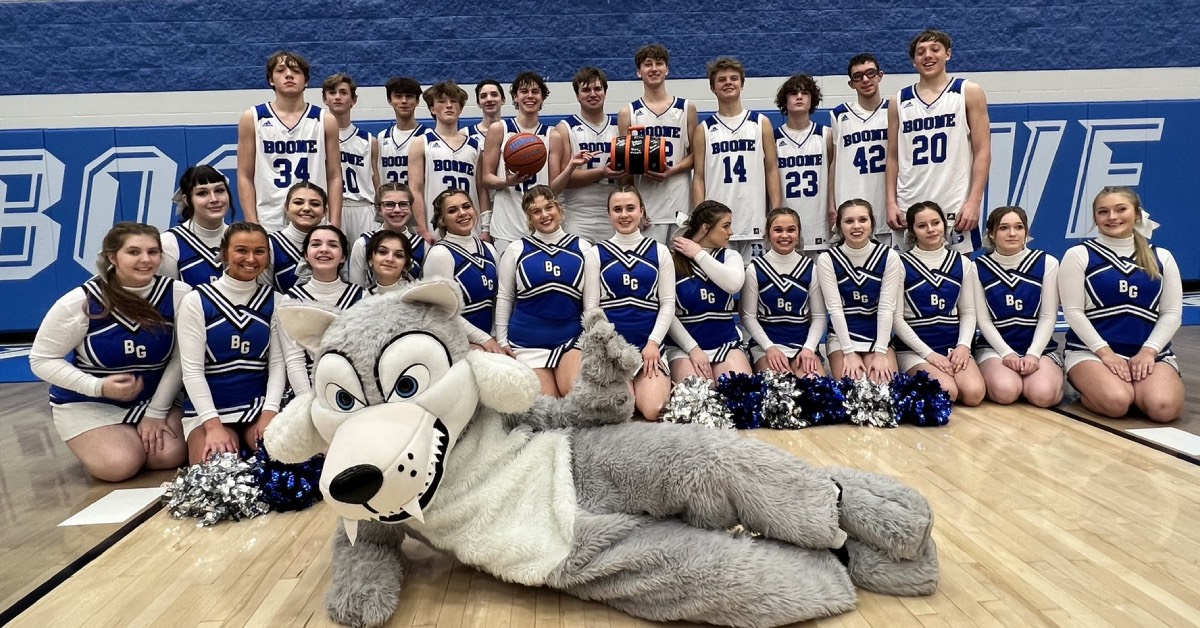 Boone Grove High School (BGHS) is a small school, but the talent that the students in this small town school have wowed the rest of the Region recently. The Boone Grove Varsity Boys’ Basketball team has proven that they can hold their own.

The season had a rocky start, but the boys have put in many hours of practice to work on improving their skills to prepare for the challenges that they would face towards the end of their season. All of the hard work paid off, though, when the boys won 70-67 against Lake Station, which had a record of 16-0. Even though the boys were down by double digits for most of the game, they powered through and won.

If that wasn’t enough, they also won the infamous keg against Westville and then kept control of it in a game against Hebron High School. These boys are powering through and proving to everyone that they can handle their own. Trey Steinhilber is a key player on this team and has recently reached an amazing goal of scoring 1,000 points in his high school career.

This team’s ability to take on a challenge and succeed is amazing to see, and everyone in the community is anxiously waiting to see what they will do in the upcoming sectionals tournament.

BGHS is not done with all of the excitement yet. The boys’ basketball team will be competing in sectionals. After that, in just a few short weeks, the spring sports will begin official practices to prepare for their upcoming seasons.

The community also shows so much support to all of the teams and are all very excited to begin spending days outside cheering for them.

On another note, the BGHS students are getting excited because they are almost in the last quarter of the year. The seniors are especially excited as this will be their last quarter of high school. So many exciting things are beginning to happen.

One of the most exhilarating things is BGHS prom that is set to be April 30. The junior class has been working very hard to make this a magical evening with the theme, "Under the Stars." This evening is something that is long-awaited by the upperclassmen and they are all thrilled about the theme.

On an academic note, the juniors are preparing to take the Scholastic Aptitude Test (SAT) which is the standardized test that is replacing the commonly known Indiana Statewide Testing for Educational Progress-Plus (ISTEP+). This is now a requirement to graduate, so all of the juniors are anxiously studying for this upcoming test which will be taken on March 3, 2022.

John Chant is definitely an impactful teacher at BGHS. He teaches social studies and always knows how to brighten his students’ day. He walks in every morning and says, “Good morning everyone, how was your day?”

Not only does he ask about everyone's day, but he also makes a genuine effort to get to know his students and what they do in their lives, whether it is student’s jobs, other classes, or just something that the students are doing for fun. Chant is always in a good mood and does everything he can to make his classes enjoyable because he truly understands how stressful school can be.

Chant is a common, favorite teacher among the students because he likes to break up the lecture by talking about movies, shows, or just how all of the topics being discussed relate back to real life. He puts meaning behind the concepts instead of just definitions.

Chant is very involved in the school besides just working there because he is the Boone Grove Girl’s Track & Field coach, as well as the coach of the Social Studies Academic Team. He makes everything he does fun, yet effective. For example, with his academic team he makes quizzes but also talks about the book and makes jokes to help break up the load of information those students are getting. He also invites the principal and vice principal in to answer random trivia questions.

Chant is a teacher that can truly relate to the students and make his class fun but effective, and that is the best kind of teacher to have. BGHS is lucky to have him a part of the staff and community.

Kelly Downham is one of the sweetest people that you will ever meet. That already makes her a great person, but she is also driven both academically and athletically. Downham is in all honors classes, dual-credit classes, and is even taking the advanced math class of calculus for college credits.

Downham not only is a success in school, but she is great at track where she throws both shot put and discus. Last year, she broke her own record in shot put to make her new personal record (PR) in discus 90’2”, as well as a PR of 31’5” in shot put. She excelled in sectionals where she placed second which qualified her to advance to regionals for discus. If that wasn’t enough, she was awarded all-conference for discus.

She is truly an overall amazing person, and that is seen by everyone who knows her. That is one of the main reasons why she was chosen for the very selective and exclusive Rainbow Staff, which is a group of students that lead a very special leadership retreat for the school.

Kelly first went on the retreat in November of 2021 and she made such an impact there that she was selected to be on the staff for the next retreat.

Downham is one of the sweetest people that will have your back no matter what and will always make you laugh when you are having a rough day. She is a truly amazing person, and anyone who meets her will be glad they did.