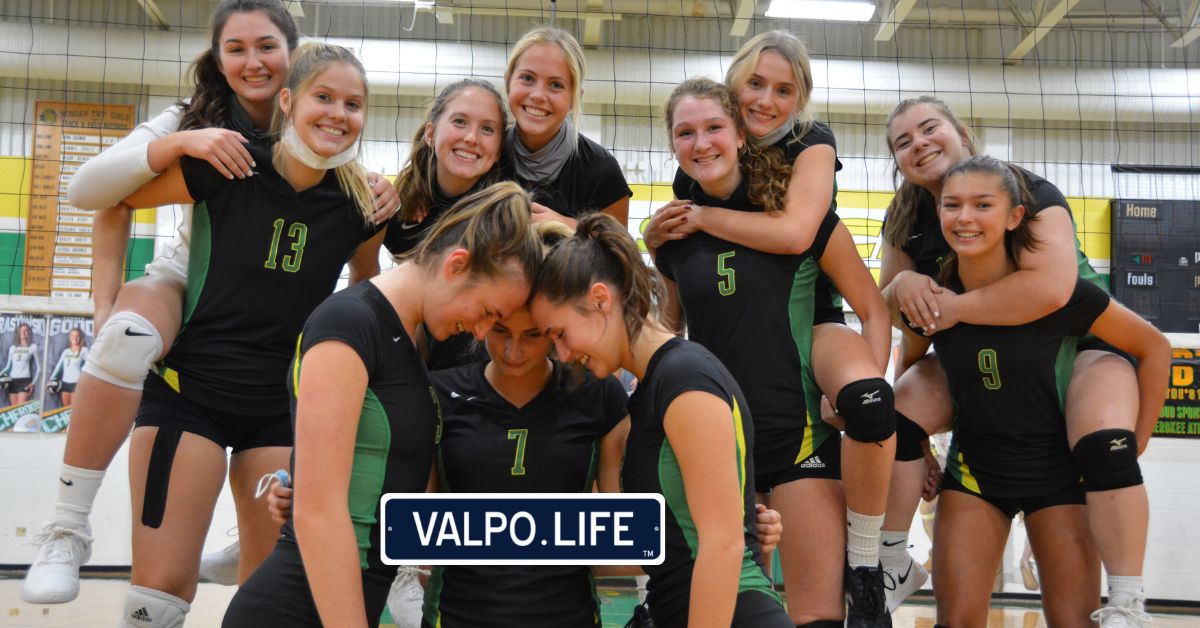 On the night of September 20, the Morgan Township High School (MTHS) girls volleyball team was pulling on everyone’s heartstrings with the girls’ senior night.

Seniors Ellie Schuck, Ally Parsons, Kaylee Dudzik, Courtney Epler, Ava Gheaja, and Karley Rocchi all brought their best game against Hebron High School and gave it their all. On the edge of their seats, MTHS fans and parents were almost leaping with joy when the final sets won were three to one, naming MTHS the victors.

However stressful the tension was, every moment is sure to be cherished by the beloved volleyball seniors. The gifts presented to each of the seniors was not only the adorable baskets, but the love and influence had on each and every one of the players that bestowed them.

Many, if not all, the underclassmen and juniors of the girls volleyball team have appreciated and have been able to count on the leadership of those older than them. Moreover, the seniors’ guidance and teachings are surely going to be passed on throughout the years to come at MTHS.

As the season is being wrapped up, MTHS girls volleyball has two away games left. Come watch and support the girls at Hammond Academy of Science & Tech, 6:30 p.m. to see the final game play out.

It is with a heavy heart that we will wish the esteemed seniors farewell on their new paths of life. They have been relished by the MTHS students, and are now off to be relished by many others in the future.

The return of MTHS’ Drama Club is bringing excitement to long-time fans of the hard work and dedication of all those involved.

For this year’s performance, MTHS Drama Club is putting on a showing of "Clue." The 1985 American mystery and comedy film about six possible murderers being caught up together in the same house is being transformed into one the theatrical reenactments Morgan supporters have come to know and love.

With iconic characters such as snarky Ms. Scarlet, intelligent Mrs. White, and the clever Wadsworth, Clue is positively going to blow away its spectators this fall!

Jeri Mateer is everyone’s favorite Athletic Director at MTHS. Although this is Mateer’s second year in the position, to say she’s been a dedicated Cherokee is an understatement to say the least. Mateer has been working at MTHS for an astonishing 24 years. Within that time, Mateer has put in her time as an instructional aid, the technology integration specialist, communication specialist, middle/high school secretary, sixth grade girls basketball coach, and seventh grade girls basketball coach. Clearly she has a passion for being a huge help wherever she is.

In the time Mateer has spent as the Athletic Director, she has loved being able to elevate the quality of the many sports programs at MTHS.

“The best part of being the athletic director is improving the environment with which our athletes compete and working with student athletes assisting them to succeed in all that they try to achieve,” said Mateer.

Mateer has been a consistent supporter of all sports throughout the years, and has been to satisfy every need of athletes and coaches, especially on the girls volleyball senior night. Mateer organized the communication between players/parents, assisted in agenda creation, led in the script making for seniors, and took extra care making the night as special as possible for seniors. Mateer helps coordinate these types of events all throughout the school year.

Moving forward, Mateer has just as loving hopes for athletes at MTHS as she does for them now.

“I hope to see well rounded athletes succeeding in academics, self care and all around good health, athletic abilities as individuals and as teams,” said Mateer.

Mateer has built her relationships among the school staff and students through all her consistent hard work. As the years and school change, Mateer doesn’t expect to be going anywhere anytime soon.

Reagan Weitzel is a junior at MTHS and a lively friend to all. Weitzel has been attending Morgan Township since the beginning of her kindergarten year. She has, for certain, given a surplus of time to the Cherokee pride!

As a talented individual, the arts are an integral part of Weitzel’s daily life. She takes part in drama club, art club, student council, honor society, German club, and the school’s choir. Weitzel evidently has a love for not only academic achievement, but for creative clubs as well.

Being proud member of drama club, Weitzel is pumped up for this year’s performance of "Clue." Weitzel will be bringing her theatrical talents into the role of Ms. Scarlet.

“Ms. Scarlett is a D.C. madam who is very interested in secrets,” said Weitzel.

Weitzel has been working very hard, along with her fellow cast members, to master the art of theater.

“I put in a lot of time into drama club. I attend every middle school practice I can and help assist in any way possible, along with going to my own practices as a high schooler. I spend hours memorizing my lines and carry my script almost everywhere I go, reading it whenever I have spare time,” said Weitzel.

Weitzel’s adoration for drama club will continue to flourish throughout her time in theater, as she hopes the same for the upcoming performers.

“I hope that many middle schoolers join and stay in drama club throughout their high school years. Drama club is an incredible experience and I hope more and more kids keep joining," said Weitzel.