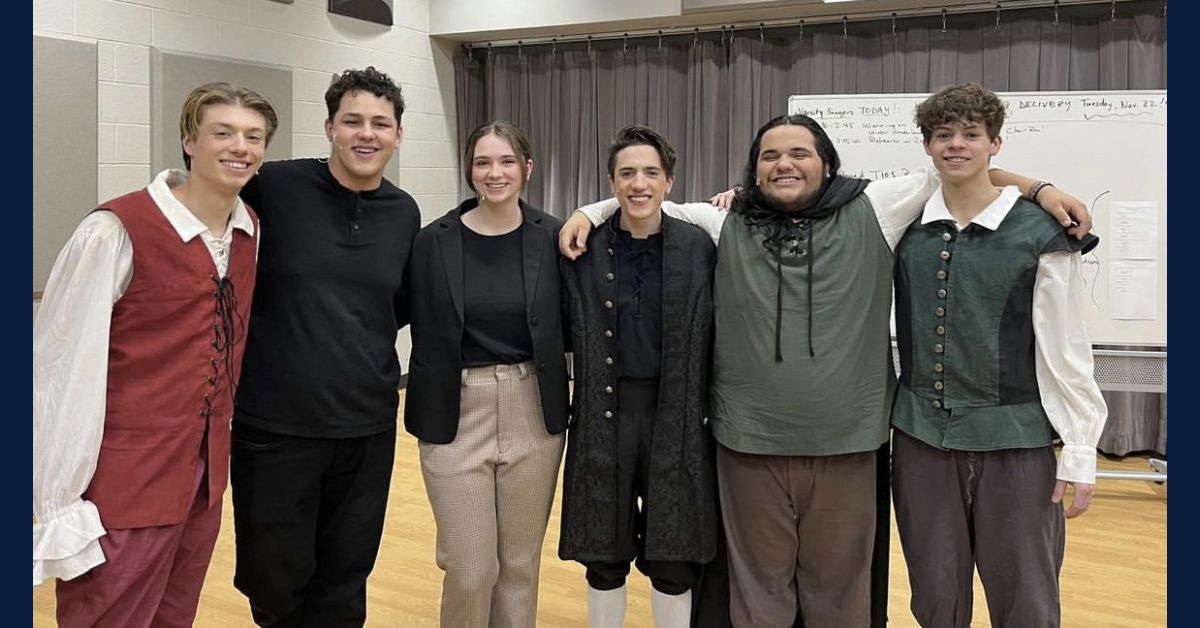 The Valparaiso High School (VHS) Drama Club has been working hard during rehearsals these past couple weeks leading up to another spectacular performance that wowed the audience.   Three live performances were presented on November 18, 19, and 20 of their rendition of "The Comedy of Terrible Errors" written by Don Zolidis.

“This was my first show, and it was a new experience to me to see everyone working hard together to put on something wonderful. It’s a great feeling to be surrounded by supportive people who all have the same end goal,” said Graham Gibson, Aegeon in the play.

The production storyline entails students who try to put on a play written by William Shakespeare, but nothing is going as planned. The set is falling apart and students are forgetting their lines. The students have to work together to finish the play.

“Thanks to Drama Club, I am more comfortable in my own shoes, and I love having a cast who is supportive no matter what. I enjoyed doing this performance because it gives the audience a little glimpse of what we go through before a show,” said Evyenia Lawley, Riley in the play.

The drama club performance would have been impossible without the behind-the-scenes club members. Emily Ogrentz, who helped with set construction and painting, loved seeing the show come together from a distance.

“You don’t have to be on the stage to be in the Drama Club. This club has helped me branch out to meet new people and experience new opportunities without ever having to be on the stage. I do plan to perform in the next production but working behind the scenes is just as fun,” said Ogrentz.

There’s a lot more to come from the VHS Drama Club. The group will focus the second half of the school year to put on its annual Mocha Madness improv show and April Antics talent show.

The Valparaiso Vikings are going to State. On Friday, November 19, the football team traveled to Fort Wayne to take on Snider High School for the Semi-State game. The game was a nail-biter, heading into overtime when the Vikings scored on the fourth down making the final score 22-21, Valpo taking the win.

“Knowing a lot of people would be doubting us gave us a lot of motivation. We knew what our potential was, but it would take day-by-day to reach our goal. Since January, we have been consistently working out four days a week to become the best team we could,” said Varsity Player Matt Hoffer.

Assistant Principal’s Secretary Kerri Molnar has been with VHS for seven years.

“Even though I mostly handle all the disciplinary actions, I also approve parking permits and guest passes for dances. I get to see students quite often which I really enjoy," she said.

When not at school, Molnar loves to spend time with her family. Family is one of the reasons she started working at VHS.

“I wanted to work in the school because of my children," she said. "I liked being part of the community, and I needed a flexible schedule to take care of my kids.”

A big part of Molnar’s family is her pets. She has a Moyen poodle and two birds.

Molnar encourages students to appreciate high school because not everyone will have another school-like experience. She herself did not attend college.

“I think high schoolers need to focus on really enjoying the time that they have now in high school. I think everyone is so busy trying to get out of high school, but you really need to appreciate teachers and the relationship you have with them. Teacher relationships will really benefit you.”

Molnar plans to retire in the next 10 or so years and live on Lake Wawasee with her family.

Senior Andrew Reyes plans to attend the University of Illinois Urbana-Champaign and major in animal sciences sticking to a pre-vet pathway.

“I am ready to graduate. I have known what I want to do since grade school," he said. "I am excited that I am so close to reaching my dreams.”

“Drama Club has been a big part of my life. Our improv show, Mocha Madness, is what originally brought me out of my shell as a freshman, specifically my improv coach. He has always been there for me and is all around a great guy," he said. "Now because of him, I will be teaching my own improv classes over the summer. Without the Drama Club and my improv coach, I don’t know where I would be today.”

Outside of school, Reyes has an internship at Vale Park Animal Hospital. He has been working with the veterinarians at Vale Park since 2016. Reyes is thankful for the opportunity to work with many different types of animals that he has received through his internship.

“The staff there are my family and always make me feel so welcome," he said. "They have watched me grow as a person and have answered all my questions along the way. They make work feel like a break in the day where I get to do what I genuinely love.”

Reyes has big dreams. In five years, he plans to be on the path to getting his doctorate of veterinary medicine in zoology science. He wants to study abroad with exotic animals to further expand his education in the zoology field.

Reyes claims that without the support from his teachers and friends he would not be where he is today. VHS will always have a special place in his heart.

“A lot of teachers at VHS touched my life in a way they could never understand," he said. "Whether it be my Drama Club director, my improv coach, my calculus teacher, or my theater teacher, they all have made my dreams possible through small, unnecessary acts of kindness that have helped shape me into who I am today.”

Reyes can’t wait to see what life in the veterinary field has for him after school.