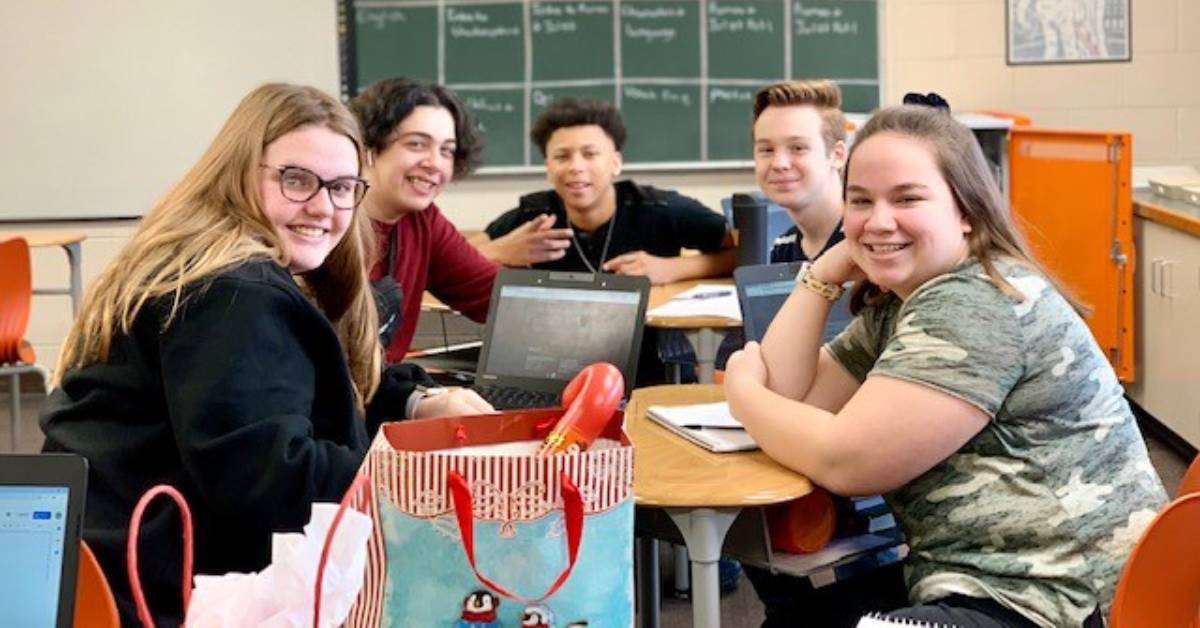 It’s a new year and a fresh start for students and staff at Westville.

January began with a bang with the Porter County Conference and the annual Sportsmanship Banquet. At the event, seniors from various school districts were recognized for their outstanding sports efforts throughout their high school careers. Many of these students happened to be proud members of the Blackhawk community.

Westville Schools started the new year after winter break on Monday, January 6. Since being back, staff members and students have been working hard to achieve their New Year’s resolutions.

If you ever happen to find yourself near the lovely part of downtown Westville, be sure to check out the 2020 senior banners. Students that attend Westville High were selected to have their photo taken as part of “Hands off Heroin”, a health organization dedicated to preventing drug use in the area.  Each year, teachers nominate students they believe best fit to represent the community. Don’t miss the chance to go see the banners highlighting some of the outstanding students of Westville.

Between helping kids learn Spanish and attending band concerts, there is one teacher at Westville High who manages to balance both teaching and his love for rock music.

Señor Gerolium has taught at four different schools, and this year is his 14th year teaching at Westville. Commonly referred to as simply Señor, he teaches the foreign language Spanish. He earned his master's degree in education from Indiana University Northwest.

“My inspiration for becoming a teacher was that I wanted to work and interact with young, insightful minds,” said Gerolium.

When Señor is not in the classroom, he likes to keep it old school by listening to metal and rock music, his favorite band being Metallica. Gerolium also enjoys golfing, biking, hosting his high school Spanish club, and watching movies in his spare time.

Gerolium inspires many of his students and encourages them to embrace the beauty of different cultures and languages. He never fails to make learning fun. When asked, students often describe Señor as their favorite teacher and one of the coolest educators at Westville. Teachers like Gerolium not only help kids gain knowledge through schoolwork but assist them in becoming the best version of themselves.

“Be kind and always try to be a nice person,” said Gerolium.

“Winners are losers who got up and gave it just one more try.” This is a quote from the very talented musician, Dennis DeYoung. This particular quote also happens to be the favorite of this month’s Student Spotlight, Jacob Griffin.

Griffin is a junior at Westville High School. He is a very ambitious student, as well as an admirable, self-taught musician and singer. Griffin won the La Porte singing competition, “Hoosier Star,” winning not only the votes but also the hearts of many people in the audience. Anyone from Indiana can participate, and the top five are chosen to compete. In 2018, Griffin achieved first place in the Kids Division with the hit song, “Come Sail Away” by the Styx.

Griffin is also very dedicated to his studies and values his education. He has won Highest Academic Achiever all through elementary and middle school. Griffin is additionally on the Honor Roll and is fond of his time so far at Westville Schools.

“The friends you meet along the way are the most important thing,” said Griffin.

On top of being a great student, he also enjoys expressing his creativity through art and various other activities. He has landed the leading roles in all of the four school musicals he has participated in. These performances include “Willy Wonka and the Chocolate Factory”, “James and the Giant Peach”, “The Cat in the Hat”, and this year’s production of “Beauty and the Beast”. Griffin is also a member of multiple clubs, such as Theater, Science Olympiad, National Honor Society, Spanish Club, and the kindness club, otherwise known as POWW.

Navigating through high school may be challenging sometimes, but Griffin likes to have fun by playing board and video games. He also loves watching movies, his favorite being Star Wars and anything Marvel.

“No matter what life throws at you, you have to keep pushing through,” said Griffin.

He hopes to one day become a successful musician or teacher. Due to his remarkable talent and seemingly endless passion, Griffin has a bright and promising future ahead of him.