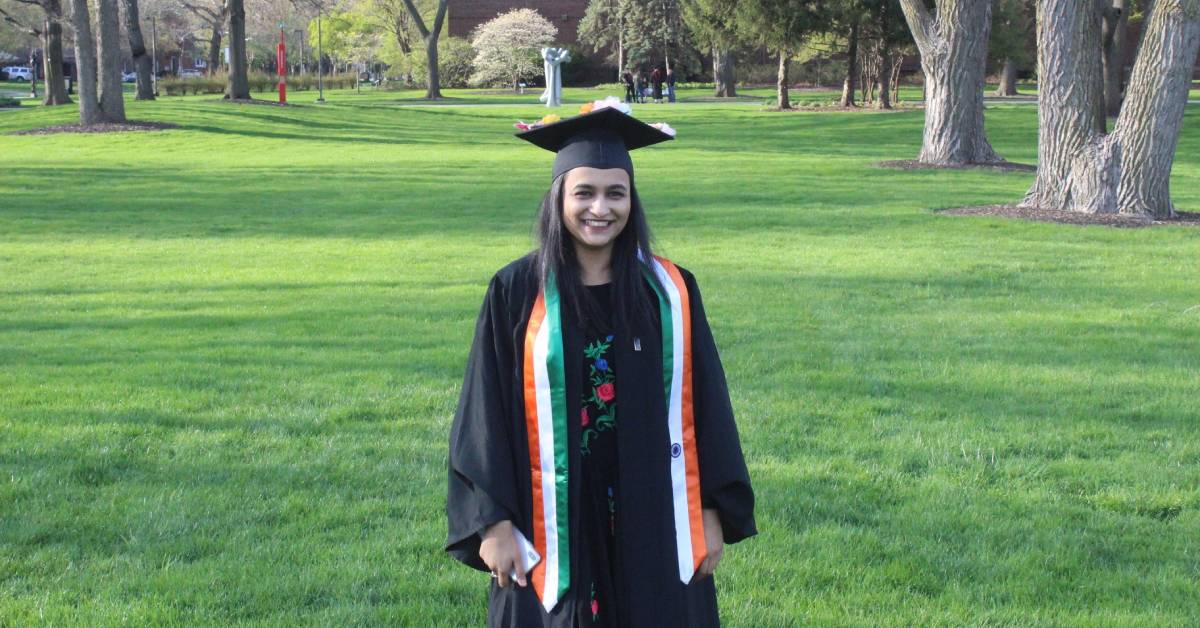 While graduation season looked different for everyone this year, students such as Ruhani Sharma are approaching the future with excitement. Having just graduated from Purdue University Northwest (PNW) this spring, Sharma is already looking ahead to a world of opportunity made possible by her education, her family’s faith in her, and her tenacity.

Sharma has a long list of credentials to accompany her marketing and business analytics degree, including but not limited to College of Business Student Senator and Ambassador, Student Government Association member, and president of the Purdue Northwest Indian Student Association. While all of these accomplishments enhanced her time at PNW and make her well suited to a variety of future leadership roles, Sharma never once took for granted the amount of hard work it takes to earn such titles.

“Being 23 and looking at what is going on around us at the moment, it is very hard to say what the perfect job is right now after graduation, but it does not make me give up on my dreams,” Sharma said. “Having immigrant parents who worked hard all their lives to give my brother and me the best life they possibly could [motivates me].”

Sharma and her family moved to the United States from India in 2011, starting in Indiana before moving to California soon after. She finished high school in California and decided to pursue her degree at an in-state university, but a job-related move during her first year of college brought her family back to Indiana in 2016. Sharma took a year to focus on what she wanted to pursue.

She joined PNW in 2017 after completing a marketing internship in India earlier that year.

“That is when I decided to pursue the business path, but still wasn’t exactly sure what I wanted to do in the business world. A year later, after meeting with several advisors, faculty, and staff, I decided to pursue my degree in marketing and business analytics,” she said. “I have always dreamed of being a part of a large firm or having my own company one day, and the idea of a corporate lifestyle always fascinated me.”

Her personal experiences and interests also led her to consider this pathway.

“Marketing is very diverse and creative as it includes many different things and gives you the opportunity to connect with people from many different backgrounds. In the digital world we live in today, marketing and business analytics play a major role together and are growing quickly,” Sharma said. “I plan to have my own startup in a few years after I analyze the market. As a personal goal, I want to continue volunteering and keep giving back to the community by helping in any way possible.”

Sharma’s investment in getting connected with her community informed her extracurriculars and achievements at PNW.

“Being a member of the Student Government Association and representing the College of Business as a senator and a student ambassador have been a very rewarding experiences. Both positions have helped me gain more leadership as well as organizational skills,” she said. “I also got the opportunity to work closely with the College of Business dean and faculty members to find ways to help the student population. This has helped me build connections both within the PNW community and outside of it as well.”

In recognition of her influential voice and status as a female leader on campus, Sharma was nominated to join the PNW Women’s Leadership Luncheon each of the past two years. As the president of the Purdue Northwest Indian Student Association, she successfully organized many events for students. One of her most notable accomplishments, she said, is the PISA - Diwali event she spearheaded in 2019.

Sharma is also a volunteer for the Rotary International Club in Schererville, and was the only recipient of the 2019 Summer Study Abroad Scholarship. She represented the chapter as a Rotary ambassador in London last summer.

“I can say that, after studying abroad, I would highly recommend it to anyone and everyone who has the opportunity to do so. This made me realize that cultural awareness is very difficult for Americans. In the United States, I think it’s safe to say that we live in a very ethnocentric bubble where we believe that our way is the only way and that by default, everything else is weird. Going to class every day and interacting with people from different parts of the world and building long-lasting friendships was truly irreplaceable,” she said.

“Additionally, there was also just the freedom of traveling in Europe as a young adult,” she said. “It's a new level of responsibility and freedom that you don’t really get to experience back home in the States.”

Sharma is in the process of starting a Rotaract Club for the town of Schererville to get more youth involved in the organization.

When Sharma thinks back to her favorite PNW memories, she fondly remembers how new students were welcomed into the mix--a strong reminder of the school’s festivity and inclusivity.

“Every year, PNW hosts a welcome week which typically has food, games, music, giveaways. It is a great way to kick off the school year and showcase all the resources PNW has to offer. All students get the opportunity to interact with members of different clubs, organizations, and colleges, and get to learn more about them. PNW is a great university as it keeps everyone involved throughout the year,” Sharma said.

Involvement is the takeaway in Sharma’s biggest piece of advice to future college students.

“Make connections and build relationships, whether it is with peers or your professors,” she said. “Also, get involved on your campus because there are so many opportunities waiting to be taken.”

And if they’re lucky, students will receive their education at institutions as meaningful to them as PNW is to Sharma.

“PNW has a lot to offer. It is not only a four-year university, but home to people from all across the world,” she said. “My experience at PNW has been very special, as there has always been somebody there to help me and guide me in the right direction. There are tons of resources for students with any circumstance, and I think that is what makes PNW a special place as it is a very personalized experience.”

“During the past four years at Purdue Northwest, I had many challenges; but I had the absolute best college experience and made lifetime memories,” Sharma said.

Join us in wishing Ruhani Sharma congratulations on her commencement! To learn more about Purdue University Northwest, visit https://www.pnw.edu/.