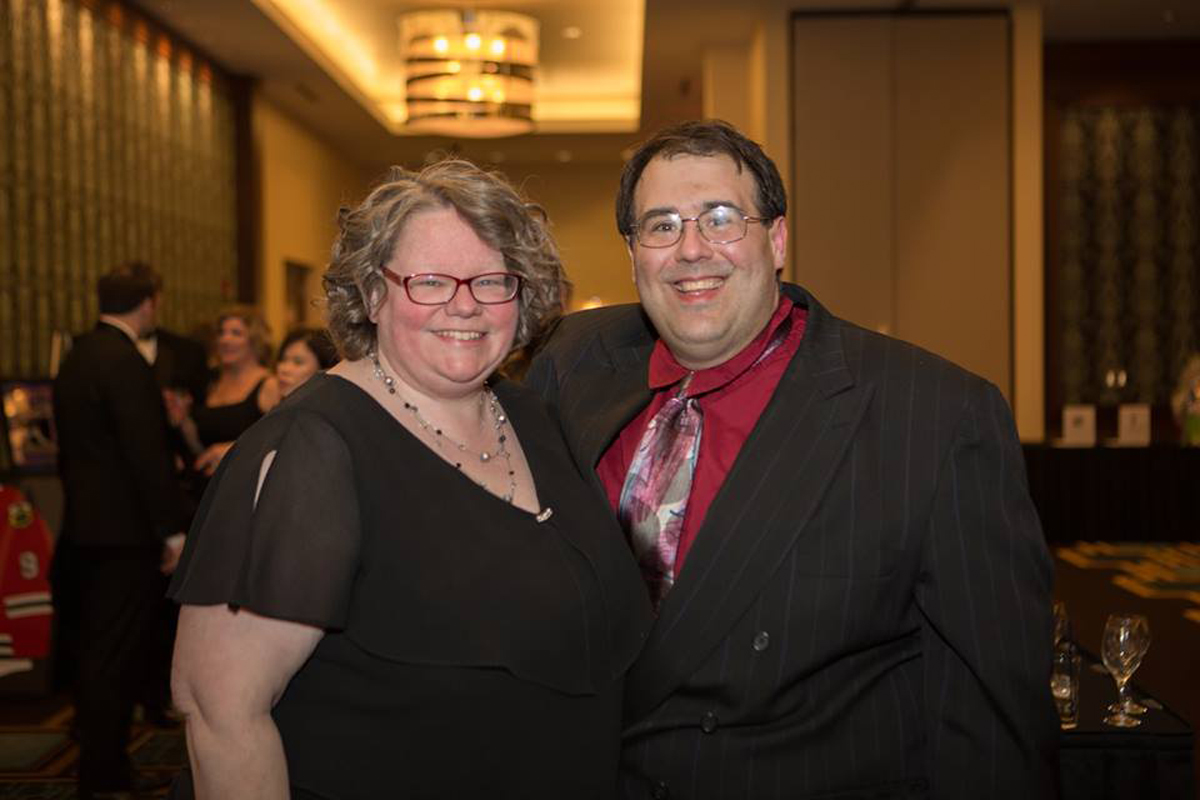 “We get to do it together, so it works!”

Becky Jascoviak was describing her relationship with her husband, who she met while she was directing Willy Wonka and he was starring as the title character, and how their mutual passion for theater has assuaged her previous concern that getting married might mean an end to her involvement in the art form.

But it could easily be Becky’s personal maxim.

By day, Becky secures grant money for Opportunity Enterprises. By night and weekend and every moment of spare time, she contributes to the thriving theater community in the Region.

“I love bringing people together, exchanging creative ideas and visions, and putting it all together for a night of entertainment, education, or just a new way of thinking about something.”

Becky is in her 7th year as president of the Northwest Indiana Excellence in Theater Foundation and has worked in productions from Hammond to Valpo and all throughout the Region. As noted, it’s how she met her husband.

Becky’s passion for theater has come a long way. In high school, she was involved in every type of band on offer: concert, pep, marching, all the bands. Her intention was to pursue music in college, but she was devastated when that didn’t pan out.

Her passion for creative collaboration led her to the theater department, though, where she first dipped her toe into the scene. After college, she moved back to Northwest Indiana to find that most of her friends had moved away. In an effort to find new friends, she began her involvement in what she found to be a rich theater community here at home.

The Chicago Street Theater was doing a production of A Flea in Her Ear, and thus began history.

“I had just seen the show a couple of years before. It’s a hysterical farce,” Becky said. “I knew I just had to be involved, and I didn’t care how.”

She was cast and asked to be the stage manager, which brought her deeper into the community. Shortly thereafter, she would have her directorial debut with the Hammond Community Theater’s production of Little Women.

Quite like the balancing act of theater, Becky loves her job as the Marketing Communications Specialist at Opportunity Enterprises. There she does graphic design, writes letters and appeals, manages the website, and does grant writing.

“Every day is different,” Becky said. “I get to balance the business side with the social work side, but I also get to address the challenge of how we acquire the funds to do what we do here.”

As the President of the Grant Professionals Foundation, Becky likes the extreme focus of grant writing.

“It’s exactly the same skill set as marketing, but for an audience of one,” Becky said. “You’re telling a story and crafting a message in a way that makes a person want to respond.”

Becky’s work at Opportunity Enterprises meshes well with her passion for theater.

“I am passionate about connecting people and resources,” Becky said, “and both of these give me the opportunity to connect with people whose paths I’d never otherwise cross.”

Becky and her husband are gearing up to co-direct the Northwest Indiana premier of Stephen Schwartz musical Shapshots for the Genesius Guild in Hammond in March.

“It’s a new musical that takes all the old music from his other plays like Godspell and Pippen and Wicked and reworks it into a completely new show with its own storyline,” Becky said. “It’s music that everyone will recognize set to a new story they’ve never seen.”

For more information on Becky’s next passion project, visit http://nietf.org/show/snapshots-a-musical-scrapbook/ or her Twitter @NonProfitBecky.