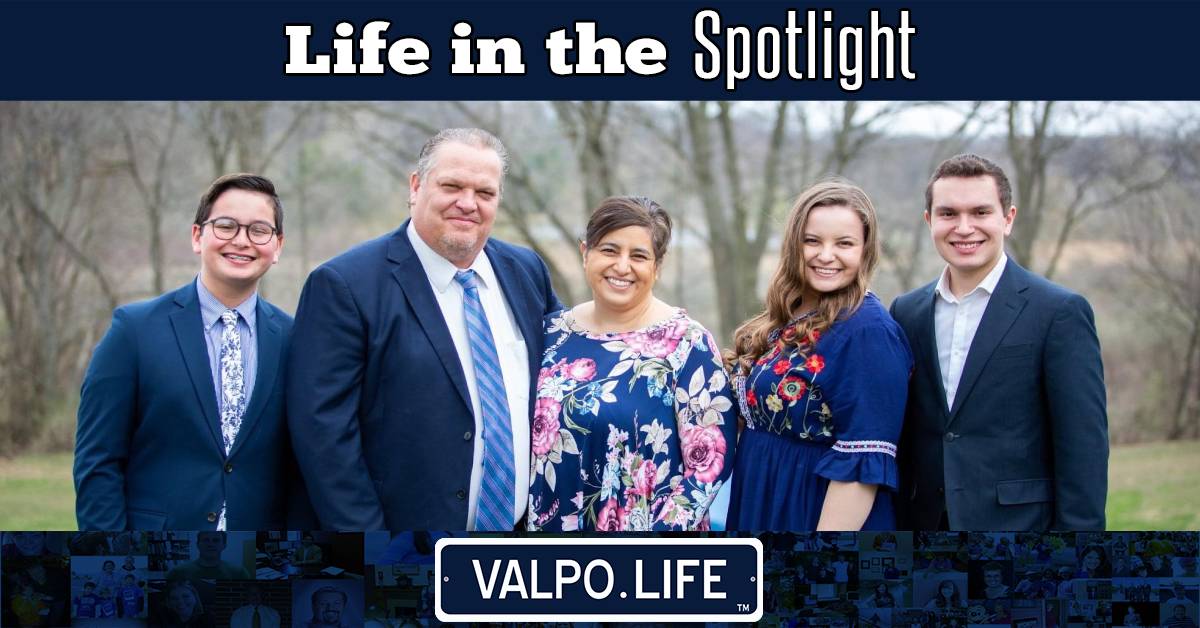 When Maggie and Troy Quick purchased their Morgan Township home in 2008, they were immediately struck by the unique, valley-like formation in their backyard.

“When we moved here, they told us the previous owners referred to their backyard as a bowl, because it’s kind of a hill on a round,” Maggie Quick said. “It’s unusual for Porter County.”

The property was owned by the Hanna family for three generations, and they were the ones who affectionately called the 18 acres “the Bowl.” When Faye Hanna (1911-1986) lived at the property, she would walk the Bowl daily, praying in solitude. In her prayers, she found herself dedicating the Bowl to God, asking him to instill with purpose. She had a vision of the Bowl filled with voices devoting praise to the Lord.

Some 108 years later, Troy, a minister for Portage United Pentecostal Church, found himself wandering the same pathways, both physically and in thought. Whether cutting the grass or just walking across the property, Troy would spend his personal prayer time in the Bowl. An idea kept playing in his mind. One day, in 2016, he and Maggie were standing in the backyard looking out over the Bowl.

“Wouldn’t it be nice to have some kind of concert out here?” Troy asked Maggie. “A Gospel concert.”

A passionate singer in her church choir, the idea of a concert devoted to Gospel music appealed to Maggie, too. Plus, the Bowl seemed just the perfect setting for such an outdoor concert. More than anything, the pair were moved by their strong inclination to arrange the concert, an inclination that Troy felt he arrived at through prayer.

“It was something I think just came through in prayer,” Maggie said. “God laid it in our hearts.”

When she mentioned the idea to her friend, whose father is the son of Faye Hanna, her friend told her about Faye’s vision. The Quicks knew then that the concert was part of a larger plan.

“We felt very strongly that it was her prayers continuing on in my husband’s prayers,” Maggie said.

And so, in 2018, the Quick family hosted the inaugural Gospel Bowl. Although the Quicks had their share of doubts and stresses leading up to the concert, the plan was already in action in a big way. Through word of mouth, social media, and a network of Christian neighbors spanning across the Region, the Gospel Bowl quickly grew into the kind of event that necessitates becoming tradition.

“We thought, if this is God’s will, we don’t need money for this. We’re going to have a zero-dollar budget, and we’re just going to see what happens,” Maggie said. “And it worked.”

One by one, local musicians began reaching out to the Quicks or through the Gospel Bowl Facebook page they created. Additionally, friends with connections and interested businesses clamored to equip Gospel Bowl with everything it needed to be a successful outdoor concert series. Seismic Sound donated all the sound equipment for the event, and Crown of Life Church donated the stage. Birky Family Farms offered to host a concession stand selling hot dogs and burgers.

“At the end of the day we went to ask him [owner Chris Birky] what we owed him, and he wouldn’t take one dollar,” Maggie said.

An anonymous donor procured portable bathrooms for the event, an act which Maggie said was especially a blessing because, as anyone who’s rented them knows, porta-potties are not inexpensive. To top it off, LGS Plumbing, Inc. donated their ad airtime on SHINE.FM 89.7 so that Gospel Bowl could have an official advertisement. When the concert took place in September, Gospel Bowl welcomed more than 500 attendees. The City of Valparaiso gave the Quick family variance to host Gospel Bowl in their backyard for two more years; the local county board gave unanimous approval.

“When the Bible talks about God multiplying your efforts, this is it in true form,” Maggie said.

In 2019, Gospel Bowl saw more than 700 attendees, and additional food sponsors like Chick-fil-a and Da Portable Rican food truck joined the charge. Loaned golf carts were available to elderly and injured concert goers to make their way from their parking spot. Group 7even and Cardinal Point Technologies were Gospel Bowl’s first corporate sponsors. As for the local musicians, countless groups of talent have graced the Gospel Bowl stage, including Voices of Love from Gary, Indiana Bible College Chosen, His Echo, Heartland Christian Center of Valparaiso’s choir, Calvary Row, and many more. Maggie herself has even taken the stage.

“The bands give it everything they’ve got, rain or shine,” said Gospel Bowl attendee Sandi Phillips, a leader at Faith Church in Cedar Lake. “I’d really love to hear Maggie Quick onstage again. I didn’t realize she had such a great voice! She rocks that stage when she’s up there.”

The 2020 Gospel Bowl is projected to take place on September 19.

“We’re very thankful for Morgan Township for supporting us and helping us get the word around,” Maggie said. “We know that God has something big planned through this, and we hope we can continue to grow this concert for years to come.”

As a gathering aimed to give Christians a chance to come together, worship, relax, and revel in an outdoor setting, nothing more or less, the concert is sure to become a long lasting tradition.

“Initial impression was excited at how it included everyone,” said Amy Atchison, who attended Gospel Bowl both years. “It didn’t matter what denomination you came from, everyone was welcome. There’s no agenda, you’re not expected to buy anything. It’s a very relaxed atmosphere, and a unique one.”

“It’s family-oriented. Kids are welcome with lots of space to run around,” Phillips added. “And there’s such a variety of talent with the musical bands. But it’s not just the music, it’s the opportunities to get to know each other and meet other Christians. And the food that they provide is wonderful! It’s a great place to be, and a good afternoon to enjoy Gospel music.”

“It’s not fancy, right? We’ve learned that it’s not about our efforts, it’s about God and what he wants to happen,” Maggie said. “No one’s asking you to sign up for anything at the end of this. If you want to donate, there’s a hospitality tent and you’re welcome to donate. But nothing is expected.”

“Gospel Bowl is just a way to bring the community together,” Troy agreed. “It’s not about pushing religion or specific denominations, it’s just a way to come together, praise the Lord, and have that liberty and freedom to worship together.”

The Quicks are just happy to see so many Christian neighbors come together in one setting, and to be able to offer that setting. It’s been especially meaningful to see their three teenage children grow during Gospel Bowl.

“It’s been a family affair for us, and it’s been great to see my kids involved. It’s one thing to read the stories in the Bible together, but then for them to see God multiplying efforts in action, that’s really something,” Maggie said.

Seeing the effect a non-traditional setting can have on people’s relationship with their faith is another draw of Gospel Bowl.

“You know, some people aren’t comfortable going to church. Or maybe they don’t have someone to go to in prayer, or don’t know how to pray. Seeing people go up to my husband during Gospel Bowl and having him pray with them, it’s really special,” Maggie said.

“When you come to Gospel Bowl, you can feel it,” she said. “You can just feel this unity of Christians coming together, putting the barriers of religion aside, and just praising and worshipping God together.”

The Quicks offer home Bible studies and prayer groups, too.

“I want people to know there’s a place here if they want to get to know the Lord better, and that’s not just on Gospel Bowl day,” Maggie said. “Our door is always open.”

The Quicks take pride and joy in their faith, and it’s a purpose they want to share.

“We keep it pretty simple when it comes to our lifestyle,” Maggie said, laughing. “I’ve been singing since I was little, I love singing in the church and being a mom. Those are the highlights of my life, along with being involved in church.”

“I enjoy my carpentry, I love doing woodwork, I’m a big Bears fan, a big Cubs fan,” Troy chuckled. “I love to spend time with my family, I love to raise my kids.”

The Quicks are earnest and modest, but what their friends have to say speaks volumes.

“They are real, and they are down to Earth. They love God and Jesus, and they are true to who they say they are,” Atchison said. “They’re always reaching out into the community, always lending a helping hand. Anyone would be lucky to have them as friends. Anyone.”

Maggie and Troy Quick are steadfast in their purpose, and Gospel Bowl is a reflection of that.

“We would like it to go deeper. Each year, we’re hoping God opens up the door to us to reach more people,” Maggie said. “However he wants us to be used in this community, we’re here for it.”
To learn more about Gospel Bowl, to become involved either as a musical act or a sponsor, or to simply reach out to Maggie and Troy, visit https://www.facebook.com/GospelBowl/.