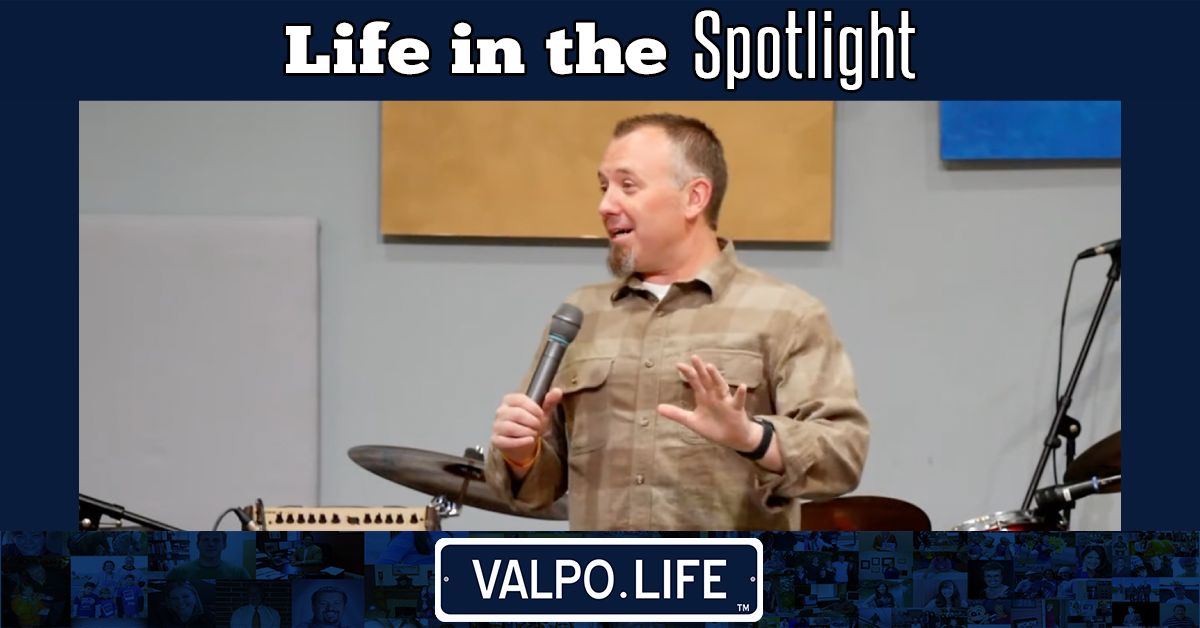 Serving as a pastor at Living Hope Community Church in Valparaiso, Rich Schmidt has been preaching in the Region for over 20 years.

As he spent his boyhood between Kansas, North Dakota, and central Illinois, Schmidt’s journey of faith began with his family, seeing his father work as a pastor all of his life. The idea of becoming a pastor himself could not be said to have been on his radar from an early age, however.

Instead, Schmidt’s epiphanic moment arrived on his doorstep while he was in college. For him, it was not this big, showy calling, like a burning bush, but rather one that reflected the humility of God described in the Bible. It came as a meek tap on his shoulder, one that would change his life forever.

“When I was younger, people used to ask me, ‘Are you going to be a pastor like your dad?’ and I would always just say, ‘I’ll do whatever God wants me to do.’ So when I was attending Olivet Nazarene University, numerous things had been adding up to my eventual calling, but I did have a specific moment. I played on the soccer team over there, and one night a friend of mine had invited me to this nightly prayer gathering at a small little chapel in the corner of campus. Every night, we would gather there, small groups of us, and just pray, pace the aisles, play the piano and sing. On that particular night, I happened to be sitting in one of the pews, reading Scripture and praying. It was a few days after I had gone to church the past Sunday, and I was talking with God about the pastor who had been preaching and about the service in general. Then I felt God say to me, ‘That's what I want you to do.’ So that was my moment, the moment in which I felt God called to me, but it took quite a bit of conversation with other people in my process of discernment, in the process of truly figuring out if it really was something God wanted me to do,” Schmidt said.

Thereafter Schmidt went on to change his major in order to move in this new direction he was now being led. Upon graduating college, he attended Nazarene Theological Seminary, which is where he earned his Master of Divinity degree.

It has not taken a lot of time for Schmidt to realize his favorite parts about his vocation. There’s so much that he does, so figuring out what makes it worthwhile is definitely tricky at times. In that way, though, once he gets to reflect on it all, he has an easy time understanding how blessed both he and the church are.

“It's simply being able to help people, my favorite part. I enjoy helping people connect the truth of God's Words, the truth of Scripture, to whatever might be going on in their daily lives. It’s important for me to help people realize that God has something to say to them today, every day. When I teach and preach, I’m not just relaying information found in a dusty book about things that happened a long time ago,” he said. “Making connections between people’s lives and what’s written allows room for realizations of any kind to flourish, and that’s what my job is all about.”

Since he’s been one of this devout lifestyle for a while, Schmidt’s had no hard time understanding his purpose. Nowadays, having been established as a reverend for years now, most of Schmidt’s attention is given to the church he operates on a daily basis, of course. As a leader, he has realized his truest intentions for the community.

“Most of my life has been spent trying to keep up with Jesus as he is at work in the world, trying to stay connected to the Christian faith. At the most basic level, as a pastor trying to help people, the way we describe it at Living Hope is that we're helping people connect with God, with each other, and with a world that needs God's love. Fortunately for me, I get to spend a majority of my time out in the community. For example, we've been very active over the years in helping our homeless neighbors — whether that's providing shelter for families, hosting them in our church, or volunteering with and supporting other organizations. For the last three years, we've been involved with Habitat for Humanity in Porter County, helping to build houses. Then there’s our support of World Vision, which leads into providing clean water for people around the world; I've even run the Chicago Marathon with World Vision four times now. Doing those things and helping people in our church be involved in the community is something that means a lot to me,” Schmidt said.

Away from the operations of the office he holds, Schmidt passes his time with an array of different things. He values all the time he gets with his wife, Stacey. The two of them enjoy walks through downtown Valpo and dining in the local restaurants about the area.

Along with all of that, Schmidt is the father of twin boys, David and Jonathan, both of whom are turning seven in January. Because of how active they are, much of Schmidt’s time is spent trying to keep up with them.

Nevertheless, whether it be spent behind the pulpit or with his family, Schmidt’s able to paint a full picture out of all of his experiences, and they permit him to bring inspired truths to his congregation week after week.