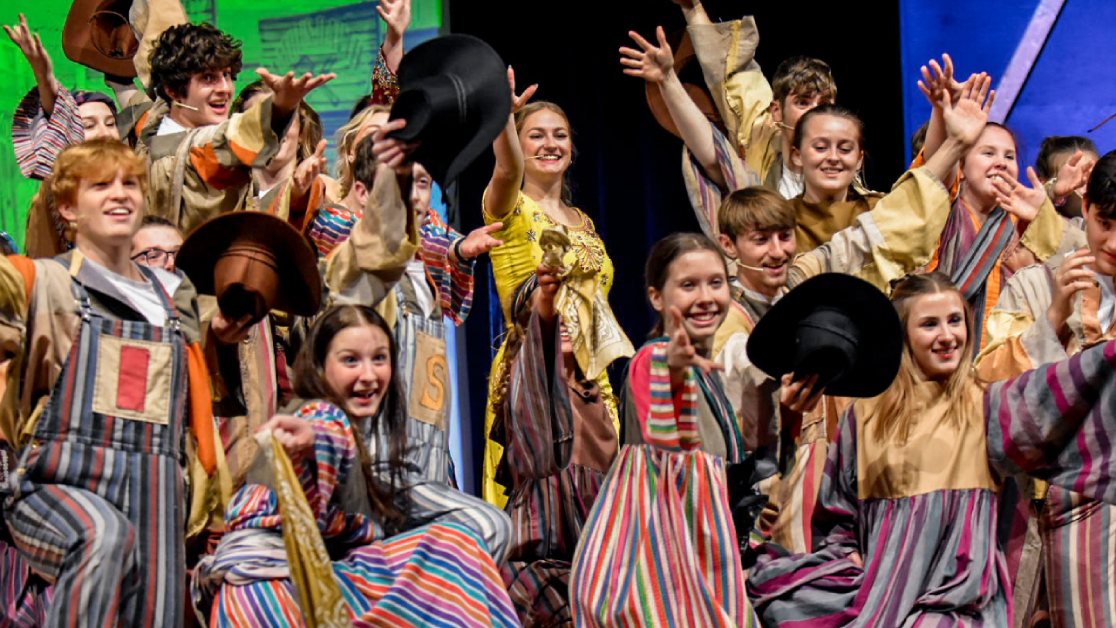 Chesterton High School’s auditorium has become a whimsical array of colors accommodated by song for its fall production of ‘Joseph and the Amazing Technicolor Dreamcoat.’

The musical, which kicks off its first show this Thursday, follows the story of Joseph from the “Book of Genesis.” When Joseph is gifted a multicolored coat by his father, Jacob, as a token of praise and appreciation, he quickly becomes the object of jealousy amongst his 11 other brothers, and is then launched into a journey of hardships only meant to be endured and triumphed by a dreamer no other than Joseph himself.

The decision to bring this show to Chesterton’s stage was quite an easy one to make for Director Kristin Morris. When looking at musicals to perform for the upcoming season, Morris knew right away that "Joseph" would be the perfect fit for the fall production.

“Whenever I’m picking a show I always think about the kids that I have and what things would suit them best so I can make sure we can highlight all the strengths of the kids. This show has actually been at the top of the list for shows to do.”

Landing the lead role has been a dream come true for Ian Condes. He’s enjoyed the process to bring Joseph to life on stage and considers this one of his favorite productions he’s been in to date.

“I’ve been doing theatre since I was a sophomore and I think the thing I love most about this production is the amount of singing and dancing we have.”

As the title indicates, designing “Joseph” for the Chesterton stage has been an amazing process for the entire cast and crew. The group has grown extremely close over the weeks as they’ve worked together through long hours of rehearsals to memorize lines, learn choreography, and create a show sure to wow the Chesterton community. As the curtain call for opening night draws near, the entire group now easily considers each other like a second family.

“My favorite part is I’ve never been a lead in a musical before so it’s an entirely new experience and it’s my senior year so it’s nice to end it with a bang,”  said Cadence Orange, the senior portraying a Narrator.

While the show is being performed at the high school, the cast consists of students all across the Duneland School System. A total of 50 high school students have been cast in the show, and those students will be joined on stage with a children’s choir, consisting of over 60 students in grades one through eight as well.

The cast and crew strongly encourages everyone to come out and catch this classic musical. With a timeless story paired with a variety of musical genres such as country-western, calypso, bubblegum pop, and rock and roll, this is sure to be a magical, colorful event for everyone to enjoy.

“People need to come see this play because it’s gonna be a great time with a lot of funny moments. It's gonna be awesome to see the whole thing turn out,”  said Karleigh Pawlyszyn, the freshman portraying a Narrator.

“Joseph and the Amazing Technicolor Dreamcoat” will be running at Chesterton High School from Thursday, November 17 to Saturday, November 19. Performances will be held at 7 p.m. all three days, as well as an additional performance Saturday at 3 p.m. Tickets are $10 for adults, $8 for students and seniors, and $5 for elementary students. Visit the website here for more information.