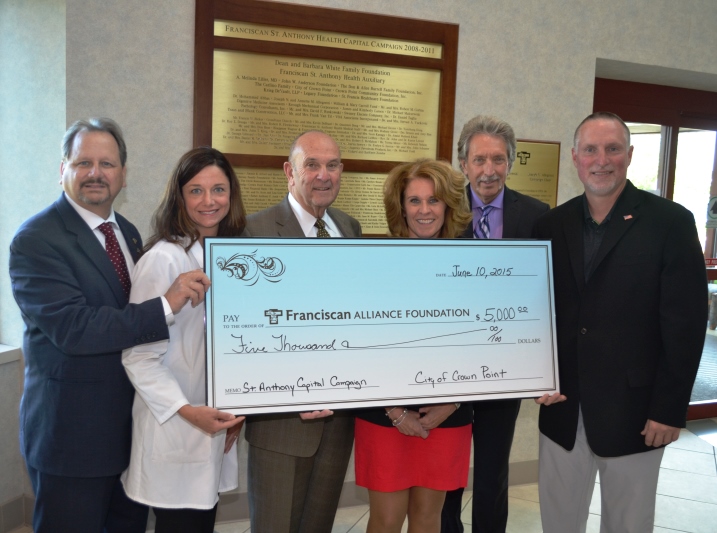 Crown Point Mayor David Uran, far right, on June 10 presents to Franciscan St. Anthony Health-Crown Point representatives the last of five, $5,000 installments the city has made annually to benefit the hospital’s Capital Campaign, which raised funds for the building of a new St. Clare Health Clinic at 1121 S. Indiana Ave. and a Neonatal Intensive Care Unit at the hospital, 1201 S. Main St. The campaign received $4.2 million in pledges during a more than two-year period from various community sources, benefactors and fund-raising efforts.

The clinic provides free primary health care, a prenatal assistance program and other referral services for underprivileged area residents. Uran said the City Council approved the appropriation to the Franciscan Alliance Foundation, which oversees fund-raising efforts, “to continue the partnership we have with the hospital and the services it provides at St. Clare.” He added, “I have been glad from day one that we were involved. Five years later, this investment still makes all the sense in the world, based on the impact it has had for all who use these services.” Tony Englert, far left, foundation executive director, told the mayor how much the donation has been appreciated.

“This is a great gift that helps so many people and we are so grateful for it,” he added. Also shown, from left, are Julie Mallers, nurse practitioner-clinic manager; Joe Allegretti, Capital Campaign chairman, who was instrumental in securing the donation; Barbara Anderson, incoming hospital president; and David Ruskowski, outgoing hospital president. A wall plaque behind them salutes the campaign and those who donated.