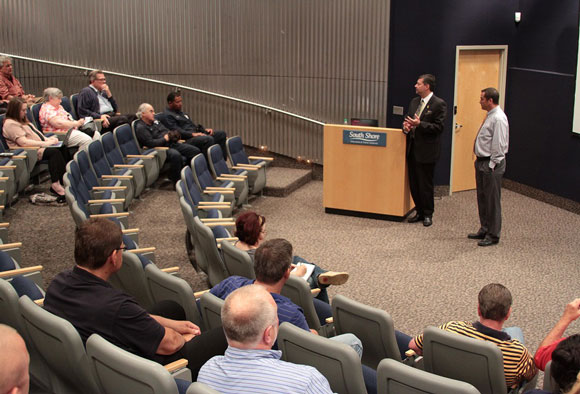 Organizations to work together on data collection

City of Hammond Mayor Thomas M. McDermott, Jr., and South Shore Convention and Visitors Authority President and CEO Speros A. Batistatos announced a new partnership between the City of Hammond and the South Shore CVA during a press conference Thursday morning. The two organizations will be working closely together to collect data on attendees of the annual Festival of the Lakes, a five-day festival at Wolf Lake Memorial Park in Hammond.

“This is the 10th annual Festival of the Lakes and the information we will be collecting will help us take this event to the next level,” stated Mayor McDermott.

The partnership will include both entities working to gather demographic information each night of the festival. According to Batistatos, this information will allow the City of Hammond to make better decisions regarding allocation of sponsorships, advertisement and how funds are spent on musical entertainment.

By completing surveys and capturing the emails of attendees, the City of Hammond and the South Shore CVA will be able to assist with hotel reservations, provide information on local restaurants and gather demographic information, information that is needed when approaching potential sponsors for the event. The collection of data will also help the City of Hammond decide which musical acts to seek-out, while understanding how money can more efficiently be spent.

“The demographics will show us the age groups we’re drawing and their incomes. We will know which acts are bringing the people who have money to spend, and are willing to spend it at these events and surrounding businesses,” said Batistatos.

“We already know we’re reaching Wisconsin, Illinois, Indiana and Ohio, but we want to know about those who are coming from Nebraska. Why did they come to Festival of the Lakes? That’s some of the information we will be looking to acquire,” said Mayor McDermott.