When it comes to selling the highest quality of compressed air systems, CompressAir is the company of choice. When it comes to providing excellent service to their customers, CompressAir goes above and beyond. The sales representatives strive to help their customers reduce energy costs and increase efficiency in all aspects of their compressed air systems. In many cases, CompressAir reps can secure energy rebates for clients, saving them costs they never imagined could be saved.

In one such instance, a customer had turned to CompressAir for assistance with a better compressed air setup. It was June of 2017, and the company in question switched out their old Joy unit for a 20 horsepower Kaeser compressor from another plant. With the Kaeser’s SK26 inlet modulation control with a dryer and filter dating to an unknown year, CompressAir suggested performing an air audit to ensure that the system was performing at top efficiency and conserving as much energy as possible for the company.

A supply side audit was performed over the course of a week in August of 2017. The amps and outlet pressure of each machine in the facility was measured every 15 seconds using CompressAir’s LogAir data loggers. More than 240,030 data points were stored, which were then used to calculate the power, pressure, and flows for the audit data.

The audit findings showed that the system was running 62 horsepower (HP) on average, nearing the full 70 HP system capacity. Other reports showed one of the systems demonstrating issues that prevented the machine to load up to full 25 HP capacity, running only around a maximum of 20 HP. This issue was later diagnosed as a control issue by CompressAir technicians and then repaired.

The system on average ran at 100 pounds per square inch (PSI), but the audit illustrated drops in pressure as low as 55 PSI. To make matters worse, the system had no redundancy, meaning if one unit went down, the entire plant could be in jeopardy. Production could be lost, and the unit was in danger of shutdown until the unit was repaired or a rental was supplied.

Using these findings, CompressAir compared the current system to a Sullair 5509PSB 75 HP compressor with spiral valve technology. The projected energy savings for the upgrade were $9,831 annually. Therefore, the project was eligible for a $9,831 rebate through NIPSCO’s custom incentive program. With the installation of this new compressor, system capacity would be increased to 354 cubic foot per minute (CFM) on just one compressor versus the current system’s 279 CFM which requires three machines to produce.

Not to mention, having a plant run on one machine instead of three reduces maintenance costs, and the current machines could be retired as back-up units, giving the customer a redundant system. The back-up machines could be used instead of a rental if the new main compressor needs repairs or maintenance, saving on rental costs, as well.

Naturally, the plant pursued this new compressor project, and it was approved by in April of 2018. The compressor only cost $29,545, and the rebate for the new compressor of $9,831 put the simple payback on the machine itself under two years. The company will receive their rebate this November. 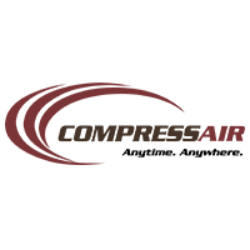