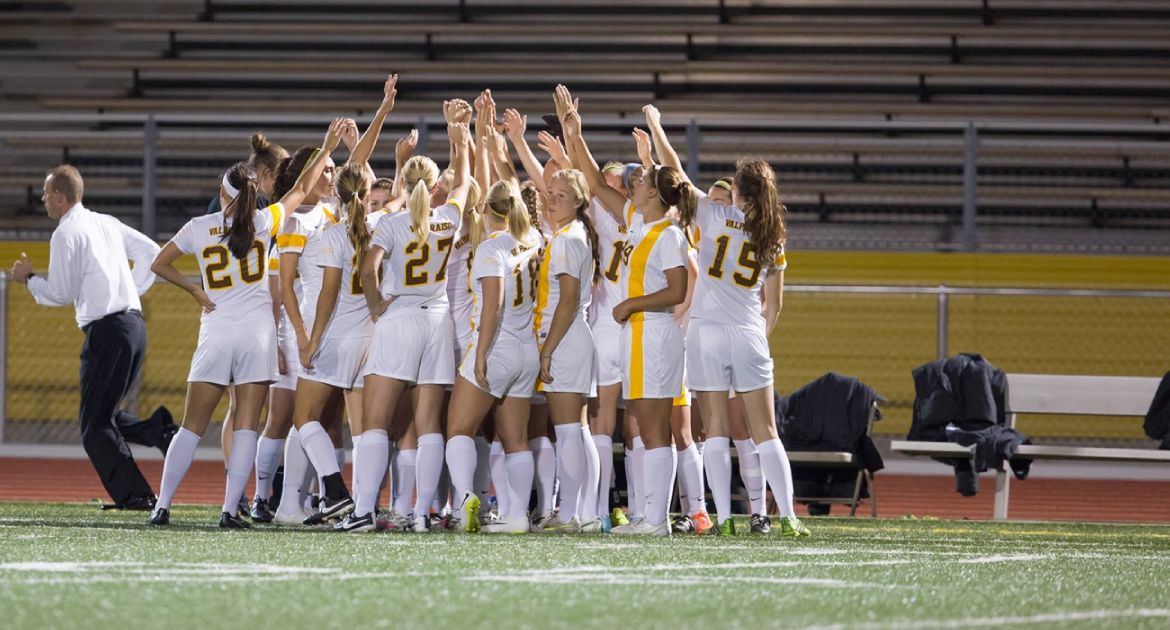 Games against Notre Dame and Northwestern, as well as a nine-game home slate at Brown Field, highlight the Valparaiso women’s soccer program’s 2015 schedule, as announced today by head coach John Marovich. The Crusaders enter 2015 coming off of the best season in program history (14-2-4) and looking to defend their Horizon League championship.

“We are excited to have put together an outstanding schedule for this fall which includes several nationally and regionally ranked opponents,” said Marovich. “We will be tested right out of the gate as we open up at Notre Dame, where we finished last season in the NCAA Tournament, and then at Northwestern. I am looking forward to the challenges that the 2015 schedule presents because each competition will give our players different systems and styles to compete against.”

Exhibition matches at Ohio and at home versus Central Michigan lead into the regular season opener, which sees the Crusaders travel back to the site of their NCAA Tournament trip last year to face off against Notre Dame. The game against the Fighting Irish, who advanced to the third round of the NCAA Tournament and ended the year ranked 11th nationally, is slated for a 6:30 p.m. CT kickoff on Friday, Aug. 21 and will be the first time Valparaiso and Notre Dame have met in regular season action.

The game against the Fighting Irish kicks off a five-match road trip to start the campaign. Two days after taking on Notre Dame, the Crusaders will head to Evanston Township H.S. to face Northwestern, which won nine matches last year out of the Big Ten. Then, on Aug. 28, Valpo plays at perennial MAC frontrunner Miami (Ohio), which went 14-3-2 last season and has won at least 10 matches in five of the last six years. Fixtures at Belmont (Sept. 4) and Western Kentucky (Sept. 6) close out the season-opening road swing.

The home slate for the Crusaders at Brown Field begins on Friday, Sept. 11 as Valpo hosts Eastern Washington at 7:30 p.m. The game against the Eagles is one of four non-league contests the Crusaders will host, joined by matches against Bowling Green (Sept. 13), Indiana State (Sept. 20) and former Horizon League foe Loyola (Oct. 11).

“The early-season road trips will test our ability to play away from the comforts of Brown Field and develop our mental toughness to compete in difficult venues across the country,” said Marovich. “Ultimately, this schedule will demand our players to be ready to play every minute of every match which will prepare us for the difficult Horizon League schedule.”