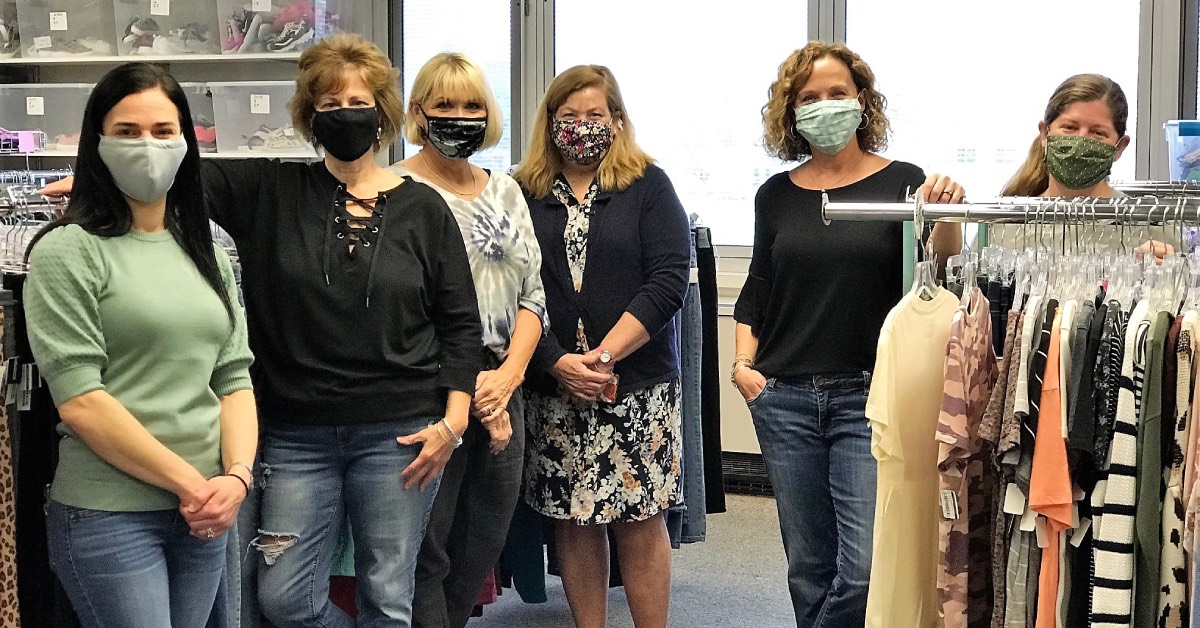 Racks of new clothing organized by color and sizes hung in two large rooms of Valparaiso Alternative Learning Experience (VALE) on Hayes Leonard Rd. On the back walls were bins of shoes organized by size. Manning these are the smiling faces of board members and volunteers from Dressed For School.

Today was Dressed For School’s spring open house and donation event. The program, started in 2019 by Julie Douglas and Lisa Hauser, provides new clothing in a supportive, store-like environment at no cost to elementary students in the community from low-income families or families in-crisis.

“We saw a need in the community and in the schools,” said Douglas.

Each child who comes in is free to shop for their own clothes and leaves with an entire week’s wardrobe that includes five tops, four bottoms, five pairs of socks, and five pairs of underwear.

“Every child is eligible to come twice a year,” said Hauser. “They come once in the fall and once in the spring. They also get a pair of gym shoes once a school year. That was a new addition in 2020.”

The program has nearly doubled in size since it started two years ago.

“We started off with one classroom but quickly outgrew that,” said Hauser. Dressed For School now boasts two large rooms located off Door 5 of the VALE building.”

With three separate fitting rooms for boys, three for girls, and additional temporary fitting rooms, Hauser looks forward to being able to resume the days when they had buses bring the children in.

Douglas and Hauser do not take full credit for the programs’ success, though.

“It’s the need and generosity of the community,” said Hauser.

“The schools also have been great in directing the families with needs to us,” said Douglas.

“I was not aware there was such a need before this,” said Vice-President Betsy Fouts. “It’s not just the Valpo school system that has a need, but the county as well.”

Dressed For School believes children can build self-esteem from selecting their own wardrobe and taking ownership of the clothing that they wear. They believe that, as a result, students will feel confident attending school and perform at a higher level.

“I had four boys, but being a girl I remember how exciting it was on picture day or the first day of school to have new clothes. You went in with such energy and vigor. We want all kids to have that opportunity,” said Fouts.

Fouts is always impressed by the children’s considerations of the upcoming seasons when they make their choices.

“The kids that come in are so smart. They really think through and make decisions, and I am always impressed how kind and polite they are,” said Fouts.

Fouts, who initially appears quiet and shy, grins ear-to-ear when she talks about her experiences with Dressed For School. Her eyes light up when reflecting on the children and the program.

"We are their personal shoppers,” said Fouts.

“They come in and say ‘I want pink. I want purple. I want sparkles!’” said Fouts.

A memorable moment for Fouts was when two little girls came in wanting clothes that looked like what their mother was wearing.

“The kids have no idea that cash is not exchanged,” said Fouts. “We had a mom come in that was in medical school who had three kids. She had tears in her eyes as she told us, ‘this is the first time I’ve ever got to take all three of my kids clothes shopping.’”

Allison and Jeff Quackenbush brought donations with their twin, eleven-year-old sons, Evan and Ryan. The twins save their allowance money to go shopping for Dressed For School. According to Allison, not only are her sons learning about helping others, they are also learning fiscal responsibility.

“You can also help us out on social media by going to Amazon and signing-up for Amazon Smile. By designating us as your charity, we get a percentage of whatever you buy. We also have an Amazon wish list that ships right here to the school,” said Hauser.

To learn more about Dressed For School and their upcoming drop-off opportunities, visit https://www.dressedforschool.org/.