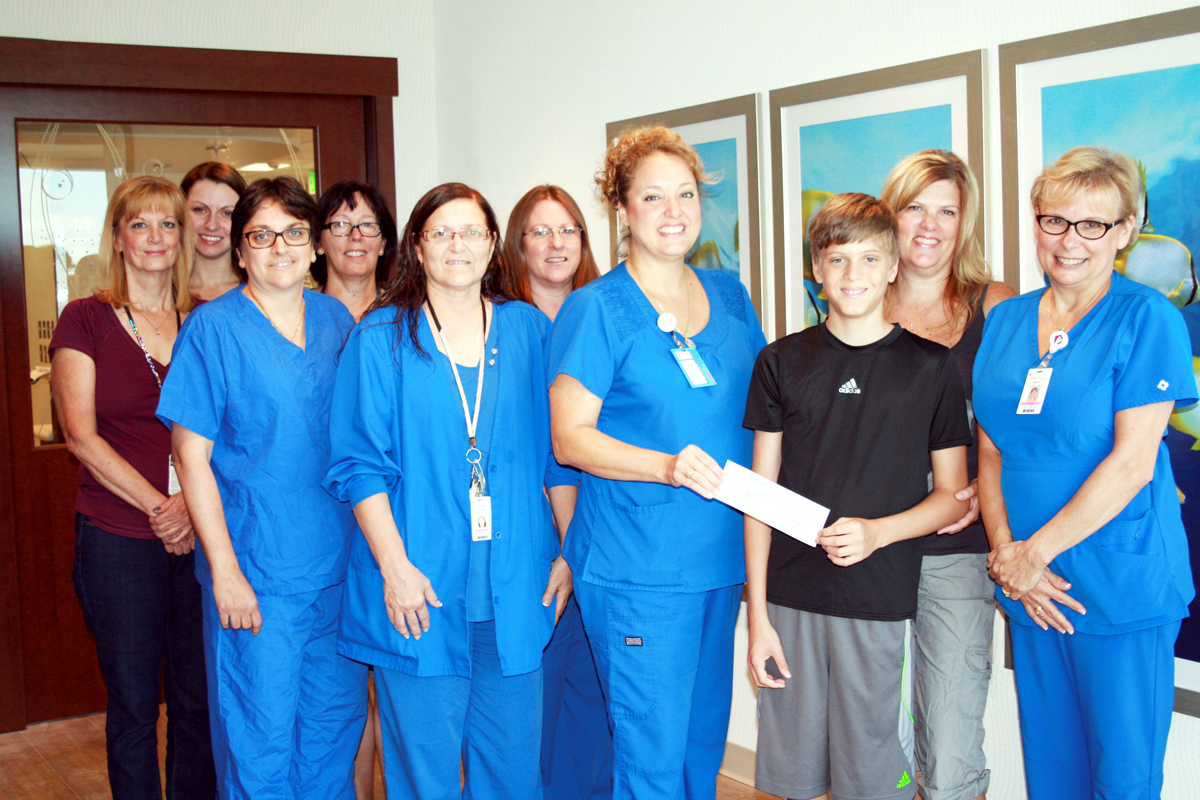 One of the tiniest patients born at Community Hospital in Munster is making a big impact in the community by raising awareness of sudden unexpected infant deaths (SUIDs). With the latest $3,000 donation from the Nathan C. Splant Foundation, nurse educators will be able to continue to provide HALO sleeper sacks to babies in the Neonatal Intensive Care unit (NICU) where Nathan was born. The sleeper sack, which is sent home with baby, helps to educate new parents about the safest way for their infant to sleep - always placing baby on their back…in a naked crib…all by themselves.

“Our family couldn’t have done it without the dedication and compassion of all those involved with Nathan’s recovery,” Nathan’s mom Kim Splant explains. “This is our way of giving back so others may benefit from our story.”

“We started with the ‘Put a HALO® on an Angel’ program raising awareness among employees and also provided education for our nurses,” said Michelle Cherry, RN, MSN, nurse manager, NICU, Community Hospital. “Now, safe sleep practices are taught in our newborn nurseries and the NICU, and also in the nurseries of sister hospitals St. Catherine Hospital and St. Mary Medical Center.”

The focus behind HALO’s Safer Way to Sleep® initiative is to keep delivered babies safe and warm while they sleep and to model safe sleep practices for parents. Used in the prevention of SIDS, a HALO® SleepSack™ is a soft, wearable blanket with a swaddle feature that replaces loose blankets in a crib. In recent years, the American Academy of Pediatrics has revised guidelines to suggest the use of wearable blankets instead of loose blankets as a way to help reduce the risk of SIDS in babies less than one year old.

SIDS is the sudden death of an infant under one year of age which remains unexplained after thorough investigation. In the United States, SIDS was the third leading cause of post-neonatal deaths in 2001 and the numbers continued to grow. By 2009 Lake County had recorded an alarmingly high number of Sudden Unexpected Infant Deaths (SUIDS) - second in the state - compared to the rest of the counties. The hospitals of Community Healthcare System lead Lake County in the annual number of infant births and the hospitals’ nursery staff was determined to take a leadership stance and turn these numbers around.

These practices are helping decrease the number of Sudden Infant Death Syndrome (SIDS) deaths and Sudden Unexpected Infant Deaths (SUID) that occur in the United States. Because of united efforts of more than 600 hospitals across the country, including the hospitals of Community Healthcare System, the sudden infant death rate is at an all-time low. Unfortunately, there still remain about 2,500 deaths per year in the United States and thousands more throughout the world.