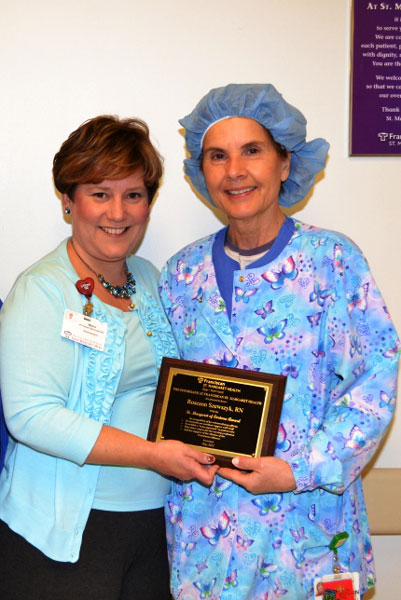 Roseann Szewczyk received the award during a program at the Dyer campus, while Cynthia Crosskurth was honored at the Hammond campus.

Szewczyk, who has been with Franciscan St. Margaret Health since 1994, runs the orthopedic unit. 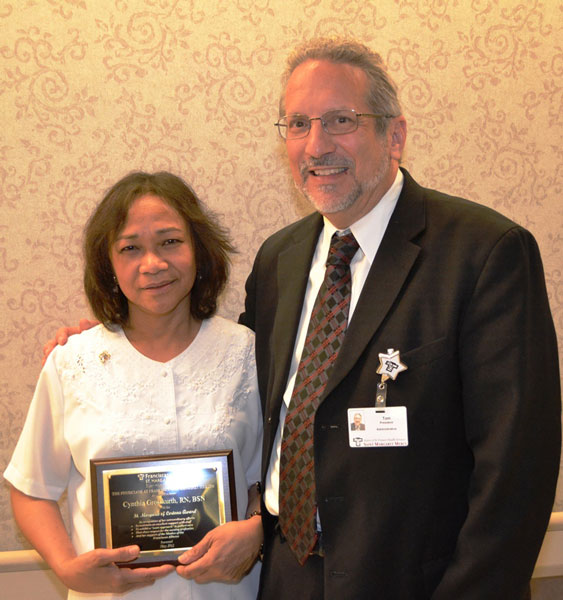 “She is a pleasure to work with,” said surgery manager Carole Perrin. “She is dedicated, energetic.” For this award, nurses nominate fellow nurses; the nurse with the most nominations is chosen.

Szewczyk said she was overwhelmed by the surprise ceremony. “I didn’t have a clue,” she said. “Everyone here is so deserving of this award.”

Crosskurth, who has been with Franciscan St. Margaret Health since 1979, said it was a honor to receive the recognition, adding, “I didn’t expect it; there are others more deserving. “

Kathy Thacker, manager of the intermediate critical care and cardiovascular unit, said Crosskurth was a unanimous choice among her peers.

“She is the first to jump in and help, wherever and whenever needed,” Thacker said.

Each winner received a plaque, cake, flowers and other gifts.

St. Margaret of Cortona joined the Third Order of St. Francis in the 1200s and chose to live in poverty, following the saint’s example. She founded a hospital for the homeless and impoverished in the city of Cortona, Italy and pledged her life to serving God through the hospital. She was canonized on May 16, 1728.