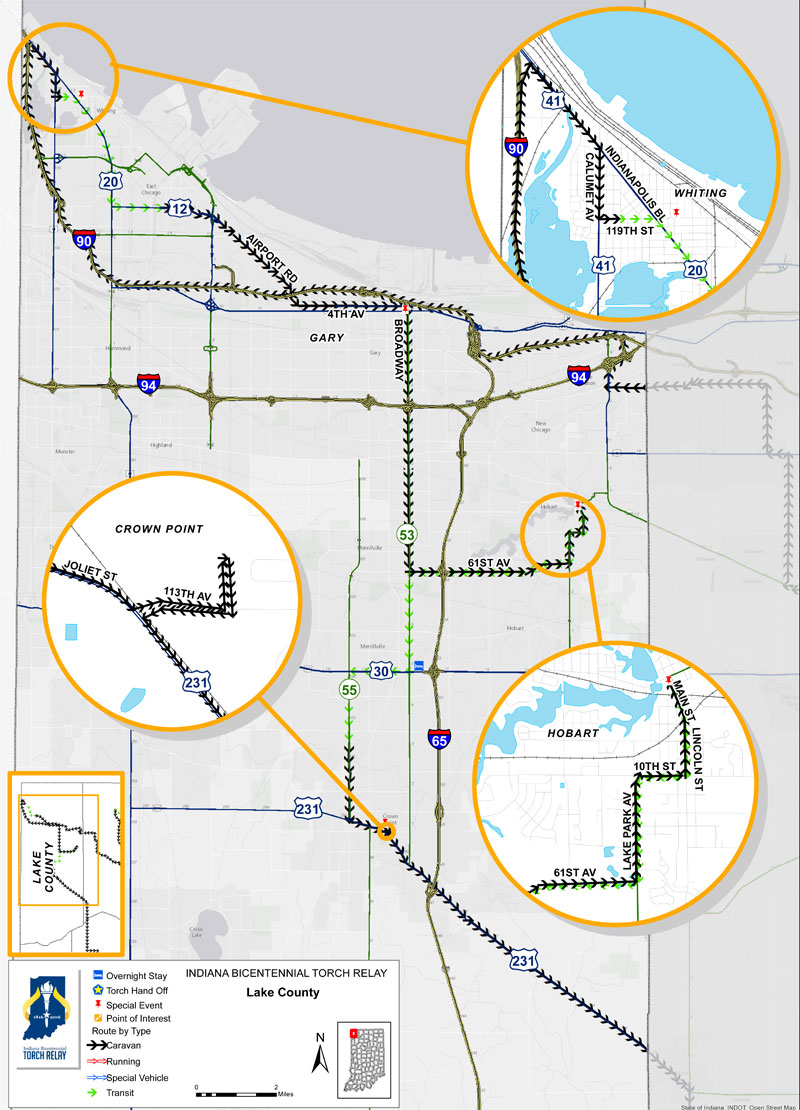 “The Indiana Bicentennial Torch Relay is not only the premier event of our state’s Bicentennial Celebration, but it is also an opportunity for Hoosiers from counties large and small to showcase all that makes Indiana unique,” said Holcomb. “The torch route was designed to highlight the state’s cultural fabric, our history and values, and the spirit of Hoosier ingenuity, igniting generations to come.”

Torchbearers will carry the torch through Lake County beginning on October 9 in Whiting, travel south on Broadway through Gary and end in Hobart. On October 11, the torch will be carried from Merrillville to Crown Point.

“The Lake County Bicentennial Committee has been working with Crown Point, Whiting, Gary and Hobart to plan special celebrations along the Torch Relay Route. We also received hundreds of torch bearer nominations to carry the torch and are looking forward to announcing those amazing men and women in June,” said Larry Blanchard, Chairman of the Lake County Bicentennial Committee.

The Indiana Bicentennial Torch Relay route for Lake County can be found at www.alongthesouthshore.com/ibc under the “Torch Relay” link.

The Indiana Bicentennial Torch Relay will start September 9 in Corydon, Indiana’s first state capitol, and culminate with a celebration October 15 on the grounds of the statehouse in Indianapolis. Accompanying the torch will be a high-tech mobile experience—an interactive museum that highlights important milestones during Indiana’s first 200 years and looks ahead to what the state’s future. Indiana State Police personnel will provide logistical support and escort the torch caravan over the course of the relay.

“As we reflect on Indiana’s first 200 years, the torch relay is a terrific opportunity to showcase the beauty and allure of Indiana. From the Lake Michigan shoreline to the rolling hills along the Ohio River, Indiana is full of special people and places. The Indiana Bicentennial Torch Relay allows us to show off both our state and civic pride as we honor our past while symbolically ‘passing the torch’ to future generations of Hoosiers,” said Newman.

Developed by IOTD, the relay is patterned after the Olympic Torch Relay and is designed to connect Hoosiers across the state and nation with their home state during the bicentennial year. The torch itself was designed by engineering faculty and students at Purdue University. The torch will be primarily transported by people, passing the flame from torch bearer to torch bearer. The relay will also employ other modes of conveyance that are symbolic of the history and heritage of Indiana, including watercraft, farm equipment, a racecar, horse and wagon, antique automobile and others.

Lake County received hundreds of nominations for torchbearers and those nominations are currently being vetted by the county torch relay coordinating committee. Torchbearers will be Hoosiers who demonstrate exceptional public service, excellence in their profession, acts of heroism or volunteer service to their neighborhood, community, region or state. Statewide, more than 4,000 torchbearer nominations were received.