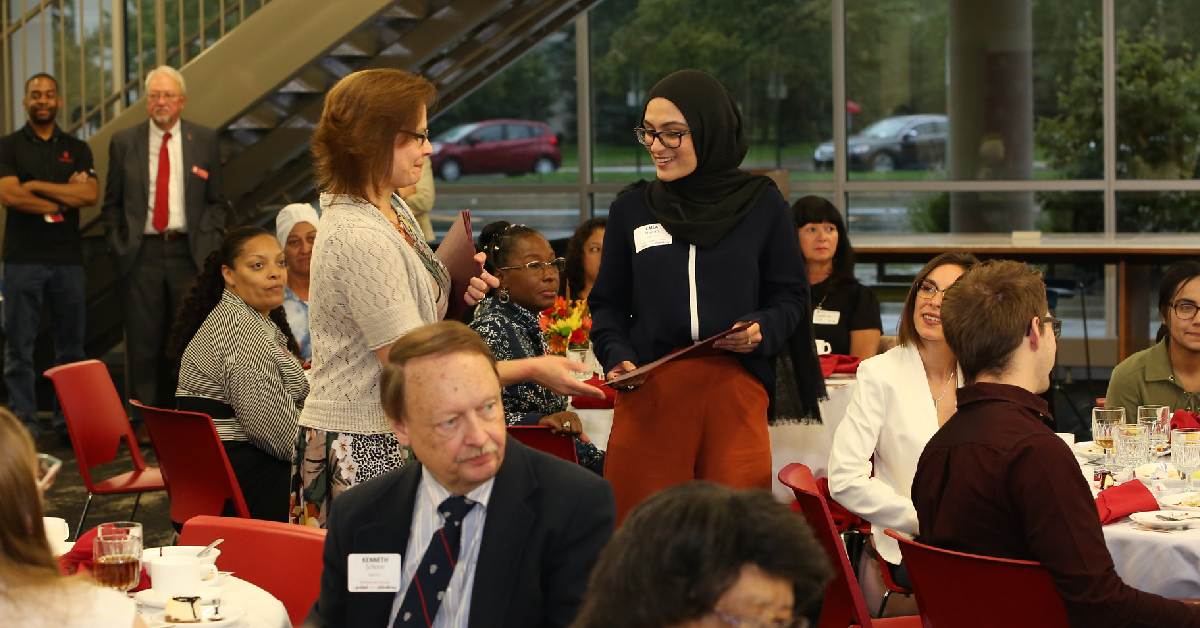 Thanks to generous support of donors, more students are able to achieve their dreams

Jay-Lan Halliburton of Gary says it wasn’t easy growing up in a family that struggled to make ends meet. His mother worked hard to support him and his brother, and as a result, had to sacrifice her own dreams of attending college.

View a photo album from the 2019 Annual Scholarship Celebration here.

The gratitude flowed out of this Indiana University Northwest performing arts senior as he went on to describe how it was a scholarship that made it possible for him to stay on course in the face of his financial circumstances.

Halliburton received the Debra Wiener Memorial Performing Arts Scholarship, made possible by the generous support of Bill and Leslie Nelson, whom he personally thanked in his remarks at IU Northwest’s recent Scholarship Recognition Luncheon.

Addressing his donors directly, he said, “This scholarship will allow me to go through my final year of college with one less worry on my shoulders but also with a smile in knowing that someone else believes in my dreams too. I hope to one day be able to give back to many future IU Northwest performing arts students and help them pursue their dreams as you have done for me.”

This is what the annual Scholarship Celebration at IU Northwest is all about—bringing scholarship donors and recipients together to highlight their impact.

“What I find most amazing and awe-inspiring is that while previously strangers, Jay-Lan and Bill and Leslie are now forever linked, thanks to one of the purest forms of altruism,” said Vice Chancellor for University Advancement and External Affairs Jeri Pat Gabbert. “Because Bill and Leslie believe in the power of education - in an IU degree – and because of their philanthropy, Jay-Lan does not have to focus as much on how to pay for college, instead he is now afforded with the opportunity to dream big, and to clearly envision his future, and his aspiring acting career.”

Halliburton and the Nelsons serve as only one example of this impactful partnership.

In the last four years, she said, the campus has received more than 4,000 gifts; established 29 new endowed scholarships of $25,000 or more; and gifts totaling more than $3.6 million came directly from IU Northwest employees.

“Because of you - our philanthropic supporters -- students’ dreams are coming true, lives are being transformed and pride and confidence is being firmly established,” Gabbert said.

One of eight campuses of Indiana University, IU Northwest is located in metropolitan Northwest Indiana, approximately 30 miles southeast of Chicago and 10 miles from the Indiana Dunes National Park. The campus has a diverse student population of approximately 4,000 degree-seeking students and 1,500 dual-credit students. The campus offers Associate, Baccalaureate and Master’s degrees in a variety of undergraduate, graduate and pre-professional degree options available from the College of Arts and Sciences, the College of Health and Human Services, the School of Business and Economics, the School of the Arts, and the School of Education. The campus is also host to IU School of Medicine-Northwest-Gary, which actively involves students in research and local healthcare needs through its four-year medical doctorate program. IU Northwest emphasizes high-quality teaching, faculty and student research and engagement on campus and in the community. As a student-centered campus, IU Northwest is committed to academic excellence characterized by a love of ideas and achievement in learning, discovery, creativity and engagement. Indiana University Northwest is an equal opportunity/affirmative action employer committed to achieving excellence through diversity. The University actively encourages applications from women, minorities, veterans, persons with disabilities, and members of other underrepresented groups.