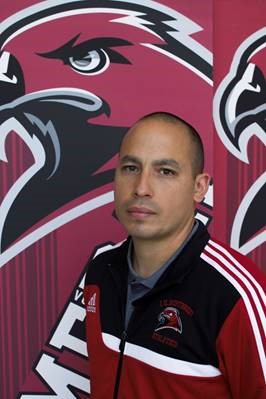 Heridia assumes the role of head coach from Executive Athletic Director Kristofer Schnatz who is leaving Indiana University Northwest to become the director of athletics at the State University of New York Maritime College, his alma mater.

Heridia is no stranger to the men’s basketball team, having served as associate coach for the last four years. During this time, he helped improve the RedHawks overall record, including a 2015-16 season in which the men’s team recorded its second-best record in school history at 14-15.

“IU Northwest Athletics is a growing program that I am extremely proud to be a part of,” said Heridia. “The coaching staff and I work extremely hard to build a winning culture here on campus. This process takes time, but with the talent we have brought in, plus the strong core of returning players, I am confident we can take that next step toward becoming a perennially winning team.”

Added Schnatz: “The RedHawk Athletics program has continued to grow throughout my tenure from about 35 student-athletes and three teams to 80 student-athletes and seven teams competing at the NAIA level. There has been a positive culture change within the athletics department and on campus and I confident leaving the men’s team in Heridia’s capable hands.”

Prior to IU Northwest, Heridia was Drew Trost's top assistant coach at Bishop Noll Institute (BNI) in Hammond. While with the BNI Warriors, Heridia helped lead the team to multiple accolades, including four conference championships, five conference tournament championships, and a 2011 state runner-up finish, with a 26-1 record, and an overall career record of 95-24.

Heridia played collegiate basketball at Saint Joseph's College in Rensselaer, Ind., before transferring to Calumet College of St. Joseph in Hammond. There he played two seasons under current University of Minnesota Assistant Coach Nate Pomeday. Heridia earned a Bachelor of Science in Organization Management from Calumet College of St. Joseph in 2004 and is currently working towards a Master of Science in Sports Science and Health.

About Indiana University Northwest
As one of seven Indiana University campuses, IU Northwest leads the region as the premier, urban campus dedicated to serving the needs of nearly 6,000 students from the state’s most diverse and industrialized region. Committed to helping its local Northwest Indiana communities thrive, IU Northwest is best-known for providing a personal, quality and affordable education close to home. IU Northwest positions its students to be leaders with more than 70 undergraduate, graduate and pre-professional degree options available from the College of Arts and Sciences, the College of Health and Human Services, the School of Business and Economics, and the School of Education. The campus is also host to IU School of Medicine-Northwest, which actively involves students in research and local healthcare needs through its MD program. For more information, please visit iun.edu.