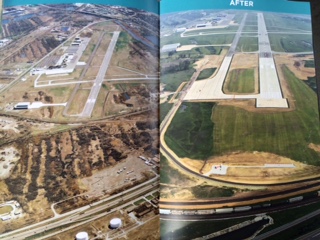 The Gary/Chicago International Airport formally opened its new, 8,900-foot runway to the applause of hundreds gathered below skies crowded with jets and planes practicing for the upcoming Gary Air Show. Airport Interim Director Dan Vicari called the new runway a game-changer for Northwest Indiana and Gary Mayor Karen Freeman-Wilson predicted that it would benefit the entire region.

The project was started in 2006 but only proceeded by fits and starts until about two years ago. It had an estimated cost of $90 million in 2006 that swelled to an actual cost of $174 million by the project's end.

Gary and region officials hope the opening of the expanded runway marks the beginning of a new era for Gary, as they craft other economic development projects such as a nearby Buffington Harbor industrial park.

An analysis conducted by the RDA in 2012 projects that the expanded airport will help create more than 2,000 new jobs in the region by 2025 and increase personal income by an estimate $156 million annually. Its impact was already being felt in the days leading up to the runway dedication ceremony with the announcement of two fresh private investments in the footprint of the airport.

First, Carmeuse Lime & Stone broke ground on a new rail terminal, part of a $31 million package of investments that include a new waste-to-energy facility. The company plans to add 30 to 40 jobs as a result of the expansion. Just hours after the groundbreaking, Mayor Freeman-Wilson unveiled a partnership with Terre Haute-based Garmong Construction Services to develop an 85-acre industrial park at the airport.

Both projects are being supported by a $7.5 million grant from the RDA. This grant matches funding from the City of Gary and the Indiana Economic Development Corporation to pay for $13.5 million in access road improvements to the sites of Carmeuse Lime and the new industrial park. The RDA is committed to helping the airport and city attract more jobs and investment to the region.

Don't Forget: We Need Your Help
Residents of Lake, Porter and La Porte counties are being asked to weigh in on transit-oriented development (TOD) and service improvements on the South Shore commuter rail line. The online survey is part of an effort by the Northern Indiana Commuter Transportation District (NICTD) and the Northwest Indiana Regional Development Authority (RDA) to secure Regional Cities funding for TOD and other projects on the South Shore main line.

Encouraging development around existing transit service by both the public and private sectors can improve the entire regional economy by raising incomes and property values.

Please take a few minutes to complete our survey. Please feel free to skip any questions that you do not feel comfortable answering. This survey and the result are confidential and will be used as part of the application for funding for our area.