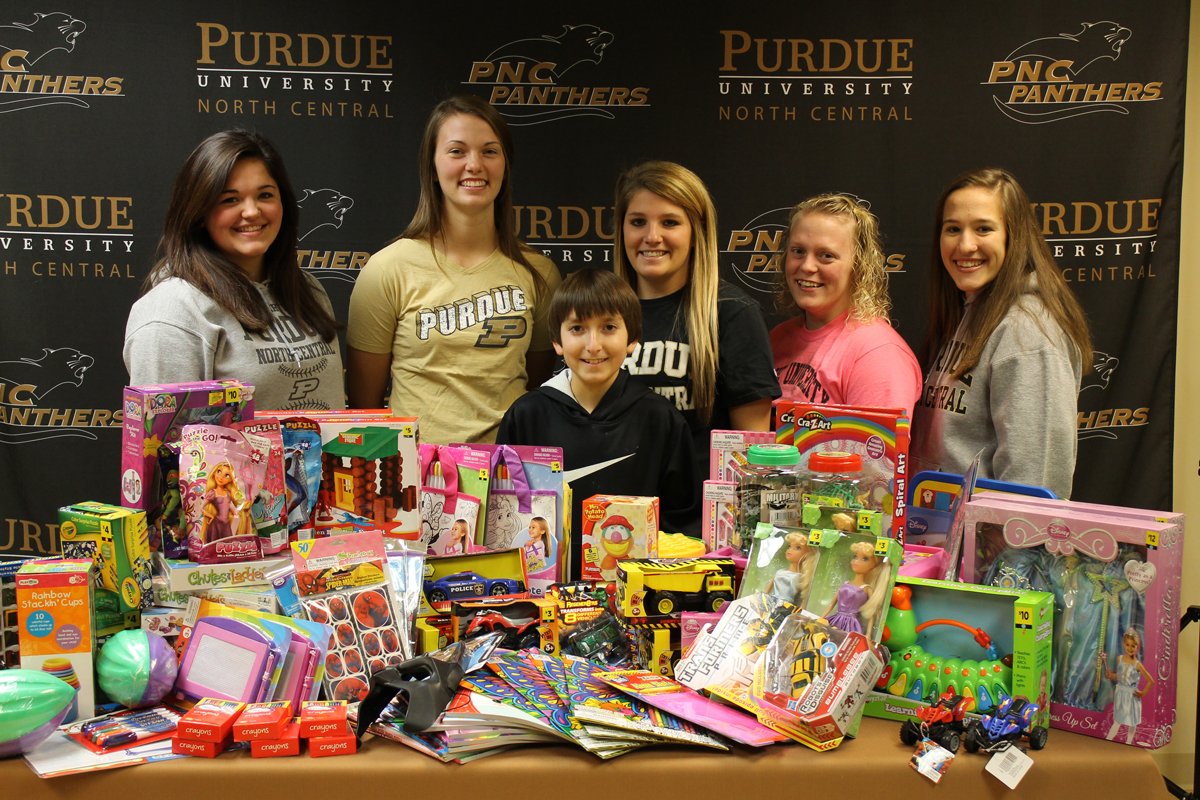 With the holidays approaching, the Purdue University North Central women's softball team members knew they wanted to take on a project that would brighten the holiday season for deserving children.

"We love taking on community service projects," said Leslie London, of Westfield, an outfielder for the Panthers. "We are happy to have the opportunity to help."

The team enthusiastically threw its support to Daniel's Cause, a gift-giving resource created by Daniel Alexander of Westville. The 12-year-old was diagnosed with an inoperable brain tumor in 2010. During his many days he spent at the University of Chicago Comer Children's Hospital, the hospital's Child Life Services provided toys to Daniel and the other hospitalized children for them to play with and keep, at no cost the child's family. It was a service that Daniel and his family appreciated.

With Daniel at home and doing well, he decided to repay the good will he experienced at the hospital, explained his mother, Karen Alexander. The hospital will have about 150 young patients in its care on Christmas day, with the average age of 7, so it was important to Daniel to make sure the youngsters could enjoy their holiday by helping to make sure that Santa had enough toys to deliver to each child, said his mother.

A PNC connection already existed with Daniel's Cause as former PNC player and PNC Athletic Hall of Fame player Jessica Brannagan is Daniel's aunt and has helped to support Daniel's Cause in the past.

When the players decided to raise money to buy presents to donate to Daniel's Cause, Coach Jeff Boardman promised to match the money the team collected. They thought it would be great to contribute $5 per player, but many contributed more as did friends and families, raising $500.

"We had fun shopping for the toys," said Boardman. The team members worked hard to stretch their dollars as far as possible. Some admitted they bought toys they would enjoy playing with themselves.

"We all love kids, so this was a great project for us," said Abbey Scowden, of Lafayette, a catcher and team co-captain.

Rohni Beck, of Churubusco, a catcher, noted that as a Nursing major, Daniel's story touched her heart and she did not hesitate to help.

"If I can do something to put a smile on a child's face, I'll do it," added Amy Scott, of Frankfort, a pitcher/outfielder, who has helped out in the campus Panther Cubs child care. She also helped to collect toys that went to two LaPorte families.

Daniel smiled as he looked over the toys. "This makes me happy," he said quietly.

His mother noted that the family tradition of giving started several years before when she would periodically ask her children to gather up toys they had outgrown or did not play with so that they could be donated to charity.

PNC Athletics encourages its student athletes to help out where they are needed in the community. The Softball players also volunteered with the LaPorte Salvation Army to help prepare food for a meal it hosted.

"We want to have well-rounded student athletes who perform well in all aspects of life," said Doug Cassell, PNC athletic trainer. "Many opportunities are presented to our team through softball. This is a way for them to give back to the community that has supported them for so long."

This ongoing commitment to volunteerism helped PNC earn the National Association of Intercollegiate Athletics (NAIA) Champions of Character distinction each year since the award was first granted in 2002.