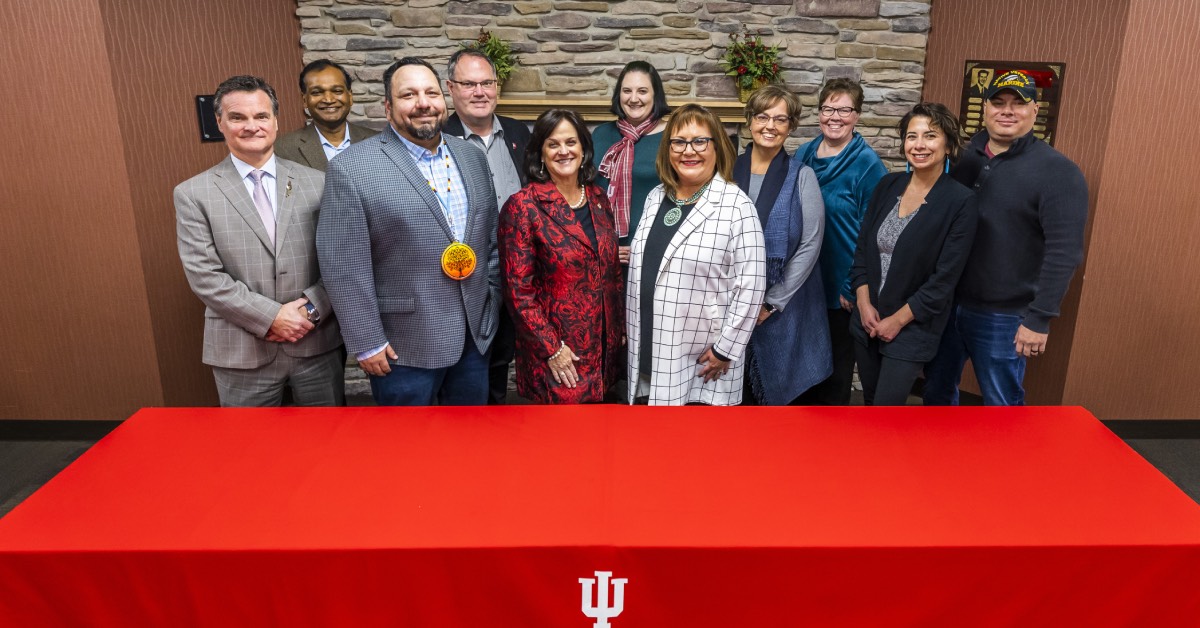 Under the terms of the agreement, IU South Bend shall provide eligible Pokagon Citizens and employees with Institutional Awards that reduce or eliminate the difference between in-state and out-of-state tuition rates.  Although the Pokagon Band is federally recognized in the state of Indiana and owns and operates several business within the state, many of the Tribe’s citizens and employees reside in Michigan and other states.

Commenting on the Institutional Award Program, Rebecca Richards, Chairwoman of the Pokagon Band of Potawatomi Indians said, “The Pokagon Tribal Government strives to make investments that will have a positive impact for our Tribe, seven generations into the future.  Access to higher education opportunities and life-long learning are critical to the long-term success of our Pokagon Citizens and the individuals that are employed by our various business entities.  Despite having hundreds of Pokagon Citizens and employees that reside in the state of Indiana, we have thousands more that reside in Michigan and other states.  We are extremely pleased to renew and expand our partnership with IU South Bend, to ensure that all of our citizens and employees have access to the same high quality educational opportunities, from one of the top universities in the region.”

IU South Bend Chancellor Susan Elrod said, “We are thrilled to partner with the Pokagon Band to create more opportunities for Pokagon Citizens to access higher education.  A college degree helps students transform their lives and the lives of those around them.  IU South Bend students graduate and become difference-makers in their community, which we know is important to the tribe.  We welcome Pokagon Citizens and employees as students who enrich our campus community with their talents and traditions and look forward to supporting them as they pursue their degrees and their passions.”

The Pokagon Band of Potawatomi’s sovereignty was reaffirmed under legislation signed into law by President Clinton in September of 1994.  The Pokagon Band is dedicated to providing community development initiatives such as housing, education, family services, medical care and cultural preservation for its more than 6,000 citizens.  The PokagonBand’s ten-county service area includes four counties in Southwestern Michigan and six in Northern Indiana.  Its main administrative offices are in Dowagiac, Mich., with a satellite office in South Bend, Ind.  In 2007, it opened Four Winds Casino Resort in New Buffalo, Mich., followed by Four Winds Hartford in 2011, Four Winds Dowagiac in 2013 and Four Winds South Bend in January 2018.  The Pokagon Band operates a variety of businesses via Mno-Bmadsen, its non-gaming investment enterprise.  More information is available at www.pokagonband-nsn.gov, www.fourwindscasino.com and www.mno-bmadsen.com.

Indiana University South Bend is this area’s only comprehensive public university, dedicated to serving the needs of North Central Indiana and beyond.  As a regional campus of Indiana University, IU South Bend provides a diverse population the opportunity to affordably earn a prestigious IU degree through its quality graduate and undergraduate programs.  With its caring faculty and staff, IU South Bend is committed to an inclusive, student-centered approach that focuses on preparing its students for both the workforce and postgraduate education through rigorous coursework, research, and creative activity.  IU South Bend is a catalyst for social mobility that contributes to the vitality of its region by educating informed individuals, thoughtful stewards, innovative professionals, and responsible leaders.  Learn more at www.iusb.edu.