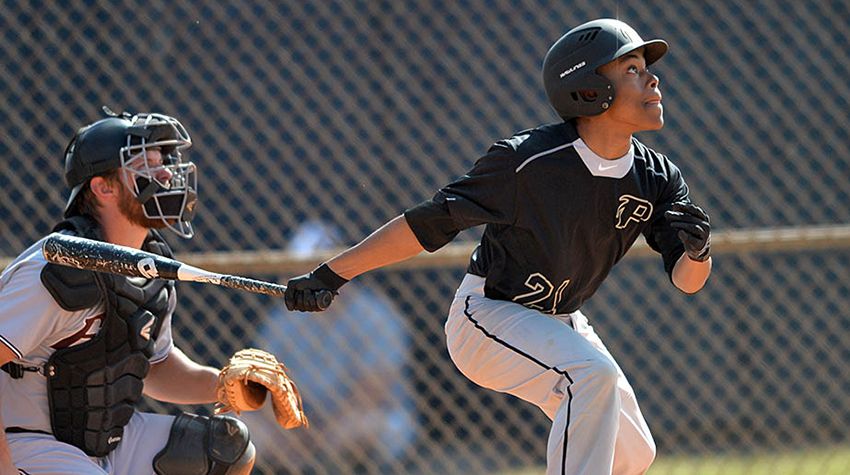 The Peregrines (5-5, 1-0) host the Trolls (17-8, 1-0) in a noon doubleheader at Albert’s Diamond Jewelers Field at Dowling Park Saturday to conclude the three-game league series, both team’s conference opener.

But the Trolls answered quickly in the bottom of the inning, scoring two runs on three hits and an error to take a 2-1 advantage. TCC would tack on another run in the fourth before the Peregrines responded with a two-run fifth to tie the game at 3-all.

Senior Cody Dykema (Schererville, Ind./Lake Central) recorded the big hit in that inning, drilling a bases-loaded single to left field to score Crussen (single) and pinch runner Drake Larriuz (Lake Villa, Ill./Lakes Community). But that was all the Peregrines’ offense would produce, as the Trolls would go on to score five more runs in their final three at-bats to come away with the win.

Trinity Christian tallied 15 hits compared to eight for Purdue Calumet, as Trolls’ starter Tanner Reklaitis picked up the win, striking out three and walking three. Peregrines’ starter Phil Madvek (Hobart, Ind./Hobart) took the loss, striking out two and walking one in a 5 1/3 innings.

Crussen finished 2-for-5 with a run, Harris was 2-for-3 with two walks and a RBI, and Dykema finished 1-for-5 with two RBI to lead Purdue Calumet hitters.

Alberts Diamond Jewelers Field is located just east of Kennedy Avenue and north of Interstate 90/94. The entrance to the main parking lot for Dowling Park is located off 175th Street, behind Faith United Church of Christ (3030 175th Street). Handicap parking is available.

Visiting team buses are asked to park in the Hammond F.OP. parking lot, located at 7527 Kennedy Ave, and drivers and teams may enter the park from the North Gate, located near the baseball stadium's left field line.

NOTE: Parking is prohibited along 175th Street or in the Jean Shephard Center lots. Officials/Referee Parking is located in the North Lot.

NEW TO 2016: Admission to all Purdue Calumet baseball games is $6 for adults and $4 for children ages 4-17. Children 3 and under are free. All Purdue Calumet and Purdue North Central students with valid ID are free. Season passes are available, starting at two adult passes for $40. For more info, visit http://www.purduecalsports.com/baseball/news/2015-16/2300/peregrine-baseballsoftball-season-tickets-on-sale-now/

LIVE LOOK
Live stats and audio will be available for Saturday’s contest at http://portal.stretchinternet.com/puc/

An RBI-double from Luke Weston gave the Trolls the lead, and would later score on a Peregrine defensive error to give TCC a 2-0 lead.

In the bottom of the fifth inning, the Peregrines (6-6, 1-2) would even the score at 2-2, thanks to a 2-RBI single from Cody Dykema (Crown Point, Ind./Lake Central)which plated Cole Garcia (Anaheim Hills, Calif./Canyon) and Giulio Fantasia (Alpena, Mich./Alpena).

The Black and Gold broke open the scoreboard in the sixth inning, after the Peregrines used some small-ball tactics to give them the first lead of the game, 4-2.

Freshman Avondre Harris (Mishawaka, Ind./Mishawaka) would keep the inning alive with a 2-RBI single, followed by an RBI-single from Dykema which gave the Peregrines a 7-2 lead.

After six stellar innings from Willie Bennett (Santee, Calif./West Hills), junior Matt Sandoval (Highland, Ind./Bishop Noll) would close out the game to give the Peregrines their first CCAC win of the season.

Bennett gave up just five hits in his six innings of work, with a career-high seven strikeouts to pick up his second win of the season. The 6-foot-1 right hander has 12 strikeouts on the year, already surpassing his season-high strike out total from last year, when he struck out eight batters in just over 30 innings.

Game 2: Trinity Christian 7, Peregrines 4
The Trolls would score first in the opening frame of Game 2, scoring two runs on a single from AJ Hyatt to give TCC the early 2-0 advantage.

Senior Eric Sickles (Benicia, Calif./Benicia) would cut the deficit to one run, after slicing an RBI-double down the left field line to score Dykema.

Harris would connect on an RBI-single in the bottom of the second inning, plating Garcia to even the score at 2-2.

An RBI-single by Tyler Crussen (Valparaiso, Ind./Wheeler) gave the Peregrines a 3-2 lead in the bottom of the fourth frame, but the Trolls would take back the lead in the sixth, scoring on a pair of RBI-singles to take the 5-3 lead over the Black and Gold.

The Peregrines would score one more run in the seventh, but that was all the Trolls would give up, defeating the Peregrines 7-4.

Freshman Josh Arnold (Lowell, Ind./Lowell) would toss the final two innings of the game, giving up just one hit.

Purdue Calumet returns to action Wednesday, Mar. 23 when they travel to take on St. Ambrose in a CCAC doubleheader starting at 2:00 p.m. (CT)

Game 1: Peregrines 8, Viterbo 5
After a scoreless first two innings, the Black and Gold (7-9) broke open the scoreboard in the bottom half of the third, thanks to a 3-RBI double by Olivia Sardella (Dyer, Ind./Lake Central).

The Peregrines would keep the inning alive, afterAllyson Leach (Demotte, Ind.) would connect on her first home run of the season to increase their lead to 5-0.

Sophomore Holly Pagan (Bartlett, Ill./Bartlett) would also notch her first homer of the season later in the inning to give the Black and Gold a 6-0 advantage.

Viterbo (6-14) would cut in to their deficit in the top of the fifth inning, scoring three runs on three hits, making it 6-3 in favor of the Peregrines.

Purdue Calumet would tack on two more runs in the bottom half of the fifth, thanks to a 2-RBI double by Samantha Oppenhuis (Munster, Ind./Illiana Christian) which scored Hannah Lopez (Granada Hills, Calif./Bishop Alemany) and Morales to put the Black and Gold ahead 8-3.

The V-Hawks would score two more runs in the sixth, but that was all they would get, as the Peregrines came away with the 8-5 win.

Pagan earned her third win of the season, pitching 4.2 innings of work, letting up three earned runs and striking out three.

Freshman Sydney Schmitt (Anderson, Ind./Anderson) would pick up her first career save, after closing out the game in the seventh inning without allowing a run.

Game 2: Peregrines 6, Viterbo 1
Purdue Calumet jumped out to an early lead to start of the second game, with Pagan connecting on an RBI single followed by a 2-RBI single from Lopez to put the Peregrines up 3-0.

Morales would continue her hot streak at the plate with a 2-RBI double in the second inning which scored Haley Loden (Crown Point, Ind./Lake Central) and Tessa Steffens (Litchfield, Ill./Litchfield).

Viterbo would score their lone run on a Kelsey Ludwig ground out, but starting pitcher Carly Murphy (Munster, Ind./Munster)would shut down the V-Hawks for the remainder of the game, leading the Black and Gold to a 6-1 win.

Murphy pitched a complete game without allowing an earned run, allowing just five hits and striking out five en route to her third win on the season.

Loden, Leach and Morales would lead the offensive efforts for the Peregrines with two hits each and four runs scored.

The Black and Gold return to action on Tuesday, Mar. 22, when they travel to Clinton, Iowa to face off with Ashford University in a doubleheader starting at 5:00 p.m. (CT).