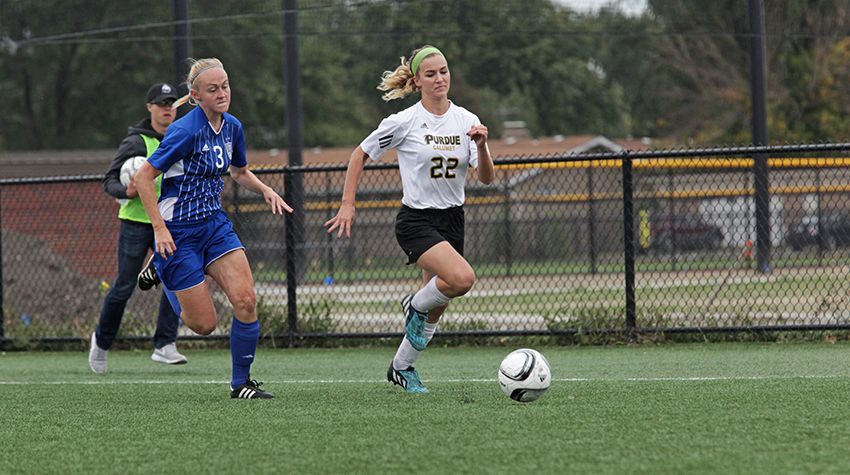 Nikki Post opened TIU’s scoring with a goal in the 4th minute, corralling a deflected ball in the box for the score to give the visitor an early 1-0 lead. Gina Collesano added the second score in the 29th, taking a pass from Kathryn Baccash off a TIU cross to find the back of the net.

Senior Kami Graber (Nashville, Ind./Brown County) led Purdue Calumet in shots, with both of them on goal. Defensively, Lucie Ashmore (Greystones, Ireland/St. Gerards School) had two saves in the start and classmate Kelley Sharp (Seymour, Ind./Seymour) stopped two shots in the second half as the two split time in goal.

Purdue Calumet returns to action Wednesday, Oct. 7, when the Peregrines travel to St. Francis (Ill.) for a CCAC road match in Joliet, Ill. 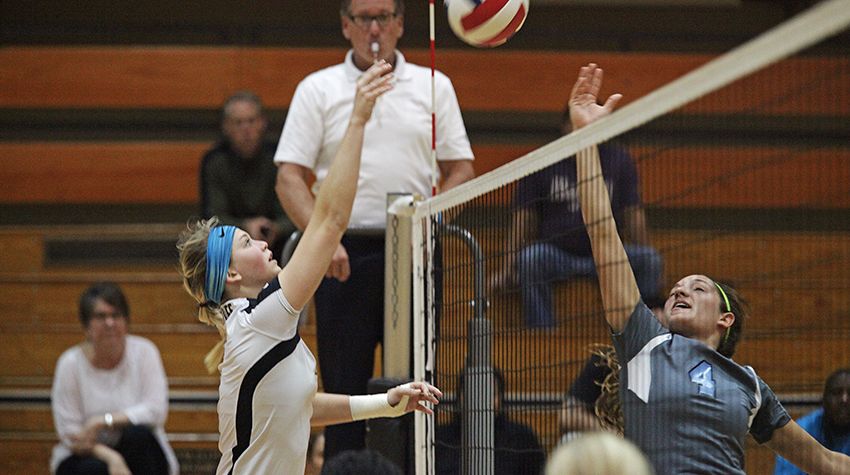 The Peregrines (6-9, 2-3 CCAC) battled back in the first set after trailing 8-2, after a kill from Gabrielle Martin (DeMotte, Ind./Kankakee Valley) and service ace by Kylie Tincher (Sellersburg, Ind./Rock Creek Academy) put the Black and Gold within 1 point, trailing 15-14 midway through Set 1.

The Trolls would take a 24-21 lead late in the set, but the Peregrines battled back and picked up the next three points to even the score, 24-24.

TCC would use a kill from Kacie Stoll and service ace by Karliegh Krchmery to take the last two points and win Set 1, 26-24.

Purdue Calumet would trade points with Trinity Christian for the first half of Set 2, before jumping out to a 19-15 advantage after a trio of kills by Martin gave the Peregrines momentum for the rest of the set.

A pair of kills by Jenna Pasko (Lansing, Ill./T.F. South) and one from Carissa Jones (Hammond, Ind./Bishop Noll) rounded out the dominant offensive performance in Set 2, coming away with the 25-19 victory.

The Black and Gold hit a .250 attack percentage with 14 kills compared to just six kills and a .042 hitting percentage for the Trolls in Set 2, which carried the Peregrines to even the match at 1-1.

Purdue Calumet would take a 7-6 lead early on in the third set, but the Trolls would rack up the next 12 points in the set, eventually using that momentum to pick up the 25-16 win in Set 3.

The Trolls would jump out to a 15-8 lead in the fourth set, but the Peregrines would stay resilient, rallying behind a pair of kills from Jones put the Black and Gold with-in two points, 20-18 later in the set.

Trinity Christian would score five out of the last seven points of the set, to take Set 4, 25-20 and defeat the Peregrines for their fifth straight conference win of the season.

The Black and Gold were led by Martin who had 12 kills, while Jones recorded nine kills and a .189 attack percentage and to service aces to lead the offensive attack for the Peregrines.

Purdue Calumet will return to action this weekend, as they will compete in the CCAC Crossover at Calumet St. Joseph on Oct. 2 and Oct. 3.