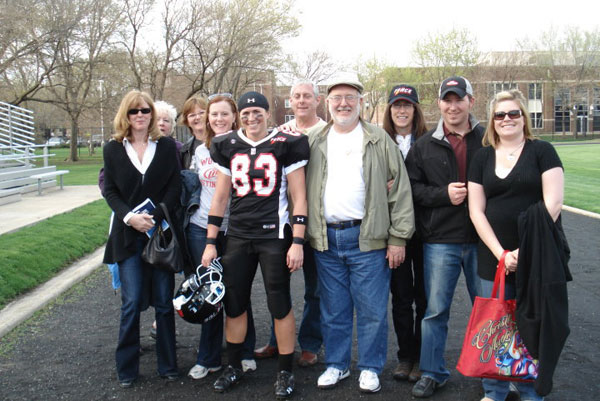 I think my mother would sleep a lot better on Friday nights if I hadn’t chosen to play football. She is making progress though – I haven’t seen her have to leave the stadium yet when she gets nervous. In the past, well actually, currently during games I coach, you will find my mother wondering the halls of VHS during home games as nervousness gets the best of her. While her nervous habits have remained constant since I was 14 - she has had to bring back the prayer she said with my brother every Friday night before his games at Valpo High – we text it back and forth on Saturday afternoons.

I’m pretty sure that my father thought after he watched my brother play in the state finals at the Hoosier Dome his senior year that that would be it for watching his kids play football. I bet you he never thought his daughter would be competing on the gridiron. The conversations that my father and I have had on the phone now include football and hoops. His football coaching experience spans three decades from the middle school to college level. His access to football gear was part of the reason that I was a football player for Halloween for maybe three straight years as a kid. He came to a practice my first year to check it out and make sure that this was something legit his daughter was getting into. Now, he wears his Chicago Force shirt with pride at home and in the stands at our games.

First time I cried from being happy was when I watched my brother beat Penn, finally, in the regional his senior year. I jumped the fence and ran on that field and gave him a big hug! I learned to play football from watching him. He and his wife were at the conference championship game on the 21st and it was so awesome to share that moment with them. He has hooked me up with some equipment (he is a football coach) and always tells me to keep my head up! I think about my brother every time I put my helmet on.

From my family to my very best friends, Saturdays in Evanston have become a time to get together and see the people that I love the most. With my crazy schedule I don’t get a lot of family time OR time with my friends. However, they have all become part of the extended Force Family. Without their support, I wouldn’t be playing. The people closest to me and this time spent together on Saturdays is a huge reason why I continue to still play.

If an outsider looked at a typical practice day for me during the school year they would see this.

Then they might tell me I’m crazy. Maybe I am. Maybe all fifty or so of the women that play for the Force are crazy. I guess you have to be to do what we do. Playing football for the Force is a way of life – there is no other way to look at it. It is hard to remember what my springs/summers were like without football. It is also hard to remember what it feels like to NOT be sore and to be fully rested. We don’t get access to fancy training rooms and immediate medical care as we walk off the practice field. For many of us we walk off the practice field with ice bags wrapped around a few body parts then when we get home we fill our tubs with a giant bag of ice and we spend upwards of 12 minutes freezing our bodies into feeling better. (I estimate I’ve spent $500 on bags of ice this summer alone.)

Most of us have careers which keep us on our feet for hours at a time and yet after eight, 10 or 12 hour days we come to practice. We have nurses that work 12 hour shifts then drive straight to practice. On June 16th, I coached three games in Triton, IN then drove two hours to our football game in Kalamazoo, MI. Think about what you like to do when you get off work? Now imagine giving that up for spending an hour and a half in a car. Spending three hours on a football field running, hitting, running, hitting, running, hitting, etc (oh yes and occasionally – some of us more than others - you will get screamed at by a coach). Would you do it?

No we don’t get paid. We pay hundreds of dollars to play. Enough said.

So why do I still play?

There isn’t a simple answer to this question. Like I said in the opening, the chance to spend time with my family and friends is one reason. Three words describe the next reason. MORE TO GIVE (thank you Tami). I believe many of us as athletes are not ready to be done competing. We feel we have more to offer to someone – somewhere – and in some sport! Lucky for us, the Force gives us this competitive opportunity to play a sport at a very high level. Finally, after you immerse yourself in the organization and meet the people involved it is hard to walk away. Playing for the Force offers not only the opportunity to have new teammates, but to make new friends. I have met people from all walks of life that have had so many experiences and my life is better because my Force teammates and coaches are a part of it.

That is why I play.