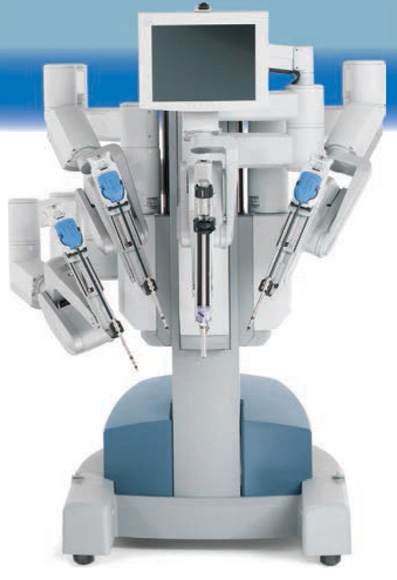 From the Winter 2013 StayHealthy publication

Associates in Surgery uses advanced technology for minimally invasive surgery. Porter Regional Hospital oers its patients robotic-assisted surgery with the use of the daVinci® Surgical System.

"A shorter hospital stay. Less risk of infection. Less blood loss. Faster recovery and a quicker return to normal daily activities. ese are some of the benets our patients may realize with robotic-assisted minimally invasive surgery and exactly why we are committed to staying abreast of new technology at Porter Regional Hospital," explained Board-Certified General Surgeon, Jac Cooper, MD.

The Robotic Surgery Alternative Robotic-assisted surgery offers an alternative to traditional open surgery and conventional laparoscopy. The system – comprised of a camera, thin robotic arms and a console located at the bedside of the patient – gives the surgeon the ability to view the entire surgical site in three-dimensional detail, magnified 10 to 15 times, and perform highly detailed, complex procedures. Instead of a single, large opening in the patient’s body, one or more small incisions – usually less than a half-inch in length – are made at the surgical site. The surgical robot usually has three or four arms: one that contains a small camera, two that act as the surgeon’s hands, and an optional third arm that moves obstructions. The surgeon follows the same steps used in traditional surgery, but the robotic arms act as an extension of the surgeon’s hands, translating hand motions in real-time synchronization into microscopic movements inside the patient’s body.

According to Cooper, this technique offers several advantages for the surgeon: crisp, highly detailed images of the surgical area; the ability to perform complex, precise maneuvers with greater dexterity and control, without disrupting surrounding tissues; and greater freedom of movement in a confined space.

Conn adds that one of the most significant improvements the daVinci Surgical System offers surgeons over the laparoscope is the field of vision it provides. When using a laparoscope physicians are seeing the surgical site in two dimensions; however, when the physician is sitting at the console maneuvering the robotic arms, the surgical site is displayed in three dimensions. This enhanced visualization provides views of all of the interior structures.

In addition to the excellent visualization, both Cooper and Conn remarked on the extended range of motion they have with the robotic platform. "The 'wrists' on the end of the robotic arms are modeled after the human wrist but provide even greater dexterity than the human hand. We can be very precise even though we are working through tiny incisions," Cooper said. The improved flexibility and precision allow physicians performing robotic-assisted surgery to carefully move surrounding organs, tissue and nerves out of the surgical field.

Cooper added that more importantly, there are several advantages for the patient. Because the surgery allows the physician to go directly to the site with minimal disturbance of other body structure, it results in less trauma to the patient’s body. The smaller incisions also mean less damage to surrounding tissue and reduced blood loss, so there is usually less healing time required for the patient to recover.

"Physicians have been performing robotic surgery at Porter since 2008, and, before that, we all had solid backgrounds in a variety of open and minimally invasive laparoscopic more quickly.”

Are you a candidate for robotic surgery?

To learn if you are a candidate for robotic-assisted minimally invasive surgery, contact you physician. Your doctor will evaluate the option of robotic surgery with you during the planning process for your surgery, taking into consideration factors including your age, weight, general health, and any prior surgical history, then recommend the most appropriate plan for your individual case.

To learn more about robotic-assisted minimally invasive surgery, visit porterhealth.com or call Associates in Surgery at 219-983-6240.

Drs. Cooper and Conn are members of the medical staff at Porter.