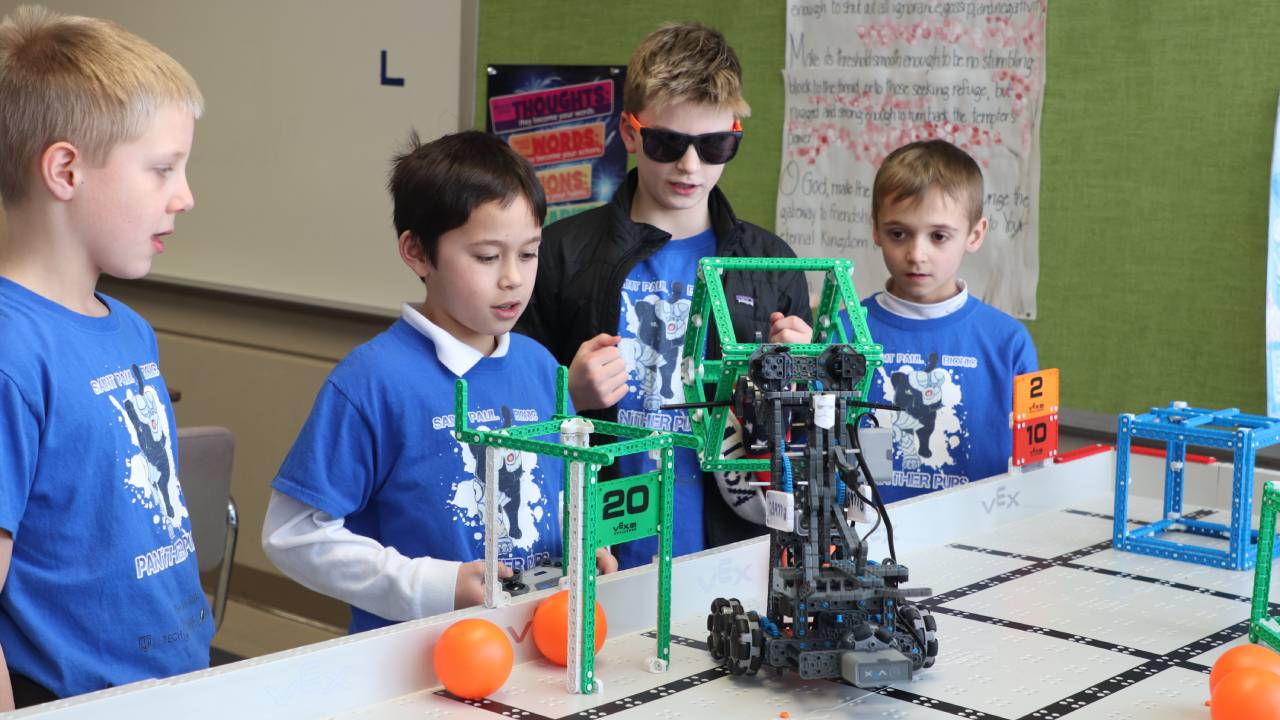 Imagine joining a brand new club and receiving recognition for that club within the same year. That’s just what students at Saint Paul Catholic school experienced when they joined the Bionic Panthers, the robotics team that is brand new to the school this year. To break it down: for the first time in its history, Saint Paul Catholic School implemented a robotics club, and that club has gone on to receive several awards thus far in the span of its young life. Comprised of 29 students broken into three teams, one made up of middle schoolers and the other two of elementary schoolers, the Bionic Panthers have surpassed expectations, proving that its members are as driven as they are curious.

Brittany Felker, a middle school science teacher at Saint Paul Catholic School, first toyed with the idea of starting a robotics club last year when an eighth-grader expressed a desire to be part of one. After that student graduated and Felker did some research on the subject, she found she couldn’t get the idea out of her head.

“I applied for a grant for a robot on a whim,” she admitted.

Felker ended up securing three grants leading into the team’s successful year, the final of which benefitted a team comprised of mostly females. Stunned by her success in earning the grants and in the school community’s outpouring of support and interest in a robotics club, Felker established the Bionic Panthers. She was thrilled with the faction of middle school students who became involved, and she was equally thrilled by the number of elementary school students who expressed interest—but the initial thrill was tinged with a bit of panic at that large amount. Luckily, some fellow faculty members were in the pipeline to help.

“Brittany did a call out, and she initially was just going to open up the opportunity to middle school students,” said Melissa Czekaj, leader of the Bionic Pink Panthers, one of the two elementary school teams. “But there was such a huge interest in the program, especially among elementary school students, that the influx was a little more than she could handle,” Czekaj laughed.

Czekaj is a secretary at Saint Paul Catholic School, and when she took notice of Felker’s struggle, she decided to offer her assistance. Czekaj’s own son had been involved in Science Olympiad when he was in high school, and she felt she could use her own experience to assist Felker in this brand new endeavor. Little did Czekaj know that the VEX Robotics Competition was entirely different than the materials Czekaj’s son worked within his activity. Nevertheless, she discovered she immensely enjoys leading the Bionic Pink Panthers.

The initial appeal of the club transformed for some of the students.

“For the first couple of practices, a lot of the kids just wanted to build. They had it in their head that this was almost a sort of LEGO Club,” Czekaj laughed. “But then they learned pretty quickly that this is a team where they have to follow directions, to meet a goal, to learn through trial and error.”

For Felker, and her subsequent fellow robotics team leaders, one of the key advantages of a robotics club was the leadership skills it promoted. The Bionic Panthers are entirely student-led—everything from the design of the robots to the way they’re built, and the delegation of team members tackling each step of the club’s goal is led by the students themselves, not the teacher’s facilitating the teams.

“We have a pretty good sports program at Saint Paul, and our robotics teams just provide another outlet for students to demonstrate leadership skills,” Felker said. “In general, I feel like this club teaches members to learn those soft skills that are so important in everyday life, no matter what they pursue—teamwork, time management, problem-solving, communication.”

Felker said that, during competitions, the teams are paired with random competitors, forming an alliance rather than creating an enemy.

“This teaches them how to communicate with strangers, and to come up with the best strategy,” Felker said, “which are huge, important skills to learn in any aspect of life or a career.”

Allowing the students to govern themselves in the group was a challenge at first, especially for Saint Paul Catholic School art teacher Sarah Rowe, who leads the Bionic Panther Pups.

“As a teacher and parent, I sometimes want to step in and be like, ‘What are you doing? No, do it this way!’ but I’ve learned to quiet that part of myself and just let them take charge,” Rowe said.

Rowe, Felker, and Czekaj were happy to let this inaugural year of the Bionic Panthers teams be a year of trial and error similar to the kind the teams’ coders undergo.

“This is our learning year, and the main purpose is to have fun,” Rowe said.

So imagine their surprise when they learned that the Bionic Panther Pups had received the VEX IQ Challenge Excellence Award at the state qualifier on February 1, automatically qualifying them to compete at the Indiana VEX Robotics State Championship on March 7. The largest state robotics competition in the nation, the Indiana VEX Robotics State Championship is held at Lucas Oil Stadium where 385 Hoosier teams will compete. In addition to this honor, the Bionic Panthers earned the Design Award, and both the Bionic Panthers and Bionic Pink Panthers earned the Robot Skills Champion Award at a previous competition.

“The whole goal here was to just have fun, and it’s incredible that we’ve gotten as far as we have,” Felker said. “To even be in the running for state is amazing to us.”

One has only to study the students as they assemble the pieces to their bots, drive them through obstacle courses, or take meticulous notes in their engineering logs to realize how invested they are in the club. Along with teaching them those valuable soft skills and coaxing an interest in technology, Bionic Panthers allows them to take pride and ownership in their hard work, to learn to rise above failure, and cultivate a passion many of them are just discovering.

“My sister first brought home the call-out sheet for the club, and I thought it looked interesting,” said Maggie Kuka. “I won’t lie, I thought it was a battle bot team at first! But as soon as I started building it just drew me in. It’s very challenging to learn it all from scratch. I really like the teamwork aspect of it, and how we each have our own little job.”

After building, Kuka soon found she enjoyed note-taking for the team, as did her teammate Lucas O’Shea, who color coded each section of their engineering log. Coder John Clements likes quietly calling the shots.

“I’m a big fan of math, and coding involves a lot of calculating and measuring angles and degrees, deciding where and how the claws [on the robot] should move up and down,” Clements said. “It takes a lot of patience, a lot of dedication, and a lot of trial and error.”

Rowe’s daughter, Amy, and Sophia Clements are members of the Pink Panthers team, and they enjoy coding and programming, too.

Johnny Bramfeld, a third-grader on the Panther Pups team, said his favorite part is either driving or constructing.

“Driving is really challenging,” he said. “You have to get the timing just right when you’re picking up cubes or placing them down, and you have to come up with a strategy to save the most time.”

“Driving is the biggest job you can have in competitions,” Meeks said. “I like being more active in the competitions and not being on the sidelines as much.”

“Me too,” Murphy said. “You learn a lot more about the robots when you’re driving them, too.”

Lilly Meeks, a 4th grader on the Panther Pups team, said she prefers doing the building that leads up to competition time.

“It’s fun because you get to work with a lot of pieces, and you get to win competitions and get farther and farther,” she said.

A lot of the students appreciate the opportunity to just have fun with each other.

“During our last practice, we got to make an obstacle course out of everything in the classroom we could use,” Lilly said.

“I joined because I thought I could be a good problem solver,” Giovanni Pentangelo, a 4th grader on the Panther Pups team. “There are issues with the claw, it malfunctions sometimes. I help out with those times. But it’s really fun working with the technology and the robots.”

“I’ve always been really into mechanics and robotics,” Bramfeld said. “When I first heard about this, I was like, ‘Yes, that is something I would love to be a part of.’ I absolutely love it, it’s just really fun.”

So are the Panther Pups excited about their trip to the state competition next weekend?

“Very!” Pentangelo said. “And very nervous. We’ll just try to do our best at it, and who knows? Maybe we can go to the World Championship if we try hard enough.”

The VEX Robotics World Championship is in April. Perhaps the Bionic Panther Pups will be in attendance...