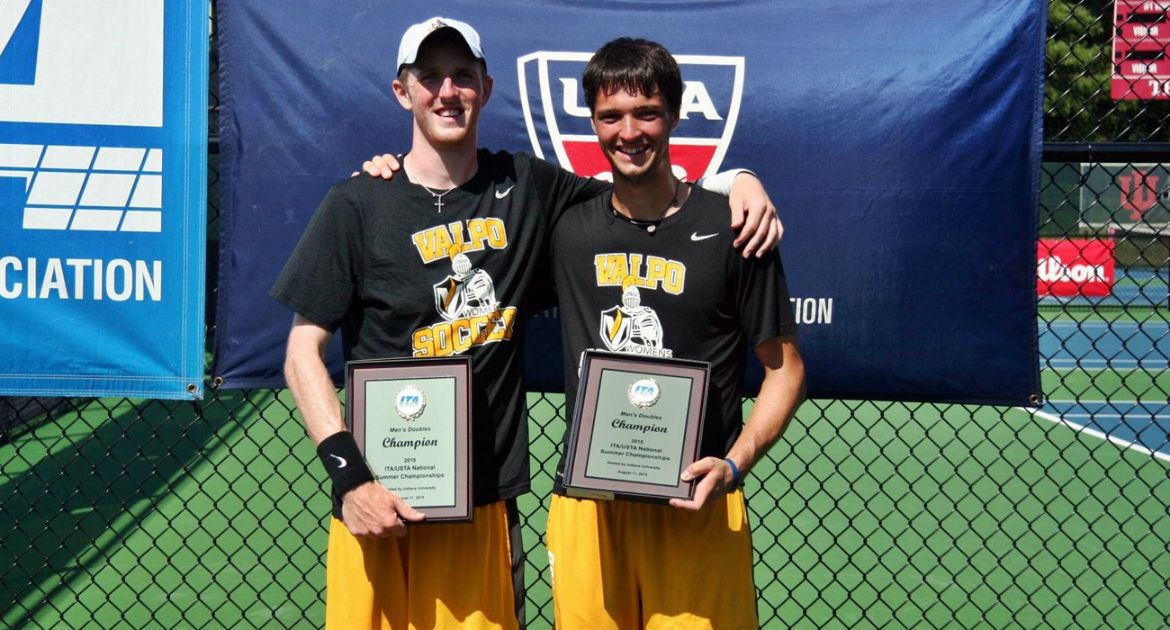 Valparaiso men’s tennis juniors Charlie Emhardt (Carmel, Ind./Carmel) and Jeffrey Schorsch (Perrysburg, Ohio) capped off successful summers of competition by winning the men’s doubles draw at the ITA National Collegiate Summer Championships in Bloomington, Ind. With the victory, the pair earns a spot in the main draw [top 32 teams in the nation] at the ITA All-American Championships in Tulsa, Okla. this October. In addition, Schorsch finished as the runner-up in the men’s singles draw as well.

Emhardt and Schorsch, who were unseeded in the 64-team bracket as eight pairs earned seeds, had a bye in the first round before cruising to an 8-1 win in second-round action and winning 8-4 in round of 16 action. The pair then ran into their first of three seeded opponents in the quarterfinals, the fourth-seeded team of Dusty Boyer – a two-time First Team All-Big Ten honoree – and his younger brother, Toby Boyer. That would prove no problem for the Valpo pair, however, as they advanced to the semis with an 8-5 win.

The semifinal matchup pitted Emhardt and Schorsch against the bracket’s top-seeded squad – the Texas duo of Nick Naumann and Julian Zlobinsky. Again, the Crusaders were up to the task, taking down the Longhorn pair by an 8-6 final to advance to the championship match. The title match saw the Valpo team face the third-seeded team of Kentucky’s Trey Yates and Georgia Tech’s Michael Kay, and the Crusaders took them down with ease, earning the 8-3 win to capture the tournament title.

Schorsch also had a successful run in singles play, advancing all the way to the tournament final before finally suffering defeat. The junior won his first three matches in straight sets before taking down Notre Dame’s Alex Lebedev in three sets in the round of 16 and defeating another Irish player, Alex Lawson, in the quarterfinals in straight sets. Schorsch went on to beat fourth-seeded Becker O’Shaughnessey, a two-time All-SEC honoree at Alabama, in three sets in the semifinals before finally succumbing to the Crimson Tide’s Korey Lovett, Alabama’s primary no. 1 singles player, in the finals in three sets.

With the title match appearance in the singles draw, Schorsch earns a spot in the singles qualifying draw (top 128 players in the nation) of the ITA All-American Championships in October. Emhardt competed in the singles championship as well in Bloomington, winning his first two matches – including a straight-set win over Arkansas’ William Albanese - before falling to Kay, ranked fifth in the singles draw - in a hard-fought match.