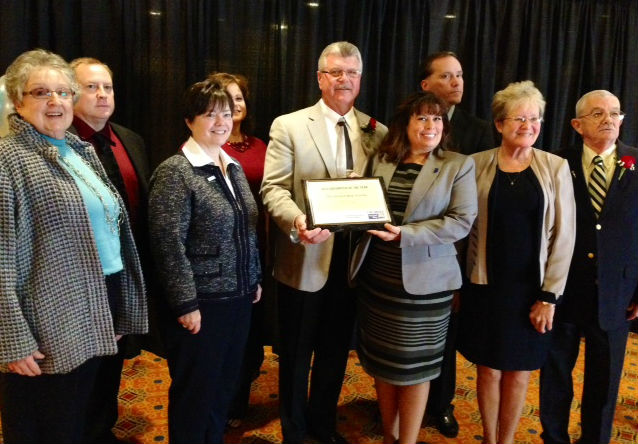 James Stemmler, of Michigan City, was presented with the prestigious national Joseph A. Beirne Community Services Award for his longtime work with United Way and the labor community in La Porte County. The award was presented at the Indiana Association of United Ways State Leaders Conference on March 13 in Indianapolis.

United Way of America created the Joseph A. Beirne Award in 1974 to recognize outstanding labor leaders for service to their community. Stemmler joins a long roster of national and local union volunteers who have been recognized over the past 40 years, and is only the second recipient from Indiana.

Stemmler has spent more than 20 years leading labor volunteers in community improvement. He initiated the Union Workers Street Collection for United Way in 2007, when he invited four trade unions to volunteer. During the most recent event, 20 union volunteers raised more than $3,100 in four hours. The annual collection gives United Way visibility in the community and an opportunity to engage individuals outside of the annual workplace campaign.

Stemmler helped create the United Way Dodgeball Challenge, a fundraising event that engages community businesses and organizations in spirited competition. He currently serves on the United Way of LaPorte County Board of Directors and has been a regular member of the Allocations Committee.

“Jim has a deep passion for causes and organizations he cares about and is a leader who inspires others to become more engaged,” said Kris Pate, executive director of United Way. “He’s always looking for ways to serve those in need and our organization has benefited greatly from his leadership.”

A Vietnam veteran, Stemmler is commander of the La Porte Veterans of Foreign Wars #1130 and is a member of the Wall Gang, a veteran’s service organization. He has volunteered as a tutor and mentor for young children at Hailmann Elementary School and as a mentor for troubled teens at Barker Middle School.

Stemmler began a successful career with Ironworkers local #395, based in Hammond, in 1972. He held positions as trustee, recording secretary and president before serving as business agent for 17 years. He is past-president of the La Porte County Building Trades Council, an affiliate of the Northwest Indiana Federation of Labor, AFL-CIO. As chair of the board of directors for the Ironworkers Pension Fund and chair of the Health and Welfare Fund, he reached a large community of union members.

The Beirne Award was presented by Nancy I. McCormick, AFL-CIO/CSL Midwest Regional Director for United Way Worldwide. She said, “Members of organized labor have always heeded a call to engage in their communities as productive citizens with good jobs. Because of Jim Stemmler, United Way and many other organizations are better served.”