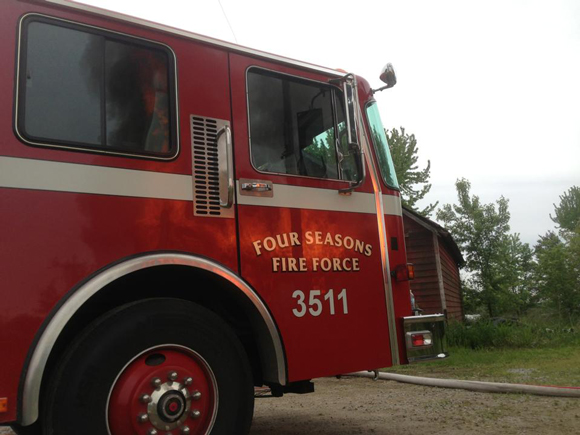 Lakes of the Four Seasons Volunteer Fire Force will be running their 6th Annual Stop, Drop and Donate the next two weekends. The program was born in December of 2008 during the Christmas Season when our Fire Chief received a call that one of our local pantries was almost empty. So we decided to run the fire trucks on two Saturday's that December, through the Porter County section of LOFS and the following Saturday in the Lake County section. We advertised with flyers and in the papers.

Firemen and auxiliary members with some of their children showed up, bundled to the limit. We even brought one of Santa's helpers with us. Weather was not going to be a factor, we ran sirens, horns, bells, and loud speakers. We didn't knock on any doors, we just let you know that we were there.

You greeted us with food and money and chased us down if we missed you. The outpouring of the community was so warming that the chill in the air just disappeared. Not only did we fill a truck full of food, but we accepted cash donations which we used to purchase cases of additional food. The township trustees were speechless when we showed up with a fire truck and an SUV loaded to its limits of food for the families in need that holiday season.

People who wish to donate can simply leave their donated items in a bag at the end of their driveway, or can donate cash to the firefighters as we are walking around the subdivisions that day with our firetrucks. If we are not coming to your subdivision or you aren't going to be home, items can also be dropped off the day of the event at either Fire Station, or can be dropped off prior to the event of after the event at our station located at 10645 Randolph Street, On the east side of the building at the red door. All donations will benefit the less fortunate families from the local communities.