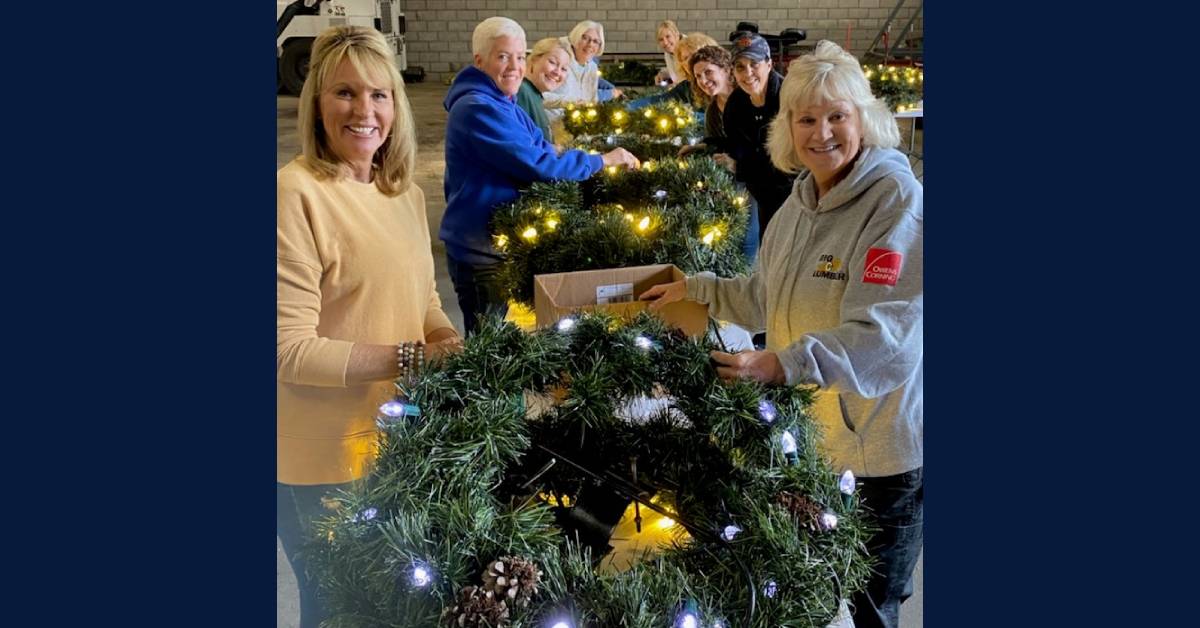 If you’ve driven by or strolled around La Porte’s bustling downtown area, you may have noticed a few additions to the city’s typical holiday decor. The colors of gold and silver sparkle on Lincolnway with ornaments, wreaths, and lights in addition to the glittering tree topper perfecting the city tree that is donated every year. Thanks to the coordination of city councilwoman Laura Cutler and multiple departments within the City of La Porte, a number of people have made this merry makeover possible.

According to Cutler, the conversation about upgrading the city’s decorations began a few years ago within the city council.

“About two years ago, the business improvement district board really started talking about how the downtown Christmas light display needed to be addressed,” Cutler said.

In previous years, 'The Boy Scout Troop 396' located in La Porte, would decorate the trees up and down Lincolnway with dazzling lights. Unfortunately, the city started to see a pattern each year that was disrupting the flow of the decor.

“Over time, those trees changed in size, some were taken out, and the electric boxes at the bases of the trees would break when the snowplows would come through,” Cutler said.

In the spring of 2021, the board started curating a new plan to adorn the downtown for the 2021 holiday season that would include new items as well as renovations to some older ones. Cutler’s goal was to reflect the historical elements of the city and incorporate some contemporary elements, too.

“I had been doing some research about different lighting scenarios and looking at the fact that we would need to fundraise,” she said.

After the city council’s August meeting, Cutler gathered a group of volunteers to help her start the festive project.

“We started refurbishing the wreaths, which lasted two whole days. We took all the bows off and put matching white lights on every wreath,” she said.

Cutler teamed up with a handful of the city’s divisions, like the Engineering Department, to ensure that the new lighting plan would work flawlessly. This included the city’s lampposts instead of outlets by the trees.

“We wanted to go with a very warm, golden light that was elegant and would draw people through the downtown,” she said.

In addition, the lights, and wreaths this year, the Christmas tree, annually donated by the 'American Licorice Company', is dressed in large golden ornaments garnished by white lights and a dazzling snowflake tree topper. Located at the corner of 'Plaza 618', the 22-foot tree is accompanied by smaller trees lit up with matching white lights.

“Now, we have a downtown display that has snowflakes running through town, leading to the Plaza, which has golden balls and a snowflake on top. The side streets have the wreaths we traditionally have, but we’ve been adding golden or silver bows,” she said.

Cutler tells the residents of La Porte to keep their eyes peeled for even more new decorations to come next season, as some of them are already making their way to the city.

“We have some decor in storage now as part of this downtown decor,” she said. “We hope people see this as phase one.”

This project would not have been possible without the help of the urban enterprise board, business improvement district board, redevelopment commission, American Licorice Company, parks department, street department, Civic Auditorium, and many others in and around La Porte, according to Cutler. She also thanks her husband, Thaddeus Cutler, her group of volunteers, the Boy Scouts for all their hard work.

To learn more about the City of La Porte and its projects, visit their website here.