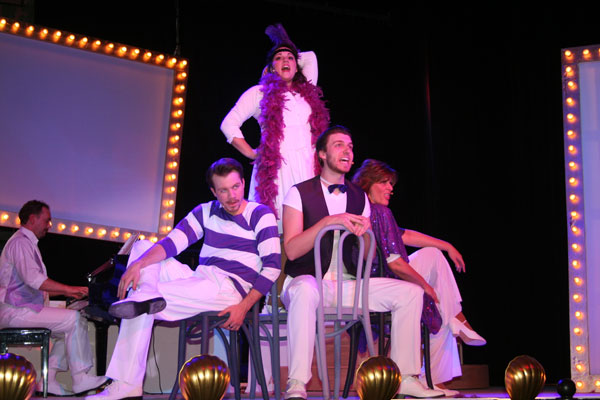 The cast and production team of the Memorial Opera House production of The Musical of Musicals, The Musical will conduct a “Talkback with the actors” with the audience after their Saturday, February 19th 8pm. Performance.

“Immediately following the Saturday night show actors and production team will take the stage for a “Talkback” where the audience has the opportunity to ask the cast and crew questions about the show.” Says Brian Schafer, Executive Producer and Business Director at the Memorial Opera House. “We value the opinion of our audience and feel this is a great opportunity for them to interact with the actors and production team and ask their questions and more importantly get the answers directly from the cast.”

Saturday night performance will feature the show, The Musical of Musicals (The Musical!) is a musical about musicals! In this hilarious satire of musical theatre, one story becomes five delightful musicals, each written in the distinctive style of a different master of the form, from Rodgers and Hammerstein to Stephen Sondheim. The basic plot: June is an ingenue who can’t pay the rent and is threatened by her evil landlord. Will the handsome leading man come to the rescue? The musicals are presented in the style of: a Rodgers & Hammerstein version, set in Kansas in August, complete with a dream ballet; a Sondheim version, featuring the landlord as a tortured artistic genius who slashes the throats of his tenants in revenge for not appreciating his work; a Jerry Herman version, as a splashy star vehicle; an Andrew Lloyd Webber version, a rock musical with themes borrowed from Puccini; and a Kander & Ebb version, set in a speakeasy in Chicago. This comic valentine to musical theater was the longest running show in the York Theatre Company’s 35-year history before moving to Off-Broadway.

The Musical of Musical features four talented actors, Molly Mullins, Zachary Gipson, Tony Serra and Michele Craig. All who have performed on the Memorial Opera House stage. It also features the musical talent of Chris Stalbaum at the piano and as Musical Director. Musical of Musical the Musical is directed by Kurt Gillins.

Text PTMOHLIVE to 79338 for special ticket offers and don’t forget to be a Friend of the Memorial Opera House on Facebook.

Tickets are available through the Memorial Opera House Box Office, by phone at 219-548-9137, or in person. The Memorial Opera House is located at 104 Indiana Avenue, Valparaiso, IN. Box office hours: Monday-Wednesday & Saturdays 10:00 am - 2:00 pm. Thursday and Friday 10:00 am – 6:00 pm. You may also visit our website at www.mohlive.com to purchase individual tickets.