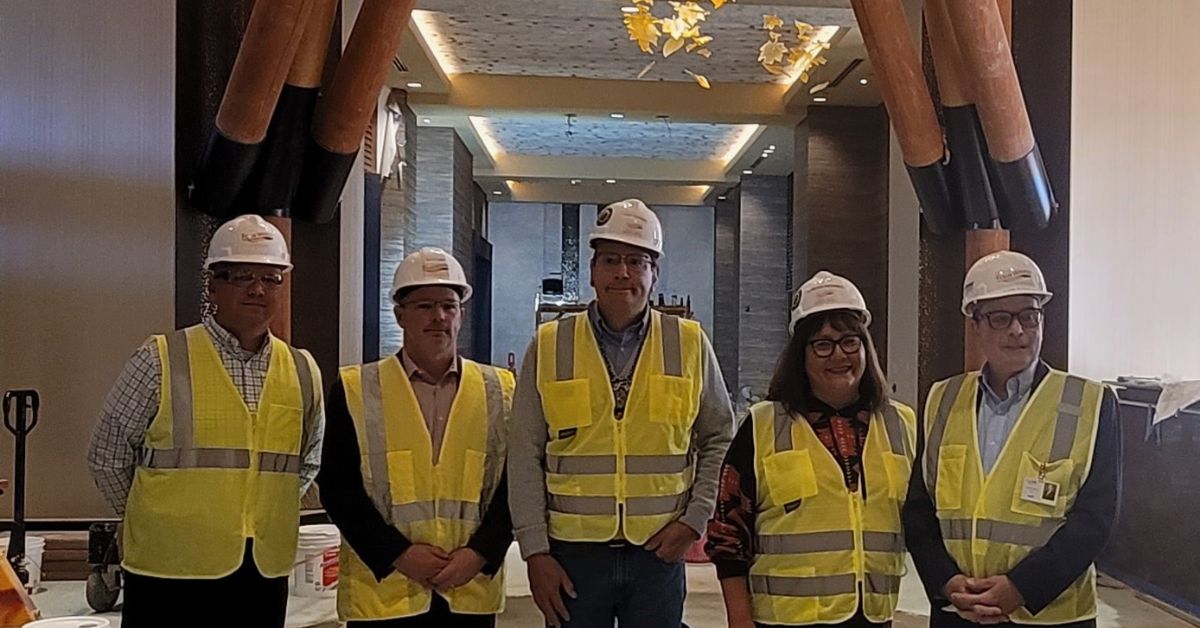 The Pokagon Band of Potawatomi Indians and its Four Winds® Casinos provided the media with a private tour today to view the progress of construction at Four Winds South Bend.  An expansion of the casino resort is underway and the expanded gaming floor was unveiled on August 18 which now spans more than 98,000 square feet and includes 1,900 slot machines, 27 table games, a new high limit area, an additional cage and cashier area.  Slated for completion in the first quarter of 2023, additional amenities of Four Winds South Bend will include a 23-story hotel tower with 317 rooms, including 83 suites.  There will also be a spa, convention area, meeting space, a ballroom, lounge, bar & grille, an outdoor third floor swimming pool, and terraces with spectacular views.

Frank Freedman, Chief Operating Officer of Four Winds Casinos provided the tour and highlighted the expansion by making stops at several areas of the expansion including the newly named Cedar Spa, which will offer a variety of traditional and unique spa therapies including steam rooms, saunas, and vitality pools as well as separate lounges for women and men.  Cedar Spa will also offer a couples suite, facials, body treatments, massage services and more.  More details on experiences and services as well as treatment packages will be announced at the time of opening.

Commenting on the progress of construction, Frank Freedman, Chief Operating Officer of Four Winds Casinos said, “With much of the exterior work now complete, we are excited to focus our attention to the interior features and finishes that our guests will enjoy as part of their overall entertainment experience at Four Winds South Bend.  We are also excited to provide some initial details on Cedar Spa, which we believe will be a very  attractive amenity.  We hope the South Bend community shares in our excitement as we prepare for the unveiling early next year.”

Rebecca Richards, Tribal Chairwoman of the Pokagon Band of Potawatomi added, “We are thrilled to see many of the new interior features of Four Winds South Bend take shape as we near the final phases of construction.  We appreciate all of the hard work from our casino operations team, project manager, general contractors, construction workers and vendors to keep the project moving forward.  The completed casino resort is going to be spectacular!”

The tour also previewed enclosed spaces including the hotel tower as well as Ribbon Town Conference and Event Center, which is a 24,000 square foot multi-use facility which has 16 meeting rooms, a ballroom with seating for 600, two pre-function bar areas, a business center, and outdoor pre-function space.  The convention area features a ballroom and meeting space, a cafe, an outdoor swimming pool, and terraces with spectacular views.  In addition to hosting large meetings, conferences, banquets and special events, Ribbon Town will accommodate concerts and live performances.

To reserve space and learn more about Ribbon Town Conference and Event Center, please contact Timothy Adams, Director of Sales and Catering at (269) 926-5216 or timadams@fourwindscasino.com.

If you would like to follow the progress of the expansion of Four Winds South Bend, you can do so by accessing the construction camera on the Four Winds Casinos website or by using the following link:  https://app.oxblue.com/open/wilhelm/fourwinds.

The Pokagon Band of Potawatomi’s sovereignty was reaffirmed under legislation signed into law by President Clinton in September of 1994.  The Pokagon Band is dedicated to providing community development initiatives such as housing, education, family services, medical care and cultural preservation for its more than 5,900 citizens.  The Pokagon Band’s ten-county service area includes four counties in Southwestern Michigan and six in Northern Indiana.  Its main administrative offices are located in Dowagiac, Mich., with a satellite office in South Bend, Ind.  In 2007, it opened Four Winds Casino Resort in New Buffalo, Mich., followed by Four Winds Hartford in 2011, Four Winds Dowagiac in 2013 and Four Winds South Bend in January 2018.  The Pokagon Band operates a variety of businesses via Mno-Bmadsen, its non-gaming investment enterprise.  More information is available at www.pokagonband-nsn.gov, www.fourwindscasino.com and www.mno-bmadsen.com.