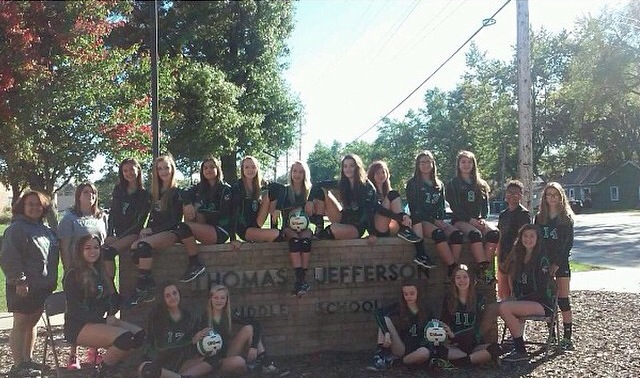 The Thomas Jefferson Middle School 8th grade volleyball team ended the season with a 7-4 record, coached by Kandel Baxter, German teacher at TJMS and BFMS. A highlight for the team was their 4th place finish at the Dunes Middle School Invitational. On Tuesday, October 21st the girls celebrated their victorious season with a banquet for the team and their families. The following players were given awards at the banquet; Maya Pathaga for most improved, Rachel Vendl for mental attitude and Jacklyn Bontrager for most valuable player. Vendl led the team in assists, Cami Clark and Jacklyn Bontrager led the team in passing and defense and Bontrager with kills, blocks and aces. Overall TJMS had a great season and are looking forward to playing in together in the future.