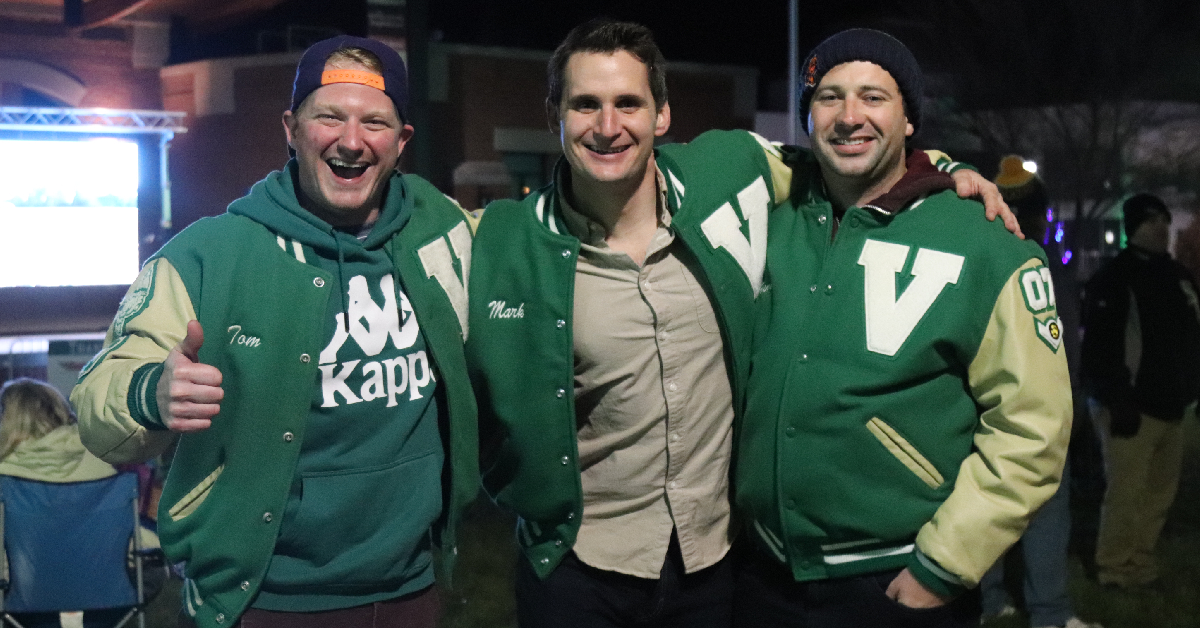 This Friday the Valparaiso Vikings took to the field at Lucas Oil Stadium for one more round of Friday night football and a shot at the 2019 IHSAA 5A State title. While a caravan of family and friends followed the Vikings to Indianapolis, another group of supporters gathered at the Porter Health Amphitheater in downtown Valpo to watch the live stream from right here in the Region. Mac McElhaney was among the crowd of fans braving the elements to show their Viking spirit.

“We’re out here to support the guys; we’ve been to the last two games and we’re extremely excited to see Valpo at a state championship,” McElhaney said. “We couldn’t make the drive down to Indy, but thought it’d be nice to come out and support them from the bleachers.”

Lawn chairs in tow and hot chocolates in hand, the cold weather was no match for the wave of supporters that came to witness the Vikings’ first appearance at state since 2001, a game Debbie and Charlie Kamp remember well.

“We first saw them go to state when our son played on the team back in 2001,” Kamp said. “Unfortunately, we lost then, but we’ve been coming to games since then, supporting the team through the years.”

This year was no different. The Kamps have continued their unwavering support for the Vikings with a little extra good luck charm of their own: wearing the same outfits to every game they attended.

“They just kept winning and winning and winning, and we didn’t want to give them any bad mojo, so we decided to keep wearing our same stuff every time,” Kamp continued. “They’ve been doing so well; we couldn’t be happier to be rooting for our boys. This year they really are the dream team!”

Freshmen Destiny White and Laniyah Thompson and sophomore Olivia Brinson were among several Valpo students who came out to watch their team play.

“We’re close with a lot of people on the team,” Brinson said. “They’re our good friends so we definitely wanted to make sure to watch and support them and hope they win.”

“We wanted to come out and support no matter what,” White added. “It’s actually really cool that they’re putting this viewing on here and giving us a chance to get together and see it happen.”

Isaak Schuitema, a member of the freshman football team at Valpo, was also among the fans, and attested to the grit and sacrifice his fellow football players have put into the season.

“They’ve worked so hard, it’s unbelievable how much they practice every day,” Schuitema said. “I’m just glad to see them get this reward for their hard work.”

The game began with an intense first half, keeping fans on the edge of their lawn chairs as the Vikings trailed by a touchdown before tying things up before the half.

“Seeing them tie it up was amazing,” McElhaney continued. “This is a highly ranked team they’re up against, and former state champions as well, so I think they did an excellent job of stepping up to the challenge.”

The Vikings fought hard in the second half, coming back from a 17-point deficit to get 20 points under their belt and came within seven points of once again tying the game. Unfortunately, time was not on their side; the clock ran out before the Vikings could secure another touchdown, ending the game with a final score of 27-20 in favor of New Palestine. Regardless of the final outcome, the Vikings made history just by stepping on the field, and the entire Region is proud to call them state runners up.

“Scoreboard aside, I am so proud of this team,” said Valpo alumni Paul Jaskowiak. “We haven’t seen this since 2001, and they earned their place on that field tonight. I couldn’t be happier for them, and I’m so glad I came out to support them here tonight.”