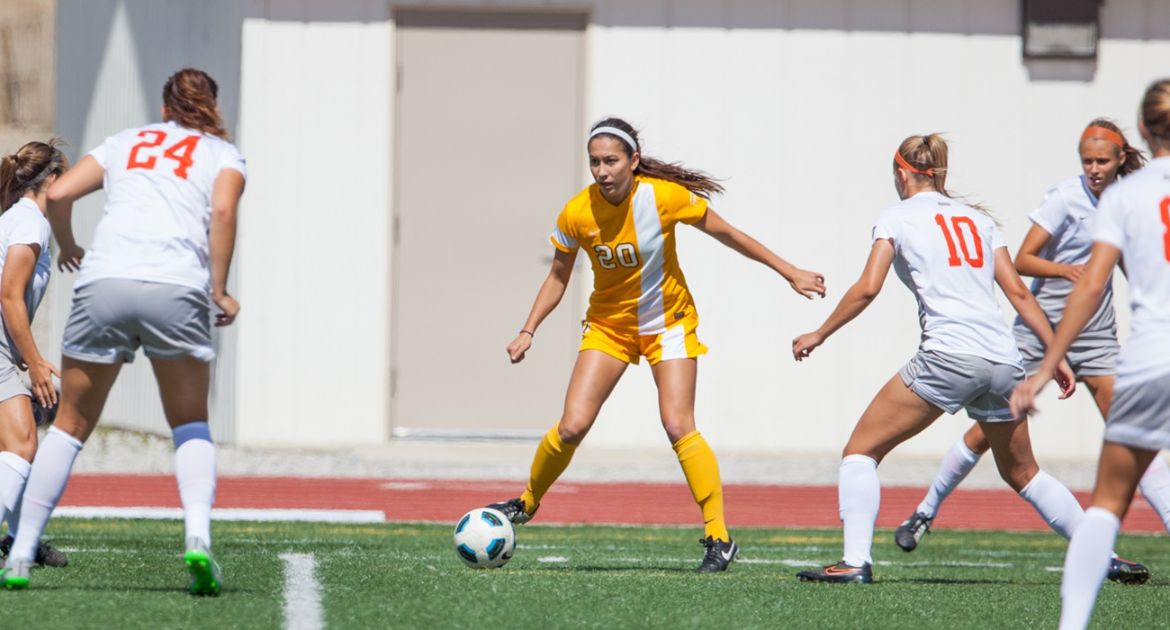 Crusaders Drop Season Opener at IUPUI
The Valparaiso University women’s soccer team kicked off the 2016 regular season on Friday at IUPUI, but after waiting out a pre-game weather delay of over an hour, the Crusaders fell to the Jaguars by a 2-0 final.

Thoughts From Head Coach John Marovich
“We had a really good start tonight for about 25 minutes, but weren’t able to get a reward for our movement and combinations. I was pleased with our defensive shape and our ability to win balls in the midfield, but after the goal on the counter, it caused us to have to chase the game.”

“We need to improve in our defending and decision making while dealing with counter attacks, but I like our attitude to press. These games give us great feedback to grow as a unit. We created several very dangerous opportunities in the second half by playing more direct, so I am encouraged that we can do different things with this group when needed.”

Next Up
The Crusaders continue their opening weekend of play on the road as they head to Bowling Green, Ohio to take on Bowling Green Sunday afternoon. Kickoff is scheduled for noon CT, with live stats available via ValpoAthletics.com.

Late Goal Sends Crusaders to Defeat At BGSU
The Valparaiso University women’s soccer team concluded a brief two-match road trip to kick off the 2016 season Sunday afternoon, falling at Bowling Green 1-0 as the Falcons scored in the 82nd minute.

Thoughts From Head Coach John Marovich
“The way the game started, it gave us an opportunity to look at a few things in a different shape. These games, at this time of year, provide us with situations that will help us mold and shape this young squad.”

“I was pleased with the energy and the way our squad competed in the second half. We found our rhythm and ability to keep pressure with our shape and defensive intensity. Although the attacking third has been a challenge this weekend, it is providing us with valuable lessons to the type of attacking patterns which will work for our group of players.”

“I felt that Kelsey Jahn was a warrior for us today. She played the full 90 minutes and rose to the challenge in the holding midfield role for us.”

Next Up
The Crusaders (0-2-0) return home for the first time in the regular season Friday evening, as they get set to host New Mexico State at 7:30 p.m. The game can be seen live on ESPN3, WatchESPN and the ESPN app, with live stats also available via ValpoAthletics.com.

The Crusaders open the season Sept. 3 at the Notre Dame Kickoff Challenge before returning home to host the Crusader Collegiate the next week. It marks the first time the Valpo men’s golf program has hosted a tournament at Sand Creek C.C., and is the first home event of any sort for the Crusaders since Valpo welcomed Chicago State for a dual match at The Course at Aberdeen in 2009.

The slate continues for Valpo Sept. 11-13 at the Golfweek Program Challenge in Pawley’s Island, S.C. The Crusaders will then compete in tournaments at Colorado State (Sept. 19-20), Marquette (Oct. 2-3) and Dayton (Oct. 17-18) to conclude the fall portion of their schedule.

The team gets an early start to the spring portion of the slate, opening Feb. 20-21 at The Invitational at Savannah Harbor. The Crusaders compete at the Bash at the Beach Mar. 13-14 and head to tournaments hosted by Missouri State (Mar. 20-21), Indiana (Apr. 1-2), Wright State (Apr. 3-4) and Ball State (Apr. 14-15) before traveling to Howey-in-the-Hills, Fla. for the 2017 Horizon League Championship, contested this season on Apr. 23-25.