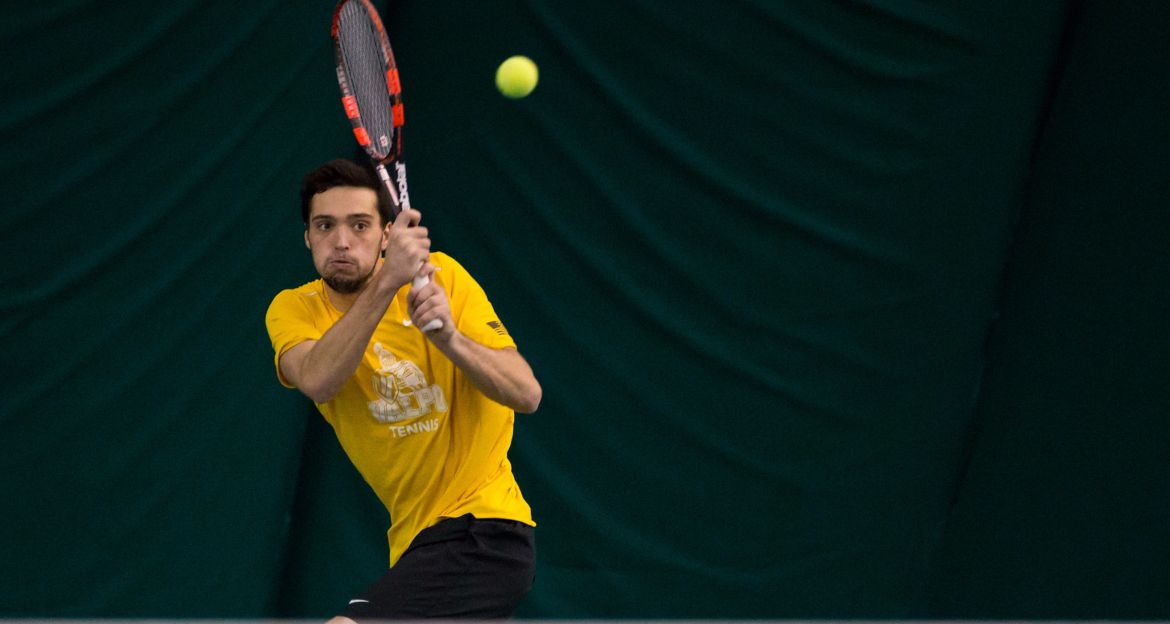 Men’s Tennis Extends Winning Streak to Seven
The location changed, but the results remained the same for the red hot Valparaiso University men’s tennis team on Sunday morning. The Crusaders opened their spring trip in Orlando, Fla. by rolling past Rollins College 6-1 to run their winning streak to seven and boost their record to 8-1.

Next Up
The Crusaders will continue play in Florida on Monday as they face Mount Saint Mary’s and Grand Valley State. Both matches are slated to occur in Kissimmee, Fla.

Next Up
The Crusaders will remain in the Sunshine State and next take the field on Tuesday at 2 p.m. CT against Pennsylvania in Port St. Lucie, Fla. Live coverage links will be available on ValpoAthletics.com.

Bradley Bests Valpo in Women’s Tennis
The Valparaiso University women’s tennis team fell to Bradley 7-0 on Sunday afternoon in Peoria, Ill. The Braves upped their record to 7-4, while the Crusaders fell to 0-8 this season.

Next Up
The Crusaders head to California for spring break. The first match of the trip is slated to occur at 5 p.m. CT on Friday, as Valpo takes on California Lutheran.

Softball Claims Wild Win Over Stony Brook
The Valparaiso University softball team came out of a topsy-turvy battle with Stony Brook on Sunday morning in Nashville, Tenn. right-side up, as the Crusaders held off one final rally from the Seawolves to earn a 10-9 victory in their finale at the Purple/Gold Challenge.

Next Up
The Crusaders (6-2) will face one of the nation’s most successful programs in midweek action on Wednesday, as Valpo travels to Tuscaloosa to take on #9/11 Alabama. The game will be broadcast live on the SEC Network+, with Eli Gold and Danae Hays on the call, and can also be seen live on ESPN3, Watch ESPN and the ESPN app. Links for the live video, as well as live stats, will be available via ValpoAthletics.com.

Crusaders Fall Twice on Saturday
The Valparaiso University softball team came out on the wrong end of a pair of decisions for the first time this season on Saturday at the Purple/Gold Challenge in Nashville, Tenn, falling to host Lipscomb, 7-0, and to Eastern Illinois, 12-5.

How It Happened – Lipscomb

How It Happened – Eastern Illinois

Next Up
The Crusaders (5-2) look to close out the weekend on a winning note as they take on Stony Brook at 10 a.m. Live stats will be available via ValpoAthletics.com.

Next Up
The Crusaders (40-43) return to action at Vanderbilt’s Columbia 300 Music City Classic on Friday, March 17.

Women’s Tennis Falls to Akron
The Valparaiso University women’s tennis team suffered a 7-0 loss to Akron at the Courts of NWI on Friday evening. The match featured two competitive doubles showdowns and one three-set singles affair.

Next Up
The Crusaders (0-7) will visit Bradley on Sunday at 3 p.m. This will be the final match before they head to California for their annual spring trip.

Late Comeback Lifts Crusaders to Third Straight Win
The Valparaiso University baseball team continued its strong start to the season on Saturday in Jacksonville, Fla., putting together some late-inning drama for the second consecutive contest. Valpo trailed 2-1 as late as the eighth inning, but scored a run in the eighth and three more in the ninth to beat the host Dolphins 5-2.

Next Up
The Crusaders and Dolphins will round out the three-game series on Sunday at noon CT as Grant Inman pitches against Casey Kulina. Live stats and audio will be available courtesy of Jacksonville Athletics. Links to the live coverage can be found on ValpoAthletics.com.

Women’s Basketball Season Concludes with Loss to Top-Seeded Green Bay
After notching a first-round win on Friday, the Valparaiso University women’s basketball team ran into the top-seeded Green Bay Phoenix on Saturday afternoon, an 89-60 defeat in the Horizon League Quarterfinals. Valpo finished the year winning four of its last seven and three of its last five. The Crusaders are expected to bring back 92.1 percent of their regular season scoring for the 2017-18 season.

Crusaders Start Weekend with Extra-Inning Win over Jacksonville
The Valparaiso University baseball team started its spring trip in style on Friday evening in Jacksonville, Fla., prevailing 6-3 in a 10-inning contest. The Crusaders have won back-to-back games, including Friday’s win over an Atlantic Sun contender and strong warm-weather foe.

Next Up
The Crusaders and Dolphins will go at it in Game 2 of the series on Saturday at 1 p.m. CT. Wes Gordon gets the ball for the Crusaders, while lefty Casey Kulina is slated to get the nod for Jacksonville. Links to live audio and stats are available on ValpoAthletics.com.

Crusaders Defeat Stony Brook, Set Mark For Best Start
The Valparaiso University softball team is 5-0 for the first time in program history as the Crusaders opened the Purple/Gold Challenge in Nashville, Tenn. on Friday with a 4-1 victory over Stony Brook. Senior Sam Stewart (Frankfort, Ill./Lincoln-Way East) continued her hot start to the season at the plate, while sophomore Jaymee Lawton (Goodyear, Ariz./Desert Edge [Utah Valley]) tied a program single-game record in the field.

Next Up
The Crusaders (5-0) look to extend their unbeaten start with a pair of games on Saturday. Valpo will face host Lipscomb at 12:30 p.m. before taking on Eastern Illinois at 5:30 p.m. Live stats for both games will be available via ValpoAthletics.com.

Crusaders Pull Away From Penguins, Advance to Horizon League Quarterfinals
When the stakes were the highest, the Valparaiso University women’s basketball team came through with one of its best performances of the season on Friday afternoon. The ninth-seeded Crusaders dispatched eighth-seeded Youngstown State 79-62, extending their season at least another day and advancing to the quarterfinals of the Horizon League Tournament at Joe Louis Arena in Detroit. The Crusaders received contributions from up and down the roster while compiling a shooting percentage of 49.3 and pulling down an eye-popping 52 rebounds against Youngstown State’s 26.

Next Up
Valpo will have no choice but to embrace the role of underdog as it faces top-seeded Green Bay (24-5, 15-3 Horizon) on Saturday at 10:30 a.m. CT. The Phoenix, a yearly Horizon League powerhouse, will be playing their first game of the tournament after earning a first-round bye. The game can be seen on ESPN3 with Andy Masur (play-by-play) and Kelley Deyo (color commentary). The hometown call is available on 95.1 FM Valparaiso with David Horak (play-by-play) and Renee’ Turpa (color commentary). Links to live video, audio and stats will be available on ValpoAthletics.com.

Bowling Earns Win Over Nation’s Top Team Friday at Nebraska
With former Valparaiso University president Dr. Alan Harre and his wife, Diane, in attendance Friday, the #25 Crusader bowling team posted a 3-1 record in action at the Big Red Invitational in Lincoln, Neb., including a victory over the nation’s top-ranked team.

Next Up
The Crusaders (40-41) close out the Big Red Invitational on Saturday from Lincoln. Action is slated to begin at 8:25 a.m.