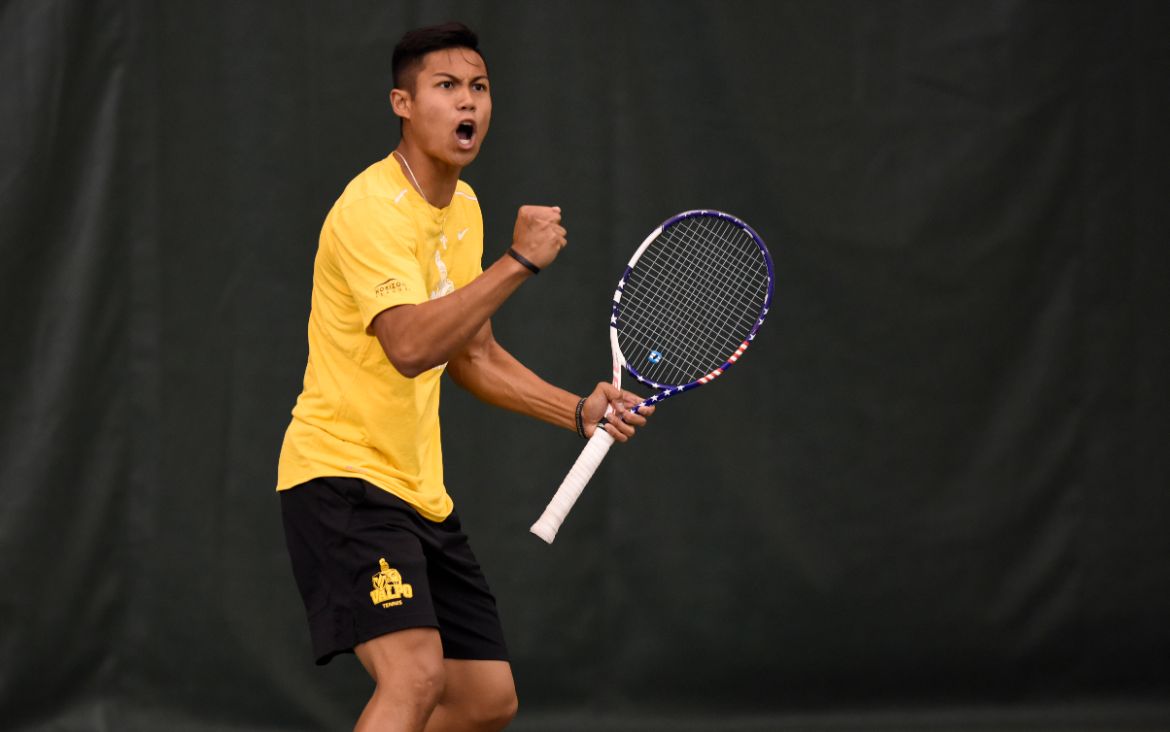 Valpo Ready for Second Straight NCAA Tournament Appearance
The Valparaiso University men’s tennis made sure to enjoy its second consecutive Horizon League title and clinching an automatic berth in the NCAA Tournament after doing so for the first time in program history a year ago.

After all, the Crusaders have plenty of reasons to beam with pride – from sending their No. 1 doubles team to the ITA National Indoor Championship in the fall to finishing undefeated in regular season league play for the second straight year, and everything in between.

But the feeling surrounding the team is different entering the NCAA Tournament this time around. The Crusaders have been there before, they’re not satisfied and above all they know they must win on Friday to extend the careers of the four-member senior class that has helped turn the program around.

“It’s win or go home now,” senior Kyle Dunn said. “I don’t have a future of playing tennis after college. Every match could be my last competitive match. We’re going to put everything on the line. We know there’s no reason to hold back. We’re going to give 100 percent every time we go on the court.”

The Crusaders (23-3, 7-0 Horizon) are set for a first-round date with Big Ten foe Michigan, a team that finished the year at 22-6 overall and 10-2 in conference play. The Friday match begins at 1 p.m. CT with links to live scoring and video available on ValpoAthletics.com. If the Crusaders can get past the Wolverines, they’ll face the winner of Idaho and No. 16 Stanford on Saturday.

The current Valpo seniors – Dunn, Jeffrey Schorsch, Charlie Emhardt and Dave Bacalla – are statistically the four best players to ever compete in men’s tennis at Valparaiso University. They took the program to new heights as freshmen, then they did it again. And again. And again.

Valpo has already shattered the team’s season win total for the fourth consecutive year. That’s not the only record that has fallen, as the quartet of seniors rank one through four in program history in career singles and doubles wins. Schorsch is the program recordholder in career singles wins with 111, while Emhardt’s 114 career doubles wins is the all-time Valpo watermark.

There are many other numbers that can be used to quantify the success of Valpo men’s tennis, but to 2017 Horizon League Coach of the Year Jim Daugherty, none of the statistics define his program. It’s something much larger than that.

“It’s family,” Daugherty said. “They talk about it all the time. The camaraderie of these players is special. I don’t think there’s any stronger force. It’s about the energy that goes into it. They’re willing to run through a wall for each other and do anything to help their teammates. Right down to the last guy who’s not getting a lot of play, they’re out there supporting each other 100 percent. That’s the kind of glue that creates the energy where we go forward.”

Schorsch, who just became the first player in the history of the Horizon League to win the league’s Player of the Year Award outright three straight seasons, will play No. 1 singles on Friday. He went 21-1 in dual matches this spring with all 21 victories coming in straight sets.

At No. 2 singles, it’s Chad Kissell, the sophomore among seniors at the top of Valpo’s lineup. He enters postseason play at 21-11 overall and 14-8 in dual matches.

“These seniors have done everything for our program,” Kissell said. “For that reason, I try to go out there and do everything I can do, too, because I know how much work they’ve put in for our team.”

Emhardt and Bacalla have bounced back and forth between No. 3 and No. 4 this season. On Friday, it’ll be Emhardt in the No. 3 singles slot and Bacalla competing at No. 4. Both seniors have captured all-league accolades over the course of their careers, with Emhardt achieving second-team status this season. Emhardt won at No. 4 singles in last year’s NCAA Tournament match against Northwestern, making Valpo the first Horizon League team to avoid a shutout in the NCAA Tournament since 1994.

The hero of both Horizon League Tournament matches is Dunn, who plays No. 5 singles. After nailing down the clinching match of a 4-3 win over Youngstown State in the league semifinal, he repeated his magic a day later in a 4-3 win over Cleveland State in the league championship. The match went as far as it could go, with the league title and automatic berth in the NCAA Tournament coming down to a tiebreak in the third set of Dunn’s match.

“I relish the opportunity to be there and to be able to shoulder the load for our guys and those opportunities,” Dunn said. “I’m confident in those spots, even though there’s a ton of pressure. I enjoy shouldering that responsibility, and we’ll see if it happens again in the NCAA Tournament.”

Freshman Brandon Ancona will play No. 6 singles, carrying with him a 23-10 overall mark and 16-5 dual record during a solid rookie campaign.

The answer to the biggest question about Valpo’s lineup for Friday’s match is yes. Schorsch and Emhardt, who have been ranked as high as eighth nationally, will be back together at No. 1 doubles after being split up for a number of recent matches. Bacalla and Kissell will play No. 2 doubles, and junior Garrett Gardner will join Dunn at No. 3.

“We know most of Michigan’s guys pretty well,” Dunn said. “At the ITA Regionals this past fall, we played some of their doubles teams. I personally know some of the guys from the Midwest from juniors. We know their games pretty well, and we feel like we’ve got a good shot against them.”

Friday’s match will be held at Stanford’s Taube Tennis Center, a historic 3,500-seat venue that has gone through many renovations and additions over the years after originally being built in 1926.

“The guys revel at being on these big stages,” Daugherty said. “I don’t think they’ll have any awe factor going into it. They really like this kind of setting. It’s going to bring out the best in them.”

The prestigious honor is given to 10 Division-I athletes in the district (Indiana, Illinois, Michigan and Ohio) across various sports. The all-district teams recognize the nation’s top student-athletes for their combined performance athletically and in the classroom.

Schorsch, who holds a 3.87 GPA in geology, is one of two Division-I tennis players in the four-state district to receive the honor. He and the Crusaders will begin the NCAA Tournament on Friday with a first-round match against Michigan at Stanford.

Crusaders Take Down Oakland in Tournament Opener
A solo homer from freshman Gabby Magnifico (Elmhurst, Ill./York) proved to be the lone run the Valparaiso University softball team would need in its opener at the Horizon League Championship Wednesday afternoon, as after waiting out a lengthy pre-game rain delay, the Crusaders got a one-hit effort in the circle by junior Kenzie Grossmann (Perry, Mo./Mark Twain [Morehead State]) to take down Oakland by a 1-0 final in a rain-shortened five-inning affair. With the win, the Crusaders advance to play Youngstown State Thursday afternoon at 5 p.m.

Thoughts From Head Coach Kate Stake
“Overall, I was happy with the way we came out on day one, especially given the delays. It’s not easy to start and stop warming up, to be in and out of the rain, and to still maintain focus. Our team was able to both be focused and have fun, and once the game started, we were very locked in and loose at the same time.”

“I think we approached Kownacki better than we had in the regular season. She beat us all three games during the year, but we were prepared for her and I think our players were confident with their approaches against her today. I was pleased with our discipline for the most part, and Gabby came up with the big hit we needed.”

“Kenzie was about as good as she’s been all year for us. She’s at her best when she’s rolling ground balls and letting the defense work behind her, and almost every ball put into play against her today was on the ground. I felt like our defense played really well behind her today as well.”

Next Up
The Crusaders (28-21) look to continue advancing within the winner’s bracket of the league tournament on Thursday afternoon, as third-seeded Valpo takes on second-seeded Youngstown State. The start time for the game has been pushed back to 5 p.m., as Wednesday’s scheduled third game of the day had to be moved to Thursday due to weather. The game can be seen live on ESPN3, WatchESPN and the ESPN app, with links for the live video and live stats available via ValpoAthletics.com.