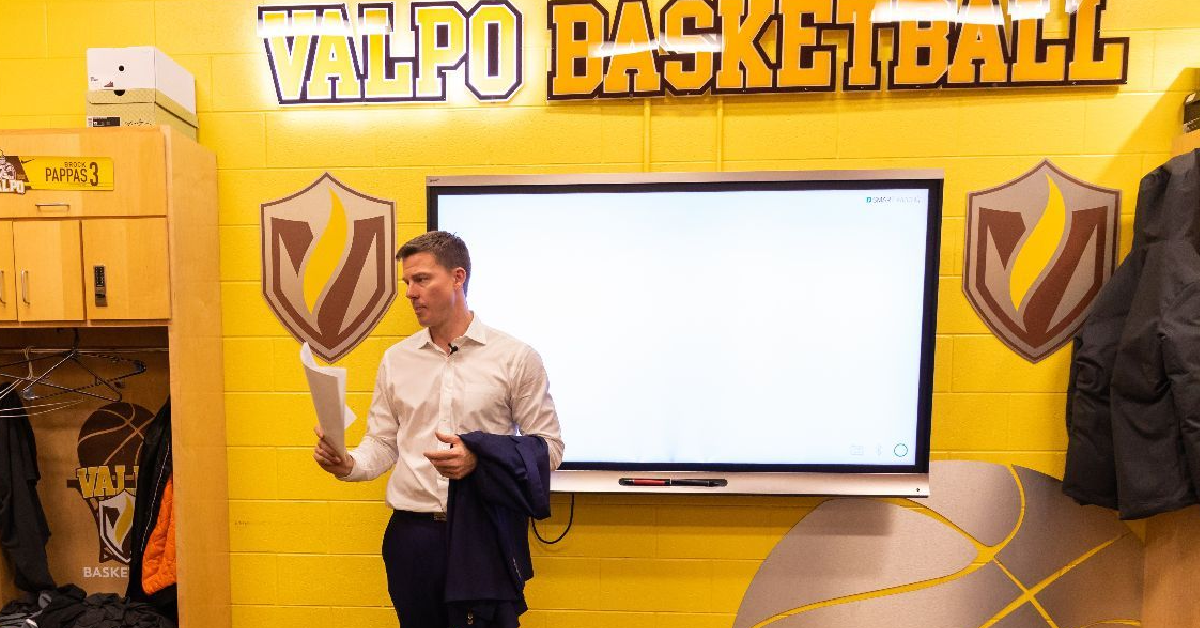 The Valparaiso University men’s basketball program and head coach Matt Lottich have announced the program’s 2020-2021 nonconference schedule. The slate tips off on Friday, Nov. 27 with a trip to Vanderbilt.

The game in Nashville commences a nine-game nonleague slate that leads into Missouri Valley Conference play. The home portion of the season will begin on Sunday, Nov. 29 as Trinity International visits the Athletics-Recreation Center.

Due to Porter County recently being changed to “red” on the state of Indiana’s coronavirus response metric map, spectator policies are still being finalized. Additional information will be communicated as soon as it becomes available.

-        The 1996 matchup was the season opener as part of the Preseason NIT, while the 2007 clash was a non-bracketed game as part of the South Padre Island Invitational.

-        Under the direction of Jerry Stackhouse, who is in his second season after previously serving as an assistant coach with the Memphis Grizzlies. Stackhouse played in the NBA for 18 seasons and was a two-time all-star with the Detroit Pistons (2000, 2001).

-        This marks the third meeting between the two teams with Valpo owning victories in each of the first two.

-        Had a five-overtime victory at Calumet College of St. Joseph last season, tying the NAIA Division-II record for most overtime periods.

-        Graduated four players from last season, but have seven returnees.

-        This will mark Valpo’s first game against a member of the Horizon League since departing the conference following the 2016-2017 season.

-        The final Horizon League matchup was a memorable one as Alec Peters became the program’s all-time leading scorer, surpassing the career mark previously held by Bryce Drew. Peters’ double-double of 30 points and 10 rebounds lifted Valpo to a 96-65 triumph on Jan. 22, 2017.

-        Despite the recent success against UIC, Valpo holds a 26-29 record in the all-times series. Valpo was just 9-29 against UIC before the start of the current head-to-head winning streak.

-        Under the direction of first-year head coach Luke Yaklich, who most recently served as the associate head coach under Shaka Smart at Texas.

-        Posted an 18-17 record last season including a 10-8 Horizon League mark. This matchup features a pair of teams that came within one win of the NCAA Tournament last season, as the Flames fell 71-62 to Northern Kentucky in the Horizon League title game.

-        Picked to finish fifth in the Horizon League preseason poll.

-        Under the direction of first-year head coach Bruce Fields, who scored over 1,000 points during his playing days at Gardner Webb.

-        These two squads will face off for the fourth straight season after having never locked horns prior to the 2017-18 campaign.

-        Valpo will look to remain unbeaten against SIUE after winning each of the first three matchups, most recently 89-76 on Nov. 12, 2019 in Edwardsville. Valpo trailed that game by 10 with 13 minutes remaining in the opening half, but flipped the script for a double-figure victory.

-        Under the direction of head coach Brian Barone, who is in his second season after capturing the program’s first-ever win at Belmont among five OVC victories a year ago.

-        These two teams renewed this matchup on Dec. 8, 2019, with Valpo running away with a 77-55 victory at the Athletics-Recreation Center. It was Homer Drew Day at the ARC as the Valpo coaching legend was recognized for his induction into the National Collegiate Basketball Hall of Fame. Valpo held a CMU team that entered the day leading the nation in scoring at 93.9 points per game to a season-low 55 points.

-        That leveled the all-time series at four wins apiece. The two teams have traded wins since the first face-off, which occurred during the 1925-26 season in Valpo.

-        Home teams have won seven straight in the all-time series, a trend the Brown & Gold will hope to buck. The Chippewas are a perfect 3-0 when hosting Valpo.

-        The team features seven newcomers and just one returning starter.

-        This marks the fifth overall meeting and the second consecutive season these two teams have faced off.

-        The two teams have split the first four meetings including Eastern Michigan’s 85-79 win in Ypsilanti on Dec. 3, 2019. Valpo trailed by as many as 12 and rallied to take a late six-point lead, but could not hold on to complete the comeback victory.

-        This will represent Eastern Michigan’s first visit to the ARC since Jan. 2, 1988. Valpo garnered a 59-57 victory in the final season under Tom Smith, the predecessor to Homer Drew.

-        Valpo erased a 14-point deficit to win, which proved to be a sign of things to come during a 2019-20 season that was filled with comebacks. At the time, that marked Valpo’s largest rally against a Division-I opponent since January 2013.

-        The all-time series is tied at six wins each, but Valpo has prevailed in five of the last six matchups. The only setback in that stretch came during the program’s most recent trip to Toledo as the Rockets triumphed 75-72 in overtime on Dec. 11, 2010.

-        Marreon Jackson is back after earning second team All-MAC honors last season, averaging 18.8 points per game and setting a school record with 99 made 3s. Spencer Littleson also returns after averaging 10.5 points per game and will be joined in the backcourt by 2019-20 All-MAC Freshman Team member Keshaun Saunders.

-        Head coach Tod Kowalczyk also coached against Valpo seven times during his stint as the head coach at Green Bay, which lasted from 2002-2010.