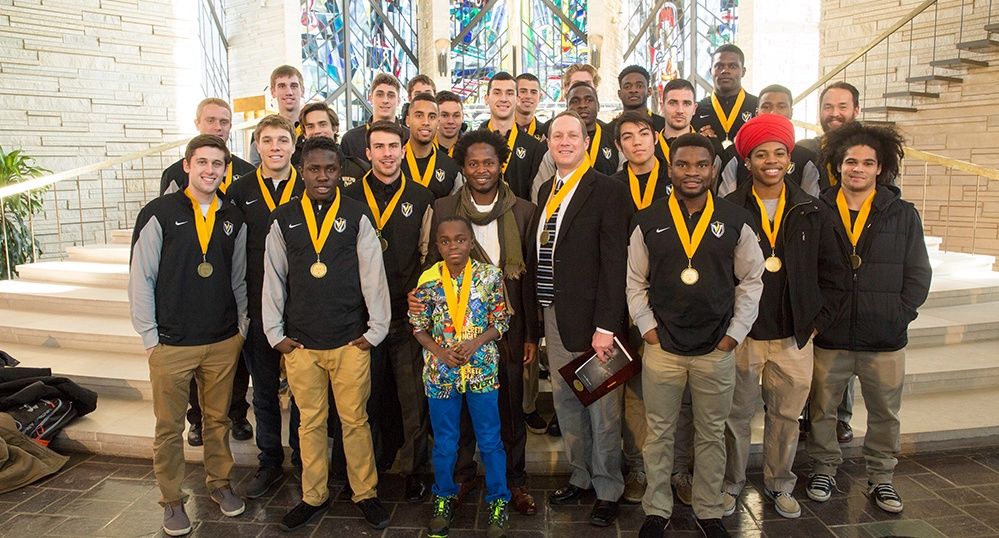 In recognition of its #oneVALPO campaign, the Valparaiso men’s soccer team received the 2015 Martin Luther King Jr. Award during Valparaiso University’s annual Convocation service as part of the University’s celebration of the life and vision of Dr. King on Monday.

Each year, as part of Valparaiso University’s annual celebration of the life and work of Dr. Martin Luther King, Jr., an award is made to the person(s) or organization(s) making significant and lasting contributions to continue to create an environment where diversity is honored and respected on campus and within the broader community.

The Valparaiso University Martin Luther King, Jr. Award provides special recognition to individuals and groups on our campus who have lived King’s vision through their words and deeds. This award is one more way to ensure that the legacy of King remains in the minds and hearts of our students, faculty, and staff throughout the academic year and not just on the MLK, Jr. Day.

After a pair of incidents last season where racial slurs were tossed out at Crusader players, the men's soccer program decided to fight back not with fists, but with an initiative. The team developed the #oneVALPO promise, which states that individuals will show respect for all others regardless of beliefs, backgrounds, etc. It also calls for the elimination of disrespectful and derogatory remarks, the education of other cultures, and to celebrate the differences of others.

#oneVALPO swept through campus, as numerous groups both inside and outside of athletics made the promise, but also has spread beyond the campus limits, as each men's soccer opponent this year made the #oneVALPO pledge and numerous community groups have joined in as well.

For more information on the #oneVALPO campaign, visit the Facebook page at https://www.facebook.com/oneVALPO.