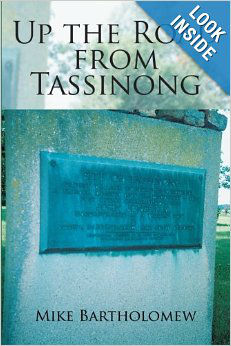 My new book, Up the Road from Tassinong, collects more than 120 of the poems I began writing while a Valparaiso High School student.

The title comes from one of my forbear's relatives co-founding "the first village in northwest Indiana," whose name is on the historical marker at the head of Baums Bridge Road south of Malden. Roughly a quarter of them, including the entire first chapter (titled "Tales of the Green and White") were written in or about Valparaiso. It wasn't until only a few years ago that I discovered what a tradition of poetry the city has, as you will see in one of the enclosed selections. I have deposited a copy of my book in the libraries of Valparaiso High School and the Valparaiso Branch of the Porter County Public Library System. It is available on amazon.com or from www.authorhouse.com (the same publisher as Bill Wellman's It's Made to Sell, not to Drink).

Some of the poems are of historical interest--my specialty as a newspaper correspondent--such as a partial account of the integration of Valparaiso High School in 1966-67, a word-picture of an early morning in town during the Steam Era, and a post-9/11 verse for "The Star-Spangled Banner.". There is also a generous selection of parodies and "deadline poems" from my days as a radio broadcaster. They include references to historical events, music, and American literature.

My father was C. Robert Bartholomew, who operated C.W. Bartholomew & Sons Funeral Home, and my mother, a transplant from Massachusetts, taught English and French for 12 years at Morgan Township High School. My grandfather and great uncle were both Mayors of Valparaiso. I am a member of the VHS Class of 1967 and am pleased to include more than a handful of classmates in my poems. Having been in the position of editor several times, I hope that you will find the selections below of interest to your audience.

The product of a morning at the Valparaiso researching a local almanac column.

Here are some samples of my poetry:

A fantasia on the Indiana State Song, updating and putting tongue firmly in cheek. Should be noted that children at Gardner School were taught both verses of "On the Banks of the Wabash" in sixth grade. Can be sung to Oh, Susanna!

Oh, I come from Indiana And I tell you, it's no lie, Everyone knows us as Hoosiers-- No one knows for sure just why.

Could be someone knocking at the door, Or that we're just quiet folk. No matter what the reason is, You see we can take the joke.

We don't sneer at sucker* neighbors, Though they often seem the worst With their "Land of Lincoln" boasting, 'Cause we know we had Abe first.

We're the Crossroads of America, That's what out motto does say, Nation's commerce speeds across our state Through the breath of new-mown hay.

'Round our Indiana homesteads See the punkins dressed in frost, Hear the squeals as Penrod teases The Girl of the Limberlost.

Candle lights along the Wabash Gleaming in the moonlight fair, Sure you've heard tell of our Brickyard Up the road from Market Square.

From the steel shores of the Calumet To the Ohio's Great Falls There's no one can be our boys on court When they pass and shoot the balls.

When La Salle called on the natives Our history was begun. Later on, Tecumseh and the Prophet, Clark and Harrison.

Colonel Brown shot up the Merrimack, We patrolled the New York streets, Took the point all through the Wilderness, But back home we put on sheets.

I had an Indiana girl, Sweetheart Mary, my true friend. In front of her stood Terry Hut, In back was a big South Bend.

I'd give my future were she here-- Why can't Hoosier drivers learn? Mary crossed a Studebaker That didn't signal for a turn.

We've got sycamores and cornfields And our woodlands clear and cool, But I'd best review my lessons now,' 'Cause I'm late for nature's school.

*Sucker: Original nickname for a resident of Illinois, after the method used by pioneers to draw water from beneath the prairie.

I know I was only one of hundreds--I know that by the pages of similar verse from fellow citizens--who had the following reaction to the front pages on Wednesday, September 12, 2001. As a former ambulance driver, I sang this solo at a First Responders Vigil at Thomas Park in Chesterton the next week. Should be noted that during the Federal period, no less than 83 sets of patriotic verses to this tune were recorded, including TWO by Francis Scott Key:

O say can you see in the morning's clear light What still proudly we hail where the towers stood gleaming? Where the sky-doom's grim scars Made the soul-daunting sight, While the Lady looked on as if with tears streaming? Banish now our despair and as one lift our prayer And with firm resolve know our flag is still there! Let all see that star-spangled banner does wave O'er the land of the free and the home of the brave.

Finally, her, despite my repeated attempts to improve on it, is what remains my most popular poem, from the first, original, production of the Valparaiso High School Drama and Debate Club's "March Madness." Patterned on "April in Fairbanks" from "Leonard Silliman's New Faces of 1956." My mother used to write similar lyrics when she was a student at Valparaiso University:

Fog, mist, and smoke cover dawn's early light; You step off a curb and you sink out of sight; And there goes a kid being dragged by a kite; It's springtime in Valparaiso!

Pigeons and starlings will come home to nest; Ducks and geese also fly north with the rest; But they'll take just one look and decide top fly west; It's springtime in Valparaiso!

Valparaiso means "Vale of Paradise;" The guy who named it sure thought it was nice; He didn't live here, or he would have thought twice About springtime in Valparaiso!