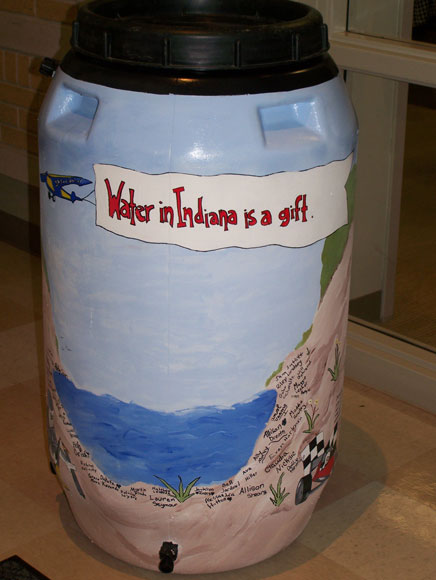 Valpo’s diligence in advancing stormwater management practices was rewarded recently in Indianapolis as the Indiana Department of Environmental Management (IDEM) recognized the city in three categories. “We were very pleased with the city’s performance and credit the collaborative efforts between multiple departments and the residents of Valparaiso, as well as partnerships with other communities,” said Mingyan Zhou, Valparaiso’s MS4 Operator. “It’s very rewarding to have the state take notice of our stormwater efforts. We’ve worked hard to serve our residents and to exceed statewide standards,” said Mayor Jon Costas.

The recognition on Illicit Discharge Detection and Elimination (IDDE) program was based on an IDEM audit conducted in 2012, on which the city earned the highest score possible, including “satisfactory” ratings on all the audited items, and “best” ratings in mapping and field screening. “The city works to manage both stormwater quality and quantity, ” said Zhou. In addition to the implementation of the Stormwater Quality Management Plan as required by the Indiana State stormwater rules since 2003, the city went above and beyond with the development of a Stormwater Master Plan in 2009 to address both stormwater quality and quantity issues. This plan evaluated locations based on six categories (Location, Risk, Impact, Cost Effective, Environment, and Term). Based on these criteria, the city has added 17 projects to its schedule, designed to reduce flooding, basement sewer backups, and pollutants that could ultimately reach waterways. “Water quality is very present in our minds as we work to design these projects with the overarching goal of eliminating flooding concerns for our residents,” said Adam McAlpine, the city’s Stormwater Engineer regarding the Stormwater Master Plan.

“We work to reduce flooding and stormwater pollution, and to help people learn how to do their part as well when it comes to stormwater management, ” said Zhou. The city was also recognized for its well-received educational program, in which it partnered with the Recycling and Waste Reduction District of Porter County and other MS4 entities in Porter County for a School Rain Barrel Decorating Competition at the 2013 NWI Earth Day Celebration Event. The event was designed to communicate stormwater management and environment protection messages to students, parents, and event participants. A total of 25 rain barrels were decorated by students from 18 schools, and were displayed at the Earth Day Event to more than 2,000 participants. The award applauded the scale, partnership, and successfulness on this program.

Photo caption: The City of Valparaiso has been recognized by the Department of Environmental Management for its stormwater management practices, including a rain barrel decorating competition, which drew 25 entries from 18 local schools. Students at St. Paul Catholic School in Valparaiso designed this barrel barrel.