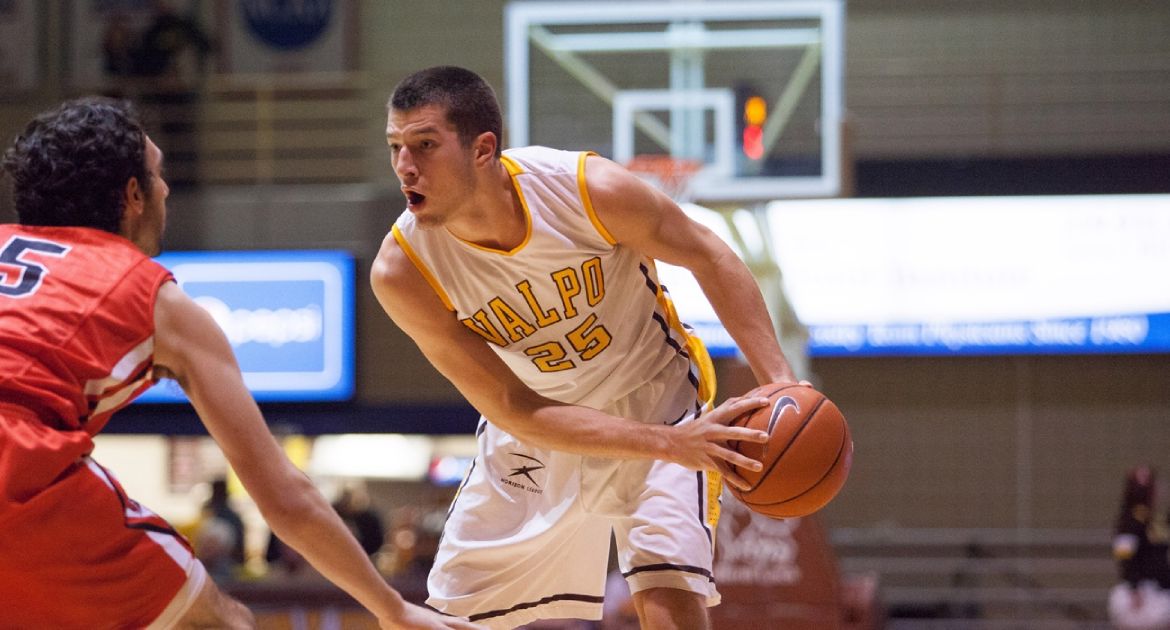 Next Up in Crusader Basketball: Valparaiso hits the halfway point of the Horizon League slate on Monday evening as the Crusaders host Milwaukee at the ARC. Monday’s game starts a stretch of four home games out of five contests for Valpo.

Last Time Out: The Valparaiso men’s basketball team had two chances to take the lead inside the final 20 seconds Friday evening in a battle of league leaders at Green Bay, but couldn’t get either shot to fall, as the Phoenix earned the 51-50 victory over the Crusaders. E. Victor Nickerson led Valpo with 10 points, but was unable to hit a runner in the closing seconds.

Head Coach Bryce Drew: Bryce Drew (84-40) is in his fourth season at the helm of the Crusader men's basketball program in 2014-15. In his first three years, Drew led Valpo to 66 victories and postseason berths in each of his three seasons. The 2012 HL Coach of the Year, Drew ascended to the head coaching position on May 17, 2011 after spending six seasons as an assistant and associate head coach with the Crusaders.

...notes from Green Bay
The loss was the Crusaders’ first by one point since an 81-80 overtime loss at Green Bay on Feb. 21, 2011.
Valpo posted a defensive efficiency of 84.3, its best defensive efficiency in a loss since Nov. 15, 2012 at Nebraska.
The Crusaders went a stretch of 5:09 without scoring in the second half.
On the other hand, Valpo held Green Bay scoreless for a 6:47 stretch in the second half as well.
E. Victor Nickerson paced the Crusaders with 10 points Valpo is 0-2 this year when Nickerson leads the team in scoring.
Alec Peters was held to nine points the Crusaders are now 1-4 when he scores in single digits this season.
Valpo held Keifer Sykes to just 11 points on 4-of-17 shooting, by far his worst performance in #HLMBB play this season.

...looking ahead
@ValpoBasketball has five days until its next game, a road trip to UIC on Saturday afternoon.
The Crusaders then play three straight games at home, starting with a game against Detroit next Wednesday, Feb. 4.

...at the ARC
@ValpoBasketball has 14 regular season home games scheduled for the ARC in 2014-15. #ValpoGameday
The Crusaders posted a 12-6 mark at the ARC last season, and are now 8-1 at home this year following the win over Cleveland State.
Over the last 20+ years, @ValpoBasketball owns a 243-57 (.810) record on its home court.
The Crusaders are 22-6 in home #HLMBB games under Bryce Drew.

@MKE_MBB
Milwaukee enters Monday’s game at 7-13 overall and is 2-4 in #HLMBB play after a 66-53 loss at Oakland last Thursday.
The Panthers are 0-9 this season in true road games.
Senior point guard Steve McWhorter leads Milwaukee, averaging 14.2 points and 3.9 assists per game.
Junior Matt Tiby adds 11.7 points and 7.5 rebounds per game.

Up to 18 Wins
@ValpoBasketball reached 18 wins on the year with the win at Youngstown State last Tuesday.
The Crusaders are one of just eight programs nationally with 18 victories as of the end of play on Saturday.
This year’s Valpo team has reached every win from 10 through 18 earlier in the calendar than any other team in program history.
The 2007-08 squad earned its 10th win on Dec. 15, the only other team in program history to hit 10 wins before Christmas.
This year’s team has already matched last season’s final win total.

Poll Thoughts
For the first time this season, the Crusaders are receiving votes in the USA Today Coaches Poll.
Valpo checked in with four points in Monday’s poll, the only #HLMBB team receiving votes in either poll.
Earlier this season, the Crusaders picked up a vote in the Dec. 22 Associated Press top-25 poll.
Valpo is ranked sixth in the most recent iteration of the College Insider Mid-Major Top 25 and has been as high as fourth this year.

Hitting the Glass
Valpo has out-rebounded opponents by double figures 10 times on the year, including a +21 edge last Saturday at Wright State.
The +21 margin was the Crusaders’ best against a D-I opponent since a +22 advantage on the glass last year against Saint Louis.
By contrast, the Crusaders have only been outrebounded on two occasions losses to New Mexico and Missouri.
The Crusaders’ league-leading rebounding margin sits at +8.4, good for 13th in the nation.
Valpo leads the league in rebounding margin by nearly five boards, and also paces the circuit in both offensive and defensive rebounding pct.

Defensive Prowess
The Crusaders gave up just 51 points last time out and haven’t given up more than 64 points in their last six games.
Valpo held three straight teams to 56 points, the first time it has won three straight games and given up 56 or fewer points in all three since Dec. 7-17, 1983.
Valpo ranks 36th nationally in scoring defense and 16th in field goal percentage defense.
Valpo boasts a defensive efficiency of 92.7, 36th-best nationally the Crusaders haven’t ranked in the top-100 since 2006-07.
Crusader opponents are shooting just 41.8% from 2-point range (12th nationally) and are pulling down just 25.9% of available offensive boards (21st nationally).

On Pace for 1,000
Sophomore Alec Peters is nenar pace to become the first sophomore in Crusader history to reach the 1,000 point milestone.
Peters enters Friday’s game with 816 points and would need to average 18.4 ppg over the Crusaders’ guaranteed 10 remaining games to hit 1,000.
For comparison, Bryce Drew had 912 points through his first two seasons in a Valpo uniform.
Peters has scored 20+ points nine times already this season, tied for the lead among #HLMBB players.
Peters’ .463 3-point percentage this year would rank fifth in a single season in program history.